WESTIELD – For the last decade, nobody has been better in the western half of the state at high school gymnastics than the Westfield Bombers.
Westfield won its 10th straight west sectional a year ago and entered this season carrying an unprecedented 173-0 record, but on Oct. 17 Minnechaug stunned the local gymnastics world with a monumental upset of the Bombers. The Whip City streak ended at 179-0.
Minnechaug proved it was no fluke though, officially ending Westfield’s long-time stranglehold on Western Massachusetts with a victory at the West Sectional Championships. The Falcons flew past the Bombers Saturday at Westfield High School to take over as the new champ. 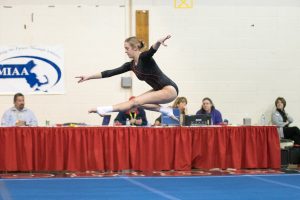 Minnechaug posted a team score of 134.125, besting Westfield (132.775), Hampshire (129.0), Agawam (121.35), and Chicopee Comprehensive (117.775).
“We wanted to pull it out, but we didn’t,” Westfield coach Angela Henrickson said. “The better team finished first tonight. …“We were riddled with injuries; we were riddled with illness – strep throat, concussions, (bad) ankles. It felt like a storm on us.”
Minnechaug produced two of the night’s best all-around performances in Kyla Miller and Samantha Druckenmiller. Miller won the competition with a score of 35.25; Druckenmiller was second (34.525).
Westfield senior Mairead Hagan claimed a bronze medal with a 34.175.
“Mairead – she’s our veteran,” coach Henrickson explained. “She did such a good job keeping her composure tonight. There was a lot of uncharacteristic errors on bars and beam and Mairead was able to keep calm. She showed her experience tonight by just keeping it together and staying composed.”
Hagan finished second on the balance beam (34.175) and fourth on the uneven parallel bars (8.45), tied for sixth on vault (8.35), and placed seventh with her floor routine (8.675).
“We knew it was going to be a close one coming into this,” Hagan said. “We gave it our all. We tried.”
Hagan’s long-time training partner, freshman Kylie Liptak also posted an impressive fourth-place all-around finish with a 33.6. The two trained at a local gym for quite some time.
Liptak claimed first on the bars (8.725), and eighth on vault (8.275), floor (8.65), and beam (7.95).
“I was confident … but a little bit nervous,” said Liptak, who just this past week fully returned to action after missing nearly half the season with an ankle injury. “Even though our team didn’t win, we will come back and get (Minnechaug). We’ll be OK.”
Liptak earned the praise of her head coach.
“She’s been back on all four events for barely even a week so for her to be a freshman coming in here and just being really confident, it was really nice to see,” Henrickson said. “We’re really happy and proud of her, both of them.”
Westfield produced several other top 10 finishers: Caitlin Daniels (vault/2nd/8.75; bars/8th/7.45), Miranda Wozniak (beam/6th/8.05), Avery Farquharson (bars/7th/7.65), Courtney Berry (floor/9th/8.625), and Kealyn Matuszczak (vault/9th/8.25).
Westfield’s gymnasts and coaching staff praised Minnechaug for its impressive outing, but vowed vengeance, of sorts.
“Next season, we got a new streak to start,” Henrickson said. “Everybody starts at 0-0 at the start of the season so we’re going to hope for another undefeated one. …We’ll be looking forward to it. We’ll be ready.” 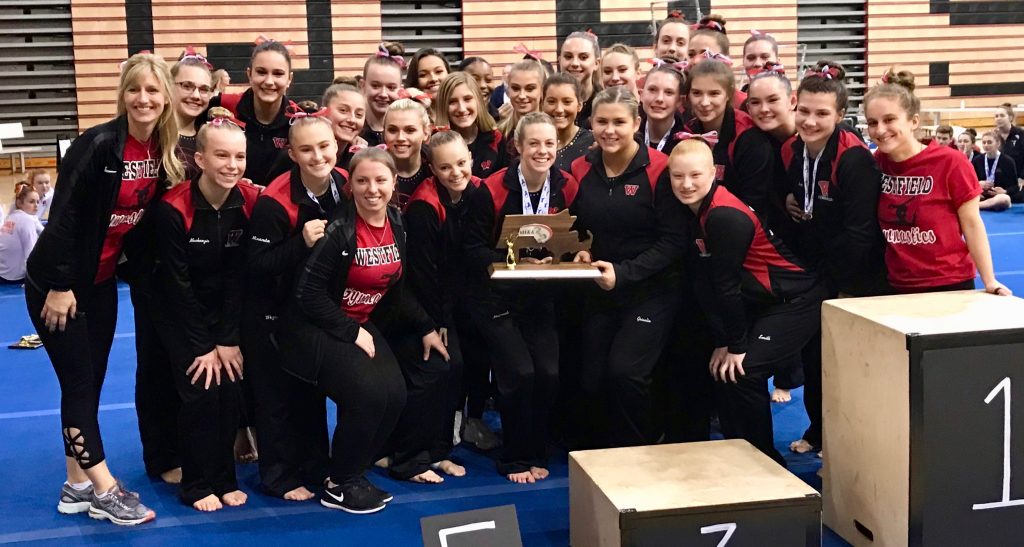