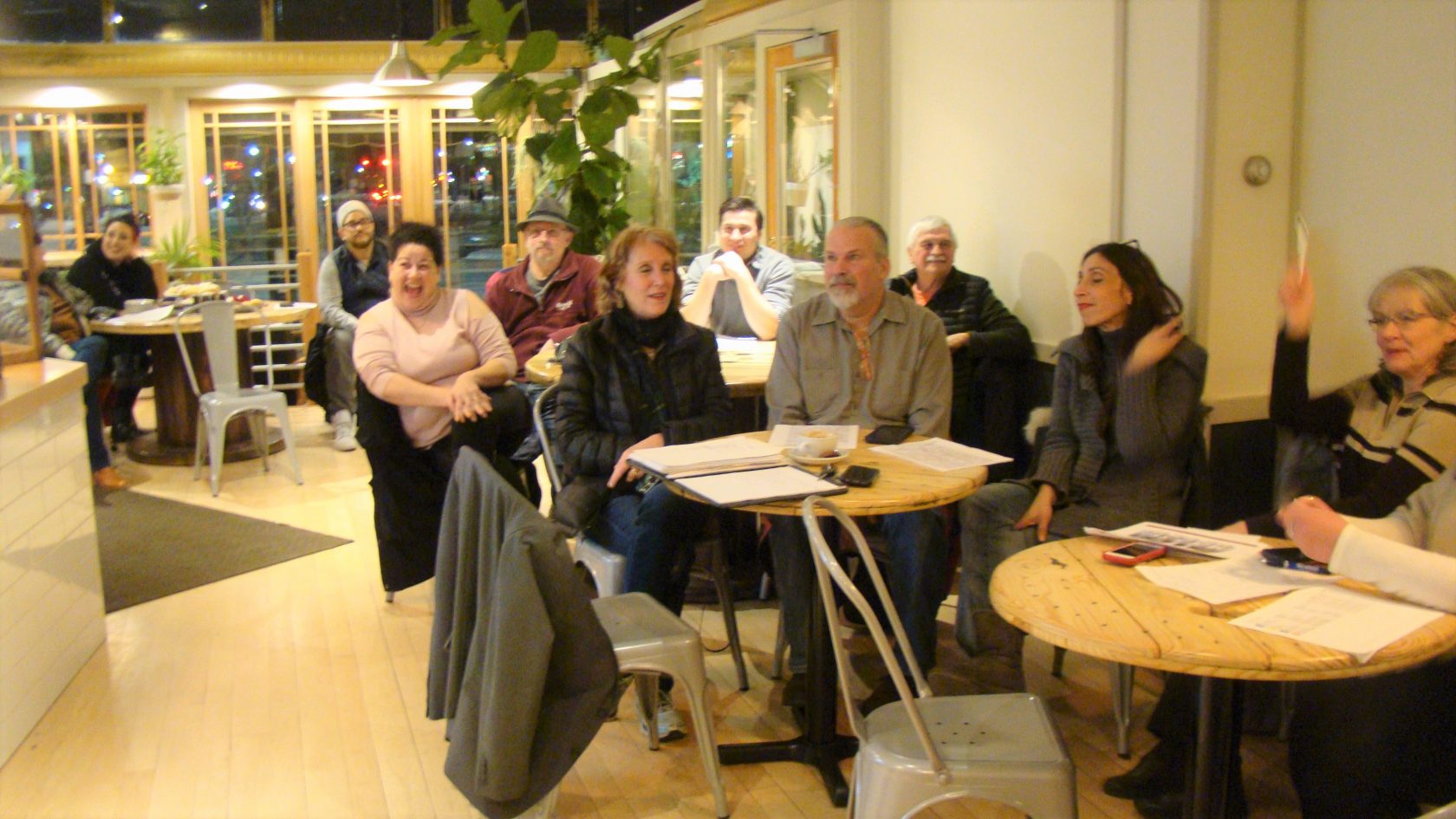 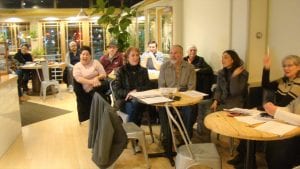 WESTFIELD – Go Westfield, a marketing initiative for Westfield started last year with partners Westfield Gas + Electric, Greater Westfield Chamber of Commerce, Westfield Bank and the City of Westfield, held the first of a series of focus groups for small businesses at Circuit Coffee Monday evening.
Westfield Community Development Director Peter J. Miller said the campaign was rolled out with regional real estate establishments, to put together a positive story about what’s happening in Westfield. “We’ve done a lot of work around infrastructure,” Miller said, adding, “We’re trying to get a big picture to find out what we can do to market ourselves collaboratively.”
“We the City have a good story, but if we keep it to ourselves, nobody’s going to know about it,” said City Advancement Officer Joe Mitchell. He said Go Westfield is intended to be one-stop-shopping for anyone who has an interest in Westfield. He said the City Council suggested they get feedback, and have planned four or five focus groups with different constituencies.
“You’re the first,” Mitchell said to the business owners at the meeting, who included Ted Dobek of Circuit Coffee, Al Liptak of Kirby Production, Andrea Bruno of Blended Vintage Marketplace, photographer Danny Nason, Lex of Gaslight Barbers, Awilda Colombani of A Slight Edge Hair Salon, Don Podolski of New Horizon Bikes, and Kendrah Elise of Frankenhair. Whip City Music owner Doug Cotton announced that he and his wife Sally Cotton had just opened a new restaurant, Yummi Noodle, at 160 Elm St. on Monday.
“So we’ve got a new noodle shop, hours old,” commented G+E Marketing Director Lisa Stowe.
Miller asked the business owners to talk about things they are celebrating about their businesses in Westfield.
“The ability to see that we fill a space in the community,” said Dobek about Circuit Coffee. He said customers tell him they feel like they’re in Northampton or New York City. 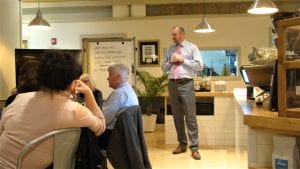 Miller said people who have opened businesses in the last few years are young and motivated. “The business community is getting younger. For a lot of years, you couldn’t say that about Westfield,” he said.
“I think Blue Umbrella Books has been a great addition, something we needed,” said Cotton. He said the bookstore brings in authors, and Westfield has a lot of local writers.
Miller said that Bill Westerlind of Artworks of Westfield has helped to define a new segment of the arts community. Dobek added that Circuit Coffee’s Saturday jazz programs bring in a good crowd. “In the summer we open the doors, for the people walking by,” he said.
“We’re looking to activate the sidewalks as best we can. The City Council passed a sidewalk cafe ordinance last fall. That’s something we’re excited about,” Miller said.
Nason said the arts themselves have come alive, and mentioned Fourth Friday concerts in the parking lots, and Art Walks.
“The best thing for me with my business was hooking up with you, that my city needed me,” said Liptak of Kirby Productions at the Mill at Crane Pond, which made the video featured on the Go Westfield website. “It’s always a struggle to get small businesses to hire a video production company. I think there’s a lot of possibilities; there are a lot of great businesses that I would like to connect with. Even the Art Walks. All these things happening,” Liptak said.
“I’ve noticed an increase in businesses downtown. It’s really flourishing,” said Lex of Gaslight Barbers.
Mitchell asked whether their impression was that the city is pro-business.
Kendrah Elise of Frankenhair at 36 School St. described her new shop as the first organic and cruelty-free unisex salon in the city. “It’s been really great; everyone’s been really receptive,” Elise said. She agreed that parking and the electric deposit were issues.
“My last tenant complained about how difficult it was to start in Westfield, including the large deposit for electric service,” said Podolski, who said he owns several properties downtown.
Caitrin Ferriter, Key Accounts manager at G+E said the meter deposit for businesses that don’t own the building can be waived, if they have excellent credit at their previous utility. “It’s a protection for us if a business goes bankrupt. The deposit covers the outstanding debt,” Ferriter said.
Greater Westfield Chamber of Commerce Director Kate Phelon said a big picture for companies coming in, is how to get that message out. Podolski said he referred his tenant to the Chamber of Commerce, but Phelon said she did not get in touch.
In response to the challenges of opening a business, Miller said when a business owner is required to go before a public board to get their license, it’s a six to eight week process. Miller said he believes it’s something they can work with the city on, such as in cases where there are no questions or controversy, raising the possibility of eliminating sending a licensee through sub-committee meetings.
Doug Cotton said with the Yummi Noodle license, it was sent to a sub-committee that wasn’t meeting that month. “It took forever,” he said.
Mitchell said that small business owners need to get their voices heard.
Liptak said for him, driving downtown and seeing that all the storefronts are insurance and lawyers; places that don’t need storefronts, gives the appearance there is no place to go. “That is changing now,” he conceded.
Miller said the city needs to make it financially better for professionals to rent out their space and move upstairs. He said right now, if a business wants to go downtown, “It’s next to impossible to put a business on Elm or Main Street.” He said there are two available buildings, including the Bank of America which he said wants to sell, not rent; and the old Bentley Billiards building, which he said has some issues.
Cotton noted that his block was still waiting for Whip City Fiber. 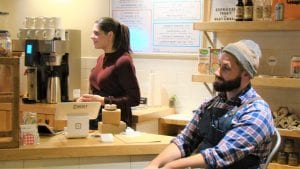 Stowe said that the Elm Street block from the G+E building to Franklin Street is on the list for buildout. She said that with the $15 million bond they got a few years ago, they said they would build out 70% of the city, which is where they are today. She said now they have to stop and pick up people in that 70% to pay for the rest of the buildout.
“We are successfully at 70% of Westfield, and working hard to meet the demand,” Ferriter said.
Answering the question about what keeps business owners up at night, Colombani of A Slight Edge Hair Salon said parking is a problem. “Clients have to drive around for half an hour,” she said.
“This is the most challenging block for parking,” Miller acknowledged. He said in the next couple of weeks, he will be looking for money to improve and add spaces to the parking lot where the bowling alley used to be, and also the lot where the building was torn down on Central St.
Colombani suggested that all the banks get together to help the city with parking.
Mitchell said the problem with parking is not that there are not enough spaces, but rather knowing where they are. Miller said the parking lots are behind the buildings, which are for the most part three hours free parking. He said on-street parking is currently one hour, but they are advocating for two hour on-street parking.
“The primary problem area is from Circuit Coffee to Franklin St,” Miller said. He said the primary focus for a new grant from the state for $25,000 for wayfinding signage is going to be directing people to where to park. The signs will also direct people to public spaces, such as the Westfield Athenaeum, Westfield State University, and the Columbia Greenway Rail Trail. He also wants to use signage to direct people coming off of the Rail Trail.
Miller said his wish list is $75,000 for signage, and he currently has $25,000.
Dobek said what keeps him up at night is accessibility for people. “There’s a lot of traffic that comes through downtown.” He said he is concerned for pedestrian safety, and asked whether there is a way to slow traffic.
Phelon said Westfield Police Chief John Camerota was willing to look at 25 mph downtown. Mitchell said adding more speed bumps is another possibility.
Miller said future focus groups are also going to be held with manufacturers, developers and real estate professionals and non-profits, and thanked the small business owners for participating.