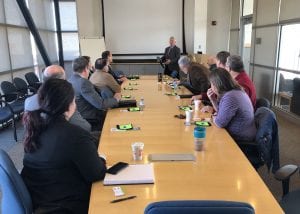 Go Westfield is a marketing initiative launched last year with partners Westfield Gas + Electric, Greater Westfield Chamber of Commerce, Westfield Bank and the City of Westfield. Its goal is to communicate to people outside the region that Westfield “is an attractive location to grow a business and an exceptional place to live, work, and play,” said Mitchell. 20% of the campaign is marketed internally to the city, and 80% to site selectors, to attract new business to Westfield. Besides the GoWestfield.com website, which has an upbeat promotional video about the city, ads are being placed in trade magazines and online venues.
The first forum was held with downtown retailers and small business in January.

Tuesday’s meeting began with a screening of the Go Westfield promotional video, and asking those present for their comments on doing business in Westfield. Mitchell said it was a good sharing experience for all of the manufacturers.
“We learned a significant concern for these companies is having a properly trained workforce,” Mitchell said, adding that for some of the precision manufacturers, employees need specific skills; however, even companies with jobs requiring traditional skills said they were struggling to fill positions. He said some companies are seeking out non-traditional avenues to meet their workforce needs, through non-profit and state agencies.
Mitchell said several of the representatives talked about WE2BA, the Westfield Education to Business Alliance between the Chamber of Commerce and Westfield Public Schools that has been focusing on preparing students with essential skills and job readiness. “They had a lot of good things to say about that, and believe they will see the results later and reap the benefits,” he said.
Another consensus by the companies was that Westfield as a city has to focus on its gateways — major roads leading into the city, primarily 10-202, Route 20 and the turnpike. They stressed the importance of signage, appearance, tidiness and road condition as being the first impression of the city to visitors.
“We, as a city, want to put our best foot forward,” Mitchell said.
Ed DeBartolo, President and COO of Angy’s Landolfi Food Group made the point that there are a lot of small to mid-size manufacturers and food manufacturers that might consider Westfield as a location for their business. Mitchell said the Go Westfield team thought that might be a good fit. “We are now going to tailor a message to small to mid-size manufacturers and food manufacturers, and to promising start-up companies,” Mitchell said.
“I’m proud to be part of a business community whose proactive approach to both community and business development extends beyond the larger more economic contributors and places equal value on small to mid-size businesses,” DeBartolo said after the forum.
The next two scheduled focus groups will be for non-profits, and for realtors and developers, Mitchell said.