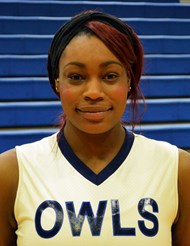 NORTHAMPTON – A career-high 17 points from first-year Lauren Bondi (Burnaby, BC, Can./Notre Dame Secondary) propelled the Smith basketball team to a 97-74 non-conference win over visiting Westfield State Saturday afternoon.The Pioneers improve to 3-5 on the season, while the Owls drop to 5-4.
Bondi, who also added four assists, led a quartet of Smith players who scored in double figures. Kennedy Guest-Pritchett (Fairburn, GA/The Lawrenceville School) made the most of her time on the court as she finished with 18 points and nine rebounds in 13 minutes of play, while sophomore guard Meghan Holland (Atherton, Calif./Sacred Heart Prepatory) added 12 points and seven helpers. Erin Hanley (San Francisco, Calif./St. Ignatius College Prep) had another solid night off the bench, producing 12 points, while grabbing eight boards. Paige Marquez (San Francisco, Calif./St. Ignatius College Preparatory) shot 4-of-7 from the field for eight points, and six rebounds.

Westfield State got a solid game from Forbasaw Nkamebo (Amherst/Amherst, Mass.), who poured in 15 points on five-of-six shooting, to go with seven rebounds. Jill Valley (Mahar/Orange, Mass.) led the Owls with 16 points, while Alyssa Darling (Palmer/Palmer, Mass.) and Rebecca Sapouckey (Granby/Chicopee, Mass.) each contributed 10 points. Darling added three assists and two rebounds and Sapouckey hauled in five rebounds.
Trailing 12-9, Bondi hit back-to-back treys and Tia Karapoulios’ (Cypress, Calif./Cypress) layup gave the pioneers a five point lead (17-12) with 2:56 left to play in the first.Paige Marquez (San Francisco, Calif./St. Ignatius College Preparatory) beat the first quarter buzzer with a floater as time expired to give Smith their largest lead (26-20) going into the second period.
Smith used a 10-0 run in the middle of the second, including five points by Karapoulios,to extend their lead to 18 points (45-27) with 4:38 on the clock. Both teams would go into the break with Smith holding a 50-36 advantage.
Westfield State owned the beginning of the third quarter, outscoring the Pioneers 16-6 over the opening six minutes of the second half to cut the lead to 56-52. Smith would regroup and end the third on a 16-7 run. The Pioneers lead would climb to as large as 26 points on a Katy McClellan (Palmyra, PA/Palmyra Area) free throw with under a minute left to play.
The Pioneers had their best shooting day of the season, connecting on 54.4 percent (31-57) from the field and 50.0 percent (7-14) from 3-point range, while also controlling the boards 52-36.
Smith is off until December 30, when the Pioneers travel to Claremont, California for a match-up against Claremont McKenna College. Tip-off is scheduled for 8 p.m. eastern time. Westfield State will play University of Saint Joseph on January 2 in the Westfield State Holiday Tournament.