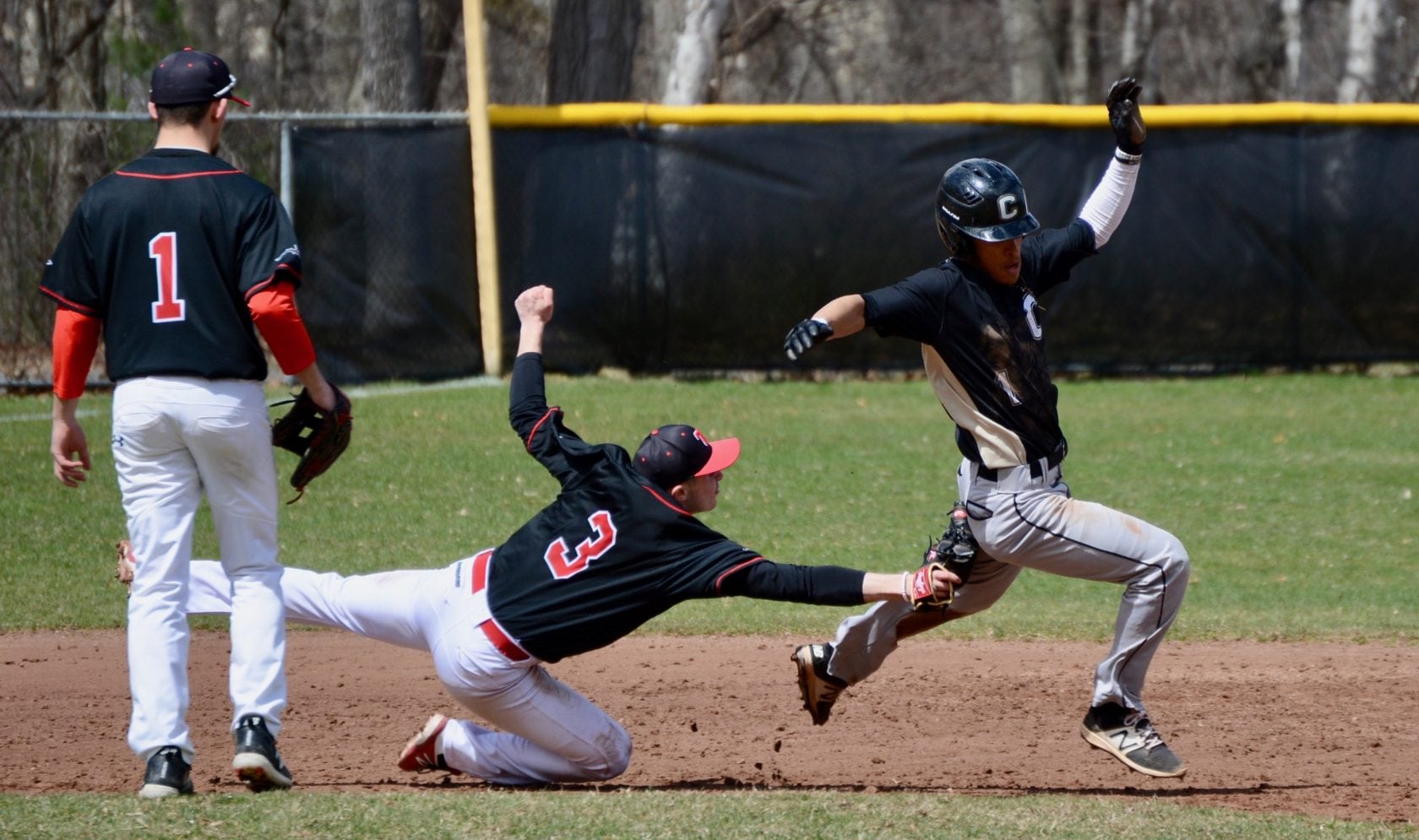 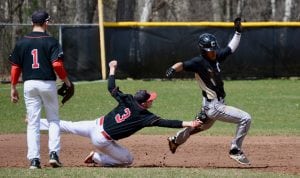 Westfield pitcher (3) Aidan Dunn makes a diving tag out to complete the run down of a Central base runner. (Photo by Chris Putz)

SPRINGFIELD – The Westfield High School baseball team continues to be snake-bitten in the latter innings of ball games in the early going of the 2018 season.
On Friday, Central rallied from three runs down to stun Westfield 5-4 at the Golden Eagles’ home park. The Bombers committed three errors.
Westfield took advantage of Central starting pitcher Jonathan Applebee’s wildness in the first inning – Applebee walked the bases loaded from the get-go – going up 2-0.
Westfield took a 3-0 lead with another run in the top of the third inning, but Central tied it in the fifth. The Bombers reclaimed the lead in the top of the sixth 4-3. The Golden Eagles responded again, this time with the tying and game-winning runs in the bottom half of the sixth.
Westfield only managed five hits.
Jimmy Hagan led Westfield at the plate, going 2-or-3 with a double, walk, and run. Bombers’ Jack Blake blasted a triple.
Westfield pitcher Aidan Dunn allowed five runs (only one earned) on three hits in 5 1/3rd innings. Dunn struck out six batters and walked seven. Bombers’ reliever Kyle Roberts (1 K) recorded two outs in 2/3rd of an inning.
It was the second time in four days that Westfield wasted a comfortable lead. On Tuesday, Northampton exploded for eight runs in the sixth inning to rally past the Bombers 11-7.

Tigers maul Franklin
Westfield Tech 11, Franklin Tech 2
Cade Bradley (4-for-4, 4 RBIs, run), Andy Daniels (1-for-3, 3 runs), Trent Adam (1-for-4, 2 RBIs), and Mateo Sanchez (1-for-2, RBI, 2 runs) led Westfield Tech’s hit parade.
Westfield Tech sophomore Sean O’Keefe and freshman Derien Wilson-Grant both got a hit, their first on varsity.
“We had 12 hits which was surprising,” Westfield Tech coach Bob Eak said. “We worked on a lot of different hitting approaches … and that seemed to pay off today. We started right out hitting and never let up.”
Daniels was solid on the mound, allowing just one hit and one run (unearned) through six innings. He struck out eight batters and walked five. Rams’ freshman Riley Sullivan yielded one hit and one run in one inning. He struck out two and walked two.
Westfield Tech improved to 2-1 overall, 1-0 league.

SOFTBALL
Gators stomp Franklin
Gateway 18, Franklin Tech 6
Stephanie Paiva, Audrey Gamble, Allison Manos, and Makala Gogal each had base hits in a rout for Gateway. Gamble earned the victory on the mound.