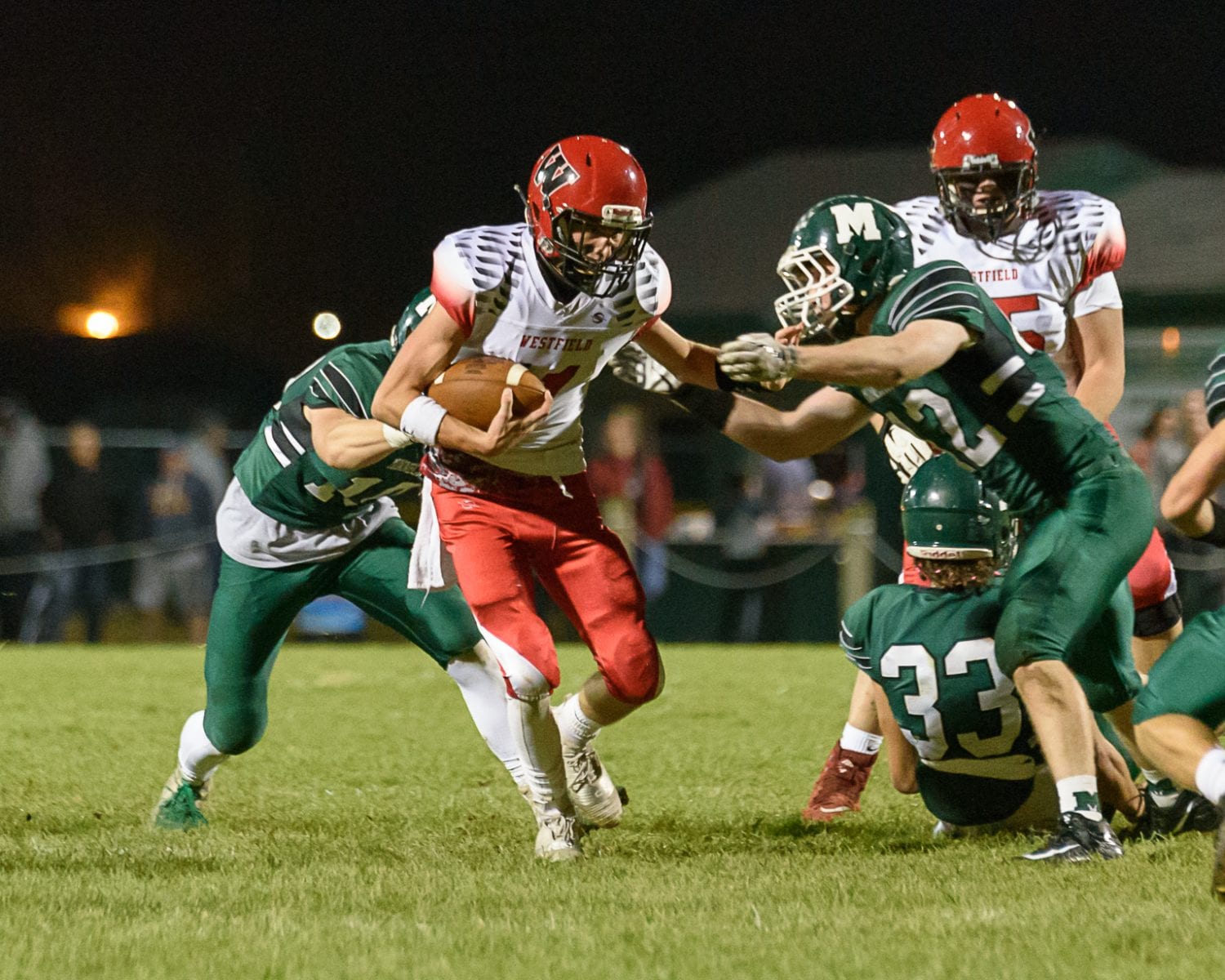 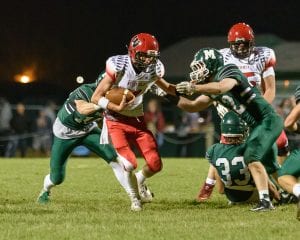 WILBRAHAM – What losses?
No. 3 Westfield put their only two losses (Central, Longmeadow) of the 2018 season in the rearview mirror in convincing fashion Friday night on the road, overwhelming second-seeded Minnechaug in a West Division 2 semifinal 27-6.
Westfield senior quarterback Mike Nihill engineered four scoring drives, scoring three touchdowns (2 passing, 1 rushing), including two short passes to wide receiver Baley Collier that went for the distance.
“It took hard work, it took knowing where they line up, where they’re going to be, where we’ve got to block, where we’ve got to execute, communication, and just playing our game … staying on line,” Nihill said.
Westfield came out with one linear focus from the outset.
The Bombers (7-2) built a 14-0 first quarter lead with a five-yard touchdown run from Adam Boggs with 5:37 remaining in the quarter, and a 50-yard scoring strike from Nihill to Collier. Collier caught the ball out near the line of scrimmage and coasted to the end zone as the final seconds of the quarter ticked away.
After two scoreless quarters sandwiched around the half, Nihill found Collier for another long scoring play to open up the fourth quarter. The score gave Westfield a three-touchdown lead, 21-0, with 10:43 left.
Nihill scampered for a long TD run midway through the fourth quarter to effectively end the contest and send the Bombers into next weekend’s championship against the top-seeded Central Golden Eagles.
“I think our guys all year and all offseason, and the summer things we’ve done, it’s been Westfield vs. Central all summer long,” Westfield coach Rob Parent said. “I think we knew we were going to get ourselves back to this point.”

GIRLS SOCCER
WEST DIVISION 3 FIRST ROUND
Rams defend home field
No. 5 Southwick 2, No. 12 Frontier 0
Southwick dominated time of possession, and came away with a relatively easy victory in a tournament opener.
Emily Giancola scored the first Southwick goal at the 28:00 minute mark, sneakily lofting a softly hit short floater over the goalie into the underside of the crossbar and the back of the net. Brooke Waitt assisted.
Malleigh McGivney tacked on an insurance goal for Southwick in the second half on a pass from Jordyn Demyon.
“We were being aggressive, getting to the ball, and not giving them the opportunity to transition on offense,” Southwick coach Todd Downie said.
Southwick goalie Hannah Gerrish (7 saves) preserved the shutout with a diving save on a penalty kick. Gerrish and her defensive mates were tested in a brief spurt early on when Frontier peppered the Rams’ goal with nearly a half dozen shots in a 30-second span.
Southwick outshot Frontier 21-8.