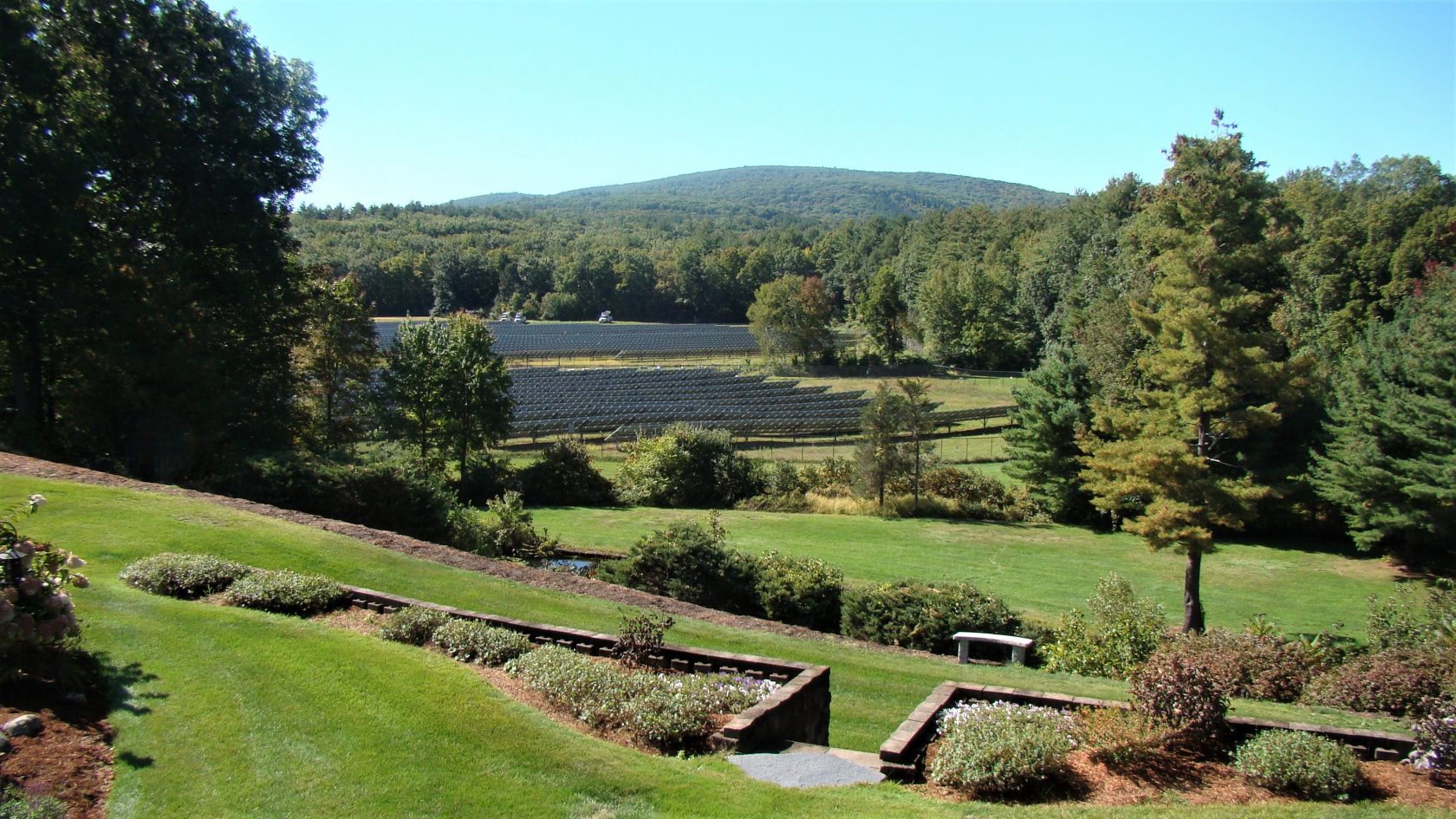 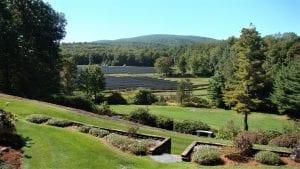 A view of the Sunfarm solar array from Stephen and Susan Oleksak’s home on Western Avenue. (Photo by Amy Porter)

WESTFIELD – Passing by Green Meadow Lumber on 994 Western Ave., one would never guess that there is a 10-acre solar farm on the property.

The solar array is laid out neatly on a former hayfield below the house of Stephen P. and Susan M. Oleksak, which also cannot be seen from the road, and is now an integral part of their 38-acre property. On another 15 acres behind theirs is the saw mill and lumberyard, a business started in 1934 by Oleksak’s grandfather. His great grandfather also worked in the saw mill business, going back to 1890.
Last year, Oleksak leased the 10 acres for the solar array to Sunfarm Solar, LLC for 20 years, with some extensions. Originally, he had in mind putting in the array himself to run his saw mill. He said after going to the Big E, and learning about the amount of land needed, it seemed to make sense. After getting all the permitting, he sold the land lease to Sunfarm.
Last February, the City Council voted unanimously to authorize Mayor Brian P. Sullivan to sign a payment in lieu of taxes agreement with Sunfarm Westfield, LLC and the Oleksaks, for a solar array on the property . At the meeting, it was reported that the array will net the city $29,999 per year for the next 20 years. 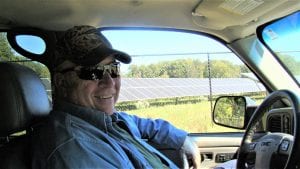 Stephen Oleksak of Green Mountain Lumber on a drive past the solar farm. (Photo by Amy Porter)

Sunfarm Solar is one of the longest-operating solar energy companies, installing nearly 500 solar systems in the commercial, residential, non-profit, education and agricultural markets. It owns and operates systems in New Jersey, Massachusetts, Rhode Island, New York, Connecticut and Puerto Rico.
“The industry term is about 20 MW of power that we own and operate. The Westfield facility is one of the largest; a 2.4 MW facility. It should produce 3.2 MW electricity a year,” said Sunfarm Chief Operating Officer Thomas Garcia.
Garcia said the Westfield facility has been up and operating since June of 2018. He said in this case, Westfield Gas & Electric offtakes all of the electricity for the Westfield Housing Authority. Most of what Sunfarm Solar does is rooftop installations on industrial buildings.
“Everything has gone smoothly. We have a great relationship, and a good working relationship with G&E. They have been great to deal with. It’s a nice field, nice property, nicely laid out,” Garcia said.
When Oleksak asked him about the future for solar, Garcia said the industry is in a little bit of a holding pattern due to economics and the cost of panels. He also said Massachusetts has become of the friendliest states for solar.
“He’s a great business partner; we love working with him,” Garcia said of Oleksak.
“I just love seeing things accomplished,” Oleksak said.
Getting things accomplished is Oleksak’s way. In talking about his property, he said he used to do all the work on it himself. Now he gets some help from the guys at the saw mill. Still, after leasing the land to Sunfarm, he purchased a 16-foot wide mower to mow the array for them. 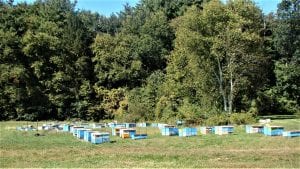 Oleksak has also leased some of his land past the solar farm for beehives. (Photo by Amy Porter)

Just beyond the array, Oleksak pointed out bee hive boxes on land that he is also leasing out. He said the private owner brought some of the bees in from California this spring, and rents bees out to pollinate orchards, selling the honey, pollen and wax, and queen bee colonies.

“My whole career has been logging and forestry. I’m extremely conscious of the environment,” Oleksak said.
He has lived in Westfield all his life, except during a four-year stint in the Navy, when he lived in Newport. Following the Navy, he lived on Laura Drive for 10 years, before moving to the Western Avenue property.
Oleksak worked at the family business which his grandfather had started with a portable saw mill. In 1978, they built a pallet shop, and around 1980 they built the saw mill.
Oleksak said the business picked up every paper mill in Westfield, making low grade lumber pallets, planks for building, sawdust and mulch. His sons Jeffrey and Brian Oleksak are the fifth generation working there.
The paper companies have all closed, and the business now concentrates on pallets. “Small family saw mills are dying. There used to be 100 in Massachusetts, now there are only five left,” Oleksak said. “I put everything I ever had into this business,” he added, including reinvesting his profits into the company. 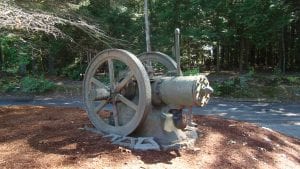 A diesel-converted steam engine found on the Western Avenue property gives a glimpse of the history of the land. (Photo by Amy Porter)

Now looking towards his retirement, he’s thinking ahead.
“Solar fields are extremely profitable for the city,” Oleksak said. He said he used to pay several hundred dollars in taxes for the farm land. Now, just to hook up, the city received $100,000. He said for cities with Municipal Light Plants, it’s even more profitable.

Stephen and his wife Susan are very involved in the community with the Boys & Girls Club, the YMCA and the Red Cross. A few years ago they received a Red Cross Community Spirit Award for fundraising. They also run the golf tournament for the Boys & Girls Club which takes place at both Tekoa and the Ranch Country Clubs, and netted a record $80,000 this year.
“She’s my motivator,” Oleksak said of Susan.
Oleksak says he has other forward-looking projects in mind for his property. Right now, he is looking for other solar arrays to mow with his new tractor.