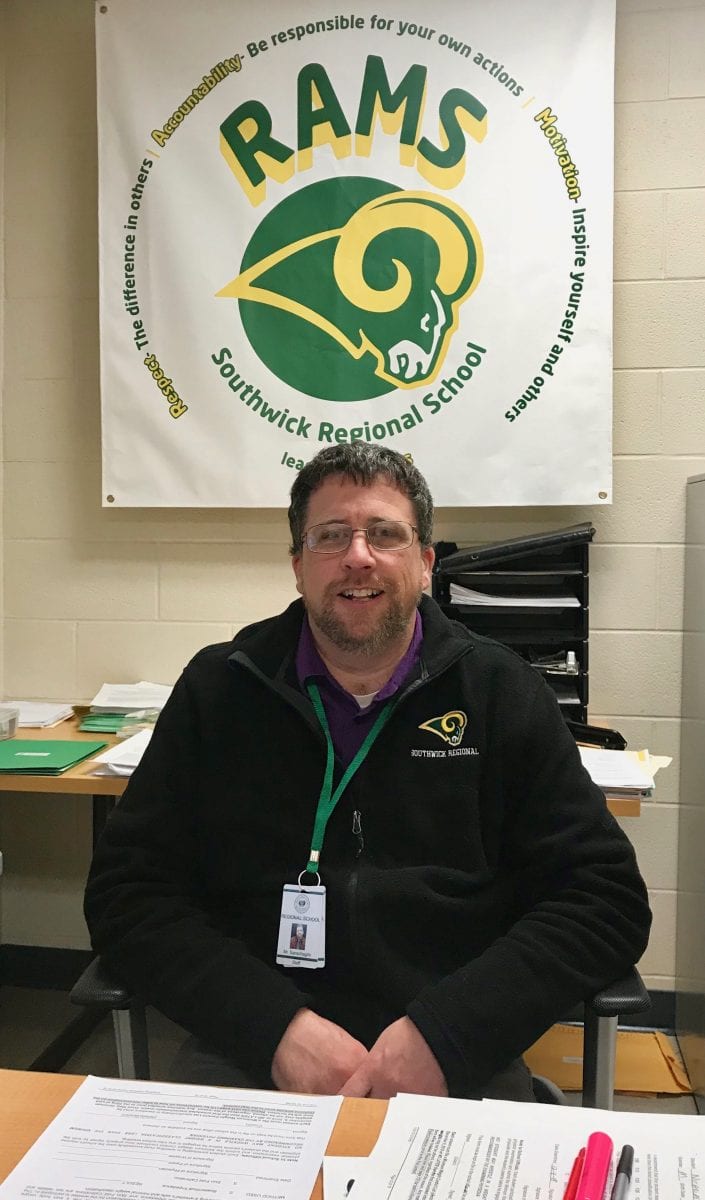 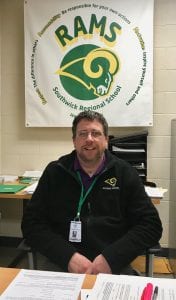 SOUTHWICK – If there is another cancellation of a high school sport season at Southwick-Tolland-Granville Regional School, it will not be for a lack of effort.
Southwick Athletic Director Dave Sanschagrin unveiled comprehensive plans of a proposed winter sports season for the Rams during the Dec. 1 School Committee meeting.
Sanschagrin opened the meeting by telling the School Board: “I know this decision is not going to be an easy one and is not going to be popularly received either way. There is no right or wrong answer here.”
The school’s athletic director detailed the school’s plans to play basketball and ice hockey in local “bubbles,” and participate in skiing at Berkshire East in Charlemont, adhering to Mass EEA guidance, MIAA issued sport specific guidelines, as well as those set forth by the PVIAC.
For basketball, players will be asked to arrive just 15 minutes before tip-off. Varsity and junior varsity teams will be separated, and involve different access points. There will also be a rotating practice schedule that only one team – boys or girls – are in the school building at one time. Locker rooms will be used only for bathroom use.
“We want to shrink the footprint of where our coaches and players will be,” Sanschagrin stated. “It will be the arrive-play-leave mentality.”
The AD said similar protocols will be in place at Amelia Park Ice Arena for hockey.
“We are very fortunate to be at Amelia Park,” Sanschagrin said. “It’s one of the better rinks, probably the best rink in Western Mass as far as sanitation and attention to detail, and just the quality of the facility itself. We are lucky to be playing out there.”
Hockey players will be expected to arrive dressed for the game, other than skates, helmets, and gloves.
Skiers will be required to use their team bus and respective tent on race days as the lodge at Berkshire East will remain closed this season.
“Skiing is pretty much straight forward being outside, similar to golf in the fall with limited modifications.”
Golf was the lone sport that the Southwick School Committee voted to allow to participate in PVIAC competition this past fall, sidelining soccer, field hockey, and girls volleyball teams due to coronavirus concerns. The decision drew the ire of parents, coaches, and players within the local community; and a protest of student-athletes was staged.
Sanschagrin cited studies and surveys that showed minimal contact and low numbers of COVID cases due to sports so far this year, noting that the spread of the coronavirus is primarily due to social behaviors outside of the field of play.
“The data available to us indicates that the guidance and protocols established by the various agencies when followed properly have proven to be sufficient to stop the spread of COVID-19 on the field during competition,” he said. “The issues have arisen when the failure to follow guidance has been an issue.”
If a student-athlete does not follow proper protocols at Southwick, he or she will be warned, and if the problem arises again, likely dismissed from the team. If a player begins to exhibit COVID-related symptoms during a practice or game, he or she will be isolated from other members of the team. If Southwick goes fully remote, sports at the school will be halted.
“My concern is really not with what happens when we are able to regulate and control what our students or our athletes do,” School Committee member Pam Petschke said, following the presentation. “My concern … are the behaviors that are much harder for us to control.”
Said fellow School Board member Chelsea Berry: “One big game-changer … is that in the fall, we were so low on the COVID map. We were the safe zone and everyone around us seemed to be unsafe at that point. Now we’re in the ‘red’ and the people around us are also in the ‘red’. I felt like we really needed to protect our community. At this point, we are in the danger zone but it felt like it was a game-changer to see those who go into the ‘red’ are not involved in sports. We wouldn’t be involved in competing as well so that danger of mixing with communities that are too dangerous is kind of removed.”
Another School Committee member offered his thoughts on the winter sports plan.
“I think for everybody for how things went the last time with short time frames and lack of information, I think we’ve got a much better sense this time of a full plan,” Jon Schantz said.
The School Board is expected to vote on the winter sports proposal Dec. 15. If approved, sports practices would begin after the holidays on Jan. 4 with games expected a week or two later.
The MIAA and PVIAC has approved a condensed seven-week season, ending Feb. 21.