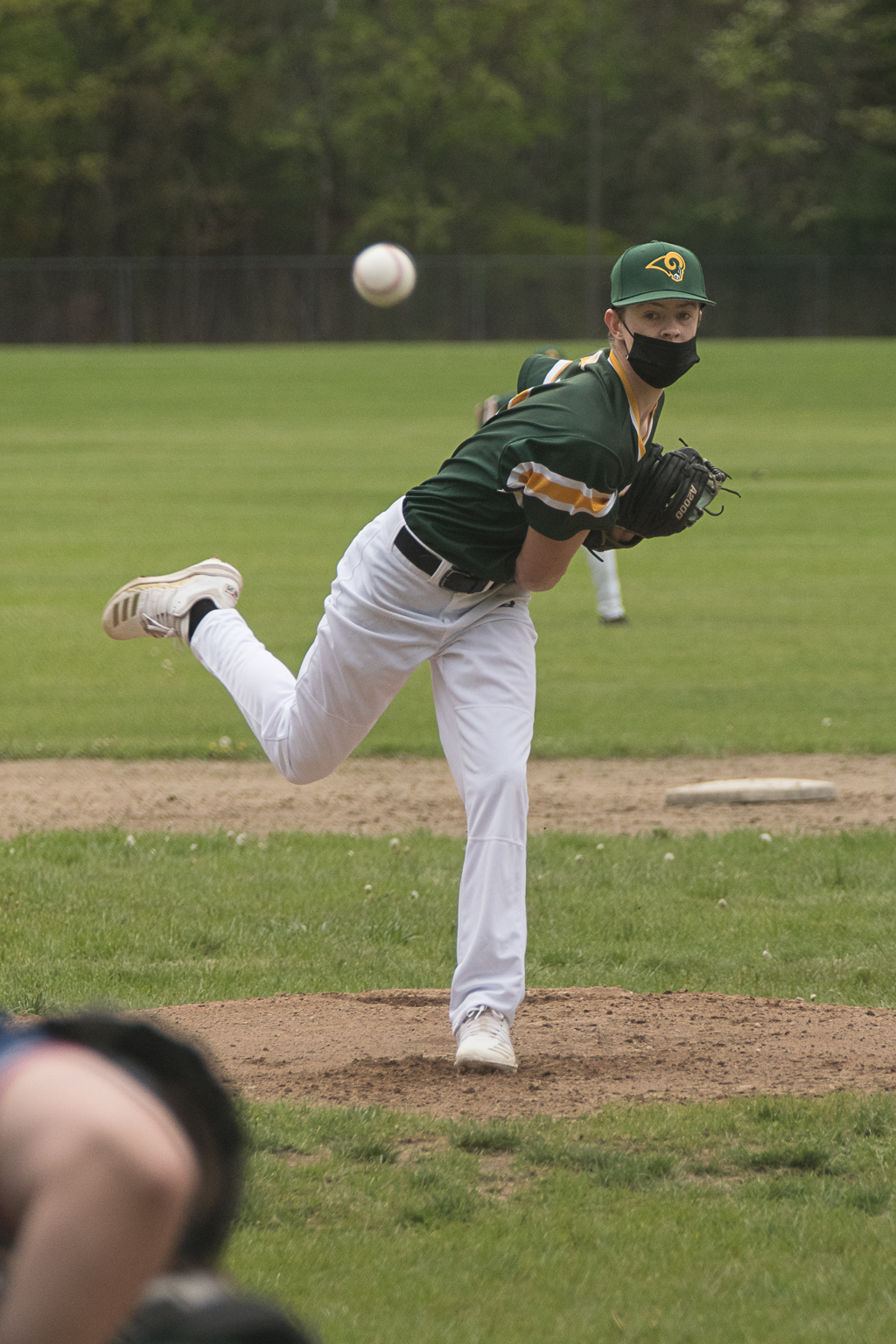 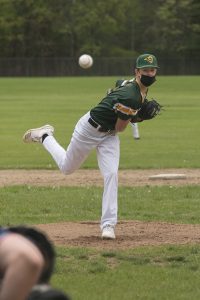 “You can’t ask for much more than what we did today,” Southwick baseball head coach Ben Bohlke said. “It’s been a long time for these guys. I’m happy that they got to be out here again. That’s the number one thing. It’s just great to see these guys out here having fun playing a baseball game, win or lose. …I’m happy we were able to get a win but I’m just happy we were able to play a full seven inning game.”
Southwick wasted no time in jumping out to the early lead.
In the first inning, Jacob Garrity led off with a double to left center field. No. 2 hitter Brennan Vinesett smacked a double through the left side. With one out, Leighton Billings walked. Nate Goodwin followed with a sac-fly RBI. An error on the relay throw, allowed a third run to score.
Southwick tacked on a run in the second. Ryder Pieczarka singled. Labrecque hit into a force out at second base, but stole second base, and came around to score on a Garrity RBI double to left center field.
Labrecque remained highly effective on the mound, issuing just a free pass to Gaven Connors in the second before inducing a 4-6-3 double play. He forced a fly out to end the inning.
Southwick increased its lead by six in the third. Jack Sebastyn began the inning with a hard hit ball to left center field that resulted in a two-bagger. Goodwin drew a one-out walk. A passed ball with two outs allowed both runners to move up on the bases. St. Mary’s pitcher Cam Cusak induced what appeared to be an inning-ending ground out, but an infield error allowed two runs to score. The Rams led 6-0.
Despite trailing by what amounted to two field goals, St. Mary’s continued to fight.
Cusak retired the side 1-2-3 in the fourth, forcing two flyouts and a ground out at third base for the inning’s second out. Saints third baseman Ty Leonard backhanded a tricky hard hit ball near the third base bag, spun, and fired a bullet to first base that resulted in an out.
St. Mary’s swung the momentum onto its side.
Trevor Corriveau broke up Lavrecque’s no-hit bid by leading off the fourth with a single through the left side, Everett Stec followed with a single through the right side, moving Corriveau to third. Stec stole second base. In the next at-bat, Brady Collins put the ball in play. An infield error gave St. Mary’s its first run of the game. With one out, Colin Freeman ripped a run-scoring single to right field. The Saints pulled to within 6-2.
Southwick recaptured one of those runs in the top of the fifth. Goodwin manufactured a run for the Rams, walking, stealing second base, and scoring on a Pieczarka base hit to center field.
Southwick broke open the game in the sixth inning with a four-run outburst. Garrity belted his third double of the game to make it 8-2. Sebastyn hit a sac-fly RBI. Nick Michael smashed a line drive to left field, scoring two more for an 11-2 lead.
In the seventh, Southwick scored on an error, a Goodwin RBI single, and a Michael RBI double. Garrity was robbed of another hit when Leonard, playing center field, made a diving catch for an out.
Southwick reliever Pieczarka closed out the final inning with three straight Ks.
“I think coming into the season a lot of people were underestimating us and I think we came out and made a big statement that we’re not a team to take lightly,” said Southwick third baseman Leighton Billings, who was expected to take the mound in the team’s second game of the season May 10 against Granby. “I think top to bottom everybody did their job, everybody helped out, and contributed. …It was a great win.”