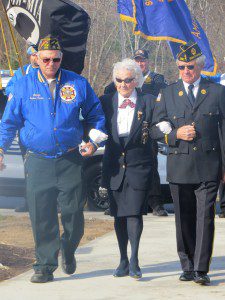 SOUTHWICK – The town honored its veterans Monday with a parade and ceremony at the renovated War Memorial.
The Memorial was updated to make it compliant with the Americans with Disabilities Act and now features a concrete walkway that extends from the sidewalk on College Highway all the way around the stone memorial and flag pole.
Marchers included members of the Veterans of Foreign Wars Post 872 and the American Legion Post 338, Board of Selectmen Russell Fox and Joseph Deedy, State Rep. Nicholas Boldyga, the Southwick-Tolland-Granville Regional High School marching band, and local boy and girl scouts.
Fox offered his appreciation to those who have served and recognized the hard work of Boldyga, former State Sen. Michael Knapik, and Town Hall staff to bring the memorial renovations to fruition. Fox also quoted President John F. Kennedy’s Veterans Day address in 1963.
U.S. Navy veteran Matt Egerton spoke about the appreciation veterans have for hose who remember them on Veterans Day, and recognized that this past weekend marked the anniversary of the U.S. Marine Corps.
“From a proud squid to all you jar heads, happy birthday!” he said.
Gold Star Mother Marie Alamed, who lost her son in the Vietnam War, was escorted by VFW Commander George Fedora and Legion Commander James Levy. She laid wreaths at the memorial as the Legion Riders saluted.
During the ceremony, Police Chief David Ricardi was presented with a $1,100 donation from the VFW to help fund the K9 unit.
“I want to thank the VFW fo what they’re doing – it makes a big difference for us,” Ricardi said of the annual spaghetti dinner-funded donation.
Southwick Congregational Church Pastor, Rev. Bart Cochran, offered the invocation and benediction for the ceremony.
In his address, Cochran spoke of veterans as “worthy men and women who gave their best when called upon” and noted the hrdship of those who serve and their families.
“We respect them. We thank them. We honor them. We are proud of them,” he said.