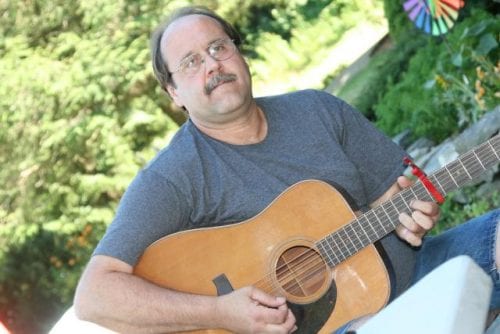 Jack Yourous of Southwick to play as ‘Jack and his Guitar’ in Huntington on Valentine’s Day weekend. (PHOTO SUBMITTED)

HUNTINGTON – A collaboration between the Council on Aging and the Huntington Community Events Committee is bringing live acoustic music to two local restaurants on Valentine’s Day weekend.

Yourous started performing acoustic sets as Jack and his Guitar in 1992, after previously playing in heavy metal bands around the area. “Hanging around, I started plunking around on acoustic and started really liking it,” he said.

A carpenter by trade, Yourous normally plays monthly at the Yarde Tavern in South Hadley and Pic’s Pub in Holyoke, and has regular sets at the Crestview Country Club in Agawam, among others. He has also performed at the Huntington Summer Music Series on the Green a few times, which is how he was contacted for these performances.

Yourous said he was playing every weekend and during the week before COVID. This past year, however, has been very hard on both of his trades. “This is the first thing I’ve done in awhile,” Yourous said. “I’m a carpenter too, and I haven’t done much with that either, because you can’t go into people’s houses. That was my main income, but now it’s split down the middle with music.”

Reservations are highly recommended due to limited seating. Those who call and make reservations will be entered to win a “sweetheart basket” of wine, chocolates and a gift certificate.