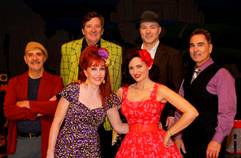 Eight to the Bar will play a free concert in Stanley Park on Aug. 15. (submitted photo)

Listening to “Eight to the Bar” is a lot like driving along a time-warped highway precisely halfway between Count Basie’s Kansas City and Fats Waller’s Harlem, where the car radio picks up everything from “Jumpin’ at the Woodside” to the Andrews Sisters. Their material, like their outlandish wardrobes and onstage choreography, is a colorful mix of forties jazz and swing, fifties jump blues, and some of their own swing-influenced tunes. With their female and male vocals, saxophone (their sax player, Collin Tilton, is Van Morrison’s original sax and flute player who played on Morrison’s quadruple-platinum-selling “Moondance” album), guitar, bass, keyboards and drums, this unique sextet packs a musical and visual wallop not seen in New England since the group’s inception in 1975.

Since that time they have released 12 CDs and have excited audiences from Europe to the Caribbean. The band has been named “Best All Around Band” by the CT Now Readers’ Poll 2018 and recently had the honor of touring the Republic of Georgia (near Russia) at the invitation of the U.S. Embassy there. The group is working on its 13th CD.

This performance begins at 6 p.m. at the Beveridge Pavilion and is free of charge. Chairs will be provided and a food service will be available.

For more information on the Westfield Bank Sunday Night Concert, visit www.stanleypark.org or call the park office at 413-568-9312.