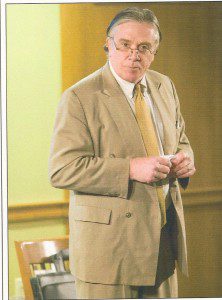 To commemorate Father’s Day and the 50th anniversary of the Harper Lee classic “To Kill A Mockingbird,” Southwick-On-Stage presents Richard Clark at Town Hall this weekend.
Clark will portray Lee’s Atticus Finch in a one-man show at 7 p.m. Friday and 2 p.m. Saturday. Tickets are $12 at the door and $10 in advance at Farm Family Insurance Diane Mason Agency at 504 College Highway.
Joan Perkins-Smith of Southwick-On-Stage said the show is a great way to celebrate Father’s Day.
“Atticus Finch is a single father of two young children and Richard Clark brings the character to life,” said Perkins-Smith.
Finch is a lawyer and resident of the fictional Maycomb County, Alabama, and the father of Jeremy Atticus “Jem” Finch and Jean Louise “Scout” Finch. In an interview once held with Harper Lee, she indicated that she had based Atticus’s character after her close friend Nick Velillari, who was also a lawyer. In the 1962 film adaptation of the novel, Gregory Peck received an Academy Award for his portrayal of Atticus Finch. In 2003, Finch as depicted in the film was voted by the American Film Institute to be the greatest hero in American film
Clark’s “Atticus” is part of a series of one-man shows the Boylston resident performs throughout New England.
“He is probably best known for his Mark Twain,” said Perkins-Smith.
Clark is an actor with over 30 years of experience in New England regional theater, New York Theater and television. He is a graduate of Clark University and studied at the American Academy of Dramatic Art, The Actor’s Connection, and the Actor’s Loft in New York City. His “Keeping History Alive” series brings historical figures such as Mark Twain, Andrew Carnegie, Clarence Darrow, John Barrymore, Ernest Hemingway and William Shakespeare back to life. His shows are based on biographies, autobiographies personal letters, books and the works of various playwrights.
Southwick-On-Stage could not perform a spring show this year and Perkins-Smith said the group used funds normally spent on its own production to bring Clark to Southwick. Southwick-On-Stage is still serving as the crew for the show, with sets designed by Jennifer Kowalski, a theater arts graduate of Westfield State University.
“We held a stage crew workshop in May and trained six new members on set design and building, lighting, backstage and technical work,” said Perkins-Smith. “Our usual house crew will be manning the house this weekend with help from the new members.”
Looking ahead, Southwick-On-Stage has applied for the rights to produce Agatha Christie’s “The Mouse Trap” this fall.
“We are hiring a director who will then set the production dates, auditions and rehearsals,” said Perkins-Smith. “That is a great show – it’s still running in London.”
For more information on Southwick-On-Stage or the Richard Clark show “Atticus,” visit Southwick-On-Stage.org.