SOUTHWICK – As tensions between police and citizens continue to divide communities across the country, Southwick is an example of how residents and police can work together.

Police Chief Kevin A. Bishop said he and his senior officers have spent the past several years focusing on building trust between police and residents. With just 13 complaints filed against Southwick officers since 2008 – none for excessive use of force which is plaguing so many cities right now – their efforts appear to be working. 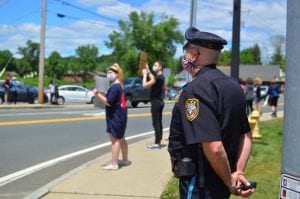 Southwick Police Chief Kevin Bishop looks on as Southwick students host a peaceful protest denouncing police brutality May 31, 2020. Bishop said the protesters had his respect, and that he was there only to protect them from being harassed. (PETER CURRIER PHOTO)

“We have a very good relationship with our community,” Bishop said with pride. “And there are some people who don’t agree with some police and may judge us on the actions of officers in other cities, but we treat our citizens fairly.”

Southwick Police are participating in a national police data collection project by a Chicago university. While researching answers to the questions presented, Bishop said they found the 13 complaints over the past 12 years and added that no police firearm had been fired in any response situation and that tasers were deployed eight times during that same 12-year period.

Bishop agreed there are “bad” police officers that should be reported and disciplined.

“There are some officers who should not have a badge,” he said, noting Southwick’s officers are held to a high standard.

Last week the Southwick Select Board approved an amendment to the Southwick Police policy that solidifies what Bishop said was already in practice but is now a general order regarding “Duty to Intervene.”

Bishop said when an officer takes the oath, upholding the law when it comes to fellow law enforcement personnel is mandated. Now, it is clearly written in Southwick’s policies with particular attention to use of force. 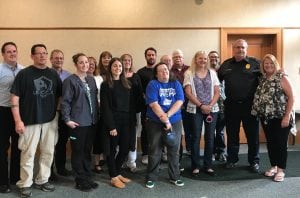 Participants of the 23rd Southwick Citizens Police Academy pose for a photo prior to their graduation in 2018. (THE WESTFIELD NEWS PHOTO)

The order states that “All officers of the Southwick Police Department should be aware of their personal responsibility during a use of force encounter. Officers shall have an affirmative duty to intervene should they observe a situation in which they perceive more than necessary use of force is being deployed by a fellow officer.”

Bishop said use of force violations have not been a concern for the department, but in light of national concerns, he and Lt. Robert Landis wanted it clearly written that officers must not only report when they see a fellow officer using unnecessary force, but must take action and intervene.

Bishop said Southwick officers are well trained and continuously educate themselves and the public.

“Education is important, and we want to educate the community on what we can and can’t do,” Bishop said.

According to Bishop, being involved in the community is what has built the relationship between police and residents. From hosting the Citizens Police Academy to leading the Southwick Regioinal School’s last day of school parade, officers are part of the fabric of Southwick.

“We are out in the community, attending events, going to schools – our officers are available and accessible to the public,” he said.

Living in and around the community is also one of the keys to Southwick’s good police relations.

“I am stopped by residents everywhere,” he said. “I talk to people at the grocery store, when out to eat . . . I live here and this is my community, too. This is my home. I have been here my whole life and at the end of the day, I don’t leave to go to another community.”

Bishop welcomes calls and emails from citizens and said he is happy to discuss any concerns or just get to know residents better.