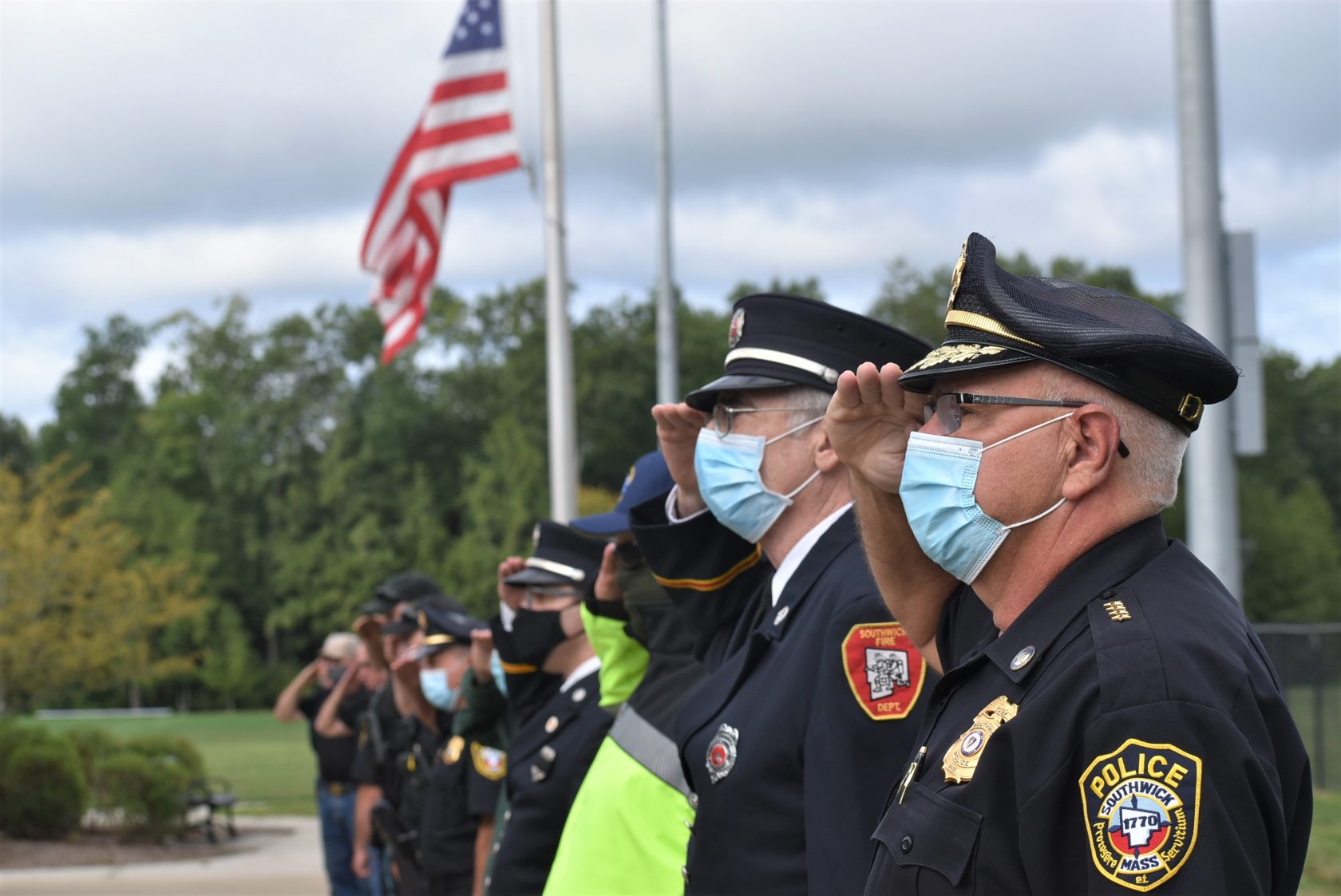 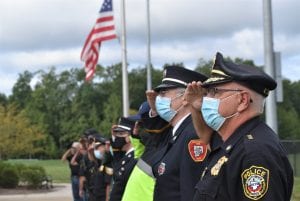 Members of the Southwick Police and Fire departments salute as the American flag is lowered and raised at Whalley Park during a 9/11 Remembrance ceremony on Sept. 11, 2020. (HOPE E. TREMBLAY/THE WESTFIELD NEWS)

SOUTHWICK – The impact of the Sept. 11, 2001 terrorist attacks is still felt today.

“What a contract of actions throughout the county today,” Anderson said while speaking during the town’s annual 9/11 Remembrance ceremony.

The event, which included the lowering and raising of the American flag, tolling the bell and reading of the Firefighter’s Prayer, was hosted at Whalley Park Friday.

Anderson said everything was affected when the first of the Twin Towers was struck that day.

“The economic impact was staggering,” he said. “If you remember, the stock exchange was evacuated during the attacks. New York City’s economy alone lost 143,000 jobs a month and $2.8 billion in wages in the first three months [following the attacks].”

“Cases of post-traumatic stress are common today among the 9/11 survivors and rescue workers,” he said. “Respiratory problems like asthma and lung inflammation also developed at abnormal rates for those in and around the World Trade Center during and after the attacks. Over 10,000 cases of cancer [are] attributed to the attacks.”

Anderson said “history has shown attacks against our freedom comes  in many forms – be it foreign interference or domestic issues. Our freedom is something to be cherished. The term ‘We must not forget’ goes hand-in hand as we remember 9/11.”

Police Chief Kevin A. Bishop noted that this was his third and final 9/11 ceremony where he would be speaking as chief because he is set to retire soon. He thanked Anderson for always including the police in the event and asked for prayers.

“I ask each of you to continue to pray for the families that lost loved ones and to never forget the ultimate sacrifice so many made that day,” Bishop said. “I am also going to ask this year that you pray and support our law enforcement officers across this country. I ask for these prayers for officers who, in the face of the uncertainty of their future, still show up every day and continue to serve and protect with pride and honor.”

Southwick Fire Chaplain Dan Valeri of Living Hope Church offered a prayer and reflected on the events of that fateful day.

“We are gathered here for this 9/11 memorial service to remember those brave firefighters, policemen and EMTs that gave their lives helping others in the aftermath of the terrorist attacks on the world trade centers and the Pentagon,” he said. “Back then we made a promise, that we would never forget, and we would always remember the events of that day and the sacrifice of those brave men and women.”

Valeri said that the sons and daughters of the firefighters who went to bed without a father following 9/11 are now old enough to have children of their own.

“Next year will mark 20 years since the events of 9/11. The further we get away from the events of that day the further away it appears in the rear-view mirrors of our memory,” he said. “That is why it is important that we tell their story and communicate the things they stood for: vigilance, readiness, sacrifice and selflessness, so the generation to come and all those that will follow will never forget.”