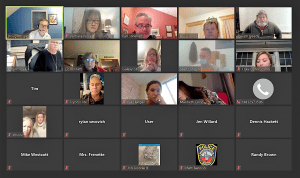 The Southwick Select Board met via Zoom Jan. 25 and hosted a dangerous dog hearing. (SCREENSHOT)

SOUTHWICK – The Southwick Select Board will decide the fate of Theo and Marley, German shepherds who were the subjects of a dangerous dog hearing this week.

The dogs are owned by Sean and Jennifer Langan and are accused of attacking neighbor Erika Emmelmann’s Labrador mix named Trixie and her dog walker.

Animal Control Officer Liz Bennett said the dogs, Theo in particular, have had several incidents involving Trixie. A Nov. 17, 2020 incident was the cause for the hearing and was the first time Emmelmann filed a report, despite previous run-ins with Theo. She said she did not report the other incidents because she is friends with the Langans, her neighbors.

“I love the Langans,” she said during the hearing Jan. 25. “This isn’t a hearing to put down Theo, it’s to get them to do something.”

Bennett read her report of the November incident and said she responded to a complaint that two dogs attacked Trixie and her dog walker, injuring the woman’s hand and biting Trixie on the stomach.

Bennett said because there were previous problems between the dogs, Emmelmann and the Langans had a texting system when the dog walker was there to take Trixie out. She would text Jennifer Langan that she was about to take Trixie out so that Theo and Marley could be kept inside their home. That day, Bennett said, there was no response to the text and the dog walker brought Trixie out and the dogs came out of the house and attacked them.

Jennifer Langan later testified that she was in the barn and did not see the text and that it was only Theo that got out. She said the dog walker made the situation worse by screaming at her and Theo, making it difficult for her to call Theo back with all the noise.

Bennett reported that Theo and Marley were not current with vaccinations at the time. She said she met with the Langans and discussed the vaccination and noted that Theo appeared sick and had a “snotty nose” and told Sean Langan to bring him to a vet right away. Bennett said on a return visit, Theo had not been vaccinated or seen by a veterinarian.

Sean Langan explained that he brought the dog to a vaccine clinic at a local business but the veterinarian did not show up for the appointment. He said he did bring Theo to a vet who said he was not sick. He added during the hearing that his family contracted COVID around that time and had to quarantine, making it difficult to handle arrangements for Theo.

“Since then, we have been putting him on a leash every time he is outside,” Langan said, noting he felt his family was portrayed to be neglecting the situation by Bennett, and that was not the case.

Several residents spoke on behalf of the Langans, as well as Theo and Marley. No one who spoke supported any claims that either dog was aggressive, and all the speakers said they had only good experiences with both dogs.

Select Board Chair Douglas Moglin said dog hearings were something he dreaded.

“As a selectman, it’s my least favorite thing,” he said.

Moglin and Selectman Joseph Deedy both said that while they sympathized with the Langans, they wanted Emmelmann to feel safe when she walks her dog in her own neighborhood.

“The day I have to text a neighbor to walk my own dog, I’m done,” said Deedy.

The Langans said there were numerous discrepancies in the report, however, Moglin said the details did not matter.

“Regardless of the details of the report, there’s no denying that Theo left the property on at least one occasion,” Moglin said, noting that no one denied that Theo injured the dog walker and Trixie. He also said it seems that Theo, for some reason, has a problem with Trixie.

The board agreed Emmelmann’s dog should be able to be walked without incident.

“I just want Erika to be comfortable,” Deedy said.

Bennett said Emmelmann had offered to pay to have the Langans dogs trained by her dog trainer, but they refused. When asked what outcome Emmelmann hoped for, she said she wanted them to completely fence their yard.

Moglin said Theo was not to blame.

“In every instance, it’s not the dog’s fault, it’s the owners’ fault,” he said.

Board members agreed they were not interested in a death sentence and they would render a finding at a future meeting.