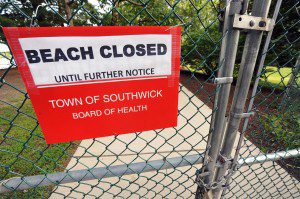 SOUTHWICK – The Town Beach is closed until further notice due to unusually high bacteria in the water.
Health Inspector Thomas Fitzgerald said yesterday that a test of the water on Monday found Escherichia coli, commonly known as E. coli, bacteria in the beach water.
The water is tested regularly and Fitzgerald said the water’s normal E. coli measures in at six organisms per 1,000 milliliters. Monday’s test found 400 organisms per 1,000 milliliters.
“It’s a spike,” said Fitzgerald. “We had very good water quality before this spike so my judgment is it’s due to the heavy rain from the thunderstorm over the weekend.”
The Environmental Protection Agency recommends 235 organisms per milliliter is safe for swimming.
Fitzgerald said a sample of water was taken again yesterday and he should have the results in 24 hours.
“I’m pretty confident the beach will be open for the weekend,” he said.
Fitzgerald said in the past, spikes were caused by geese on the beach.
“I did not see any geese on the beach and believe it was from the rain,” he said.
A call was sent to all residents signed up for the town-wide emergency alert system, and another will be sent when it is safe to open the beach. Fitzgerald said only the water at the beach is tested.
“We don’t test anywhere else on the lakes – people have to use their own judgment,” he said.