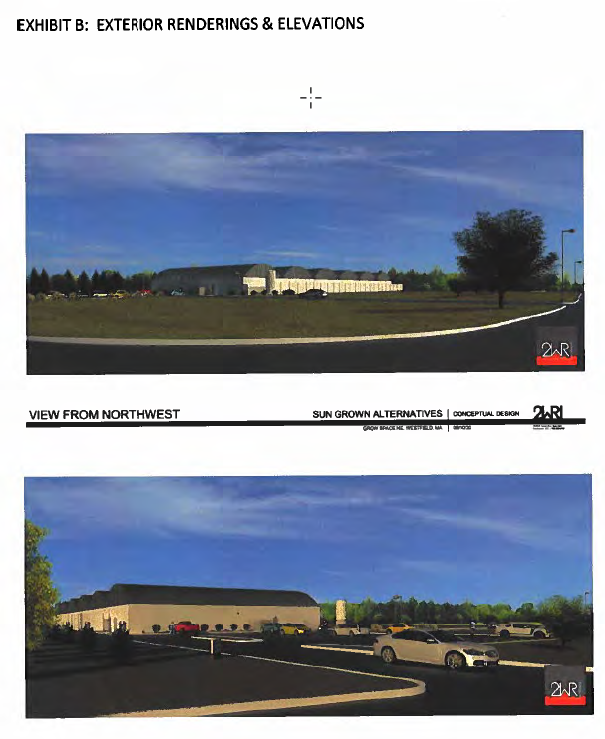 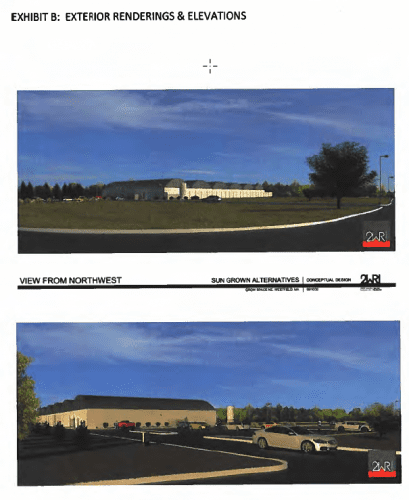 WESTFIELD – The Planning Board on Sept. 15 granted a special permit, site plan and stormwater management permit for New England Technologies, LLC to build a 33,000 square-foot greenhouse for marijuana cultivation at 0 Progress Ave. and Falcon Drive.

The public hearing had been continued from Aug. 18, but the application had been amended to remove the retail portion of the proposal from the project, as the applicant was not granted one of the two remaining marijuana retail licenses in Westfield.

Robert Wolf and Kaily Hepburn of New England Agriculture Technologies said they wanted to move forward with the greenhouse only, which had been their original intent before the possibility of a retail license had been presented to them.

“Our original intent was to put the greenhouse there; the retail was an opportunity with the city to receive a license,” Wolf said at the August meeting.

Hepburn said the $5 million greenhouse project is on four acres zoned Industrial A, and will produce 2,800 pounds of product per year. Hepburn said they use renewable sustainable emergency technologies wherever possible in terms of water and power. She said in addition to projected property taxes of $183,000 and a community impact fee, the company will contribute $10,000 annually for a non-profit community project that the city would like funded.

According to the presentation, the greenhouses built by ArchSolar of Maine are self contained, solid with sealed units. The buildings have clear roof material looking down to allow sunlight for the growing facility. On the north side of the series the building has a solid section roof for administration, offices and packaging of the product.

The HVAC units are on the outside of the building to draw air from the inside, recycle it, control humidity and temperature and push it back in, for a constant recirculation of the air in the building without allowing any air or odor to escape outside. A sound wall will be built in front of the units to mitigate noise levels. A C02 tank will also be on the outside of the building, which the team said would not represent any hazard to the environment and is common for agriculture operations.

Planning Board Chair William Carellas asked for a rundown on water usage and disposal because the property is on the aquifer.

Wolf said one of the things they focus on in terms of all of their facilities is to make sure they are compliant to future regulations. He said according to Massachusetts law, even though they don’t use pesticides, they can’t allow any water that might be on a plant to escape the building. He said they recycle the water or capture it, adding that at 233 gallons per day per 100 square-feet, they recycle 70% of the water, using about 1.9 gallons a minute for the entire facility.

“None of it escapes the building,” he said, adding that any water captured off plants go to a tight tank, which will collect about 54 gallons a day for processing on a weekly basis or monthly basis. “We’re creating a safe environment on all our sites. Many cultivation facilities being built in this state are in violation of that. We’re building that into our entire operation. To answer your question, we don’t use a lot of water, and none of it escapes the building,” Wolf said.

Hepburn added that the state prohibits use of any pesticide, insecticide or fungicide, allowing only garlic oil, peppermint oil, or white paper. She said all products that come out are put through rigorous testing, plus the Center for Disease Control does random tests. “Several facilities have been caught using pesticides in that way,” she said.

Security, HVAC maintenance, lighting and landscaping was also discussed in detail. Hepburn said there would be 18 full time employees for the greenhouse.

City Planner Jay Vinskey said he thought 57 parking places for the greenhouse for 18 employees, which had been reduced from the previous greenhouse/retail proposal, was still excessive, adding that on the aquifer, the city looks to minimize impervious surfaces. After a discussion, the company agreed to remove 20 parking spaces. A curb cut on both Progress Avenue and Fowler Drive will be maintained for access to the property.

With no public input, the public hearing was closed, and the special permit and site plan were approved with several conditions, among them reduction of parking spaces and no discernable smells beyond 500 feet.