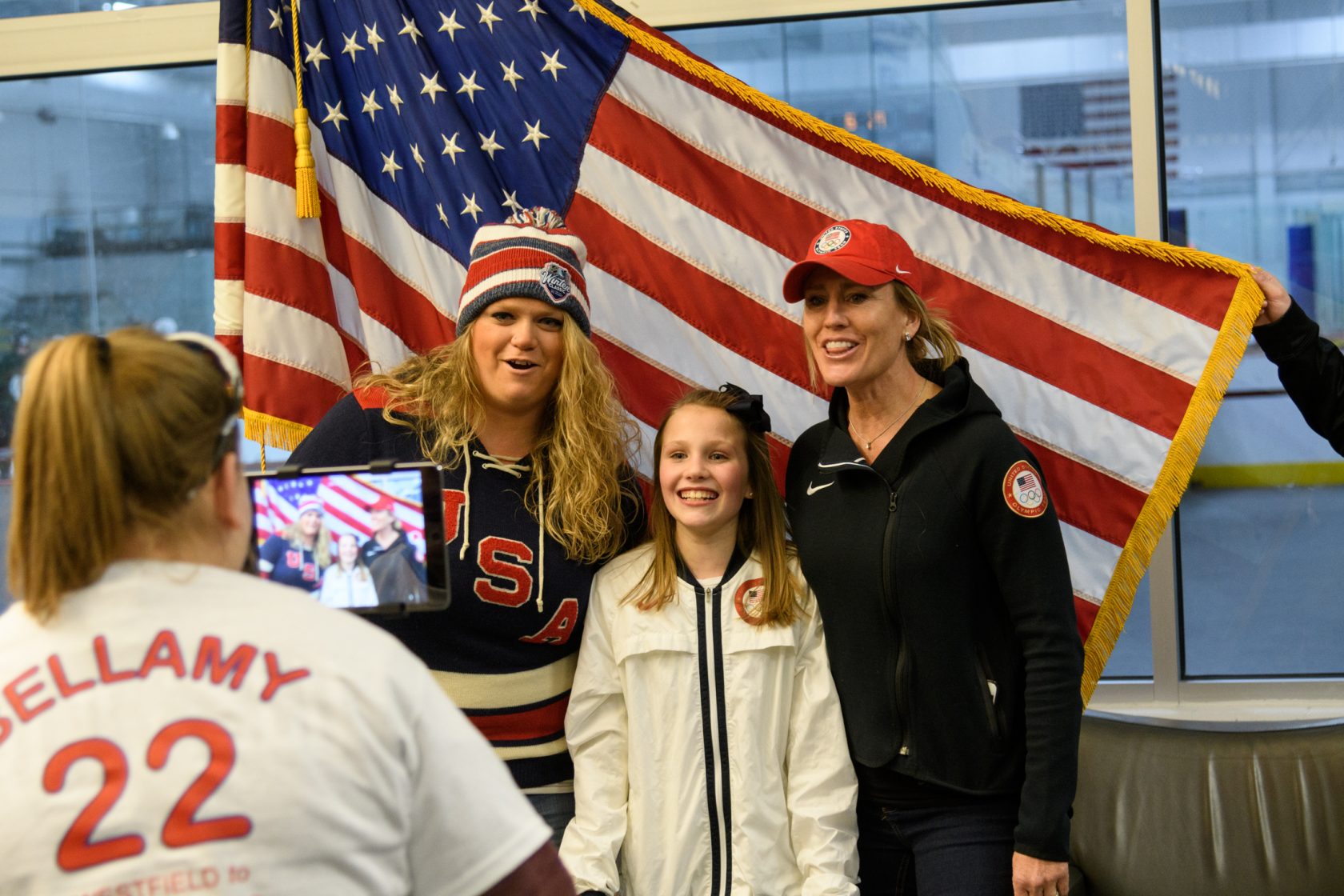 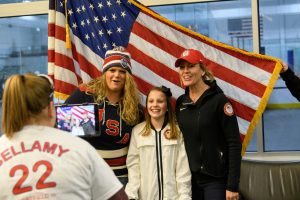 WESTFIELD – Although the “Big Game” ended in disappointment and heartbreak for New England Patriots fans last Sunday, something even more super took place locally bringing smiles to the Whip City faithful.
On Thursday, local fans of girls ice hockey, and more specifically, legendary three-time Olympian Kacey Bellamy gathered at Ameila Park Ice Arena to show their support of Team USA and females in the sport of hockey.
Fans were treated to a pre-recorded video message from Bellamy thanking all her supporters as the United States attempts to bring home the gold medal in women’s ice hockey from the Winter Olympics in Pyeongchang, South Korea.
Westfield Mayor Brian P. Sullivan addressed the sparse crowd, reading a letter from United States Vice President Mike Pence celebrating Bellamy’s chase for gold and her hometown supporters. Shea Braceland, 11, sang a rousing rendition of the Star-Spangled Banner.
“I think it’s amazing everyone coming together as a community,” said Kacey’s sister, Lindsey. “This year is definitely a special year. This is a big deal. They say the third time is a charm. My only wish is that they get a gold medal.” 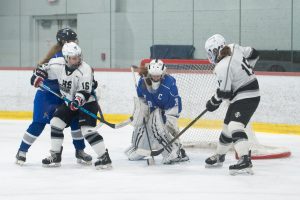 Longmeadow’s Jordan Kowalski (Westfield) tries to bat the puck in on a rebound while Skyler McComas holds off the Auburn defender Thursday night at Amelia Park Ice Arena. (Photo by Bill Deren)

After the emotional pre-game ceremony, the Longmeadow High School girls varsity ice hockey team, which also features three varsity players from Westfield High through the two schools’ co-op program, took the ice against the Auburn Bobcats.
Less than 30 seconds into the contest, Longmeadow’s Brigitte Goeler-Slough skated into the crease untouched, and flicked the puck into the open side of the net for a 1-0 lead. Lancers’ sensational sophomore Jordan Kowalski (Westfield) and Skyler McComas set up the play.
Playing inspired hockey, Longmeadow tacked on two more first period goals, scoring two goals in the final 4:13 of the period.
Kowalski scored the team’s second goal. As if shot out of a cannon, the Longmeadow sophomore melted the ice, quickly skating ahead and scoring on a breakaway. Teahgan Hall made it 3-0 with 61 ticks left in the opening period.
Longmeadow padded its lead with two more goals in the second period, and one in the third to cap off a 6-0 shutout. 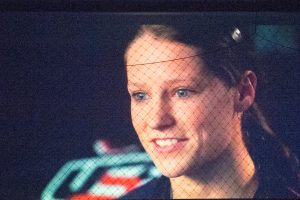 Goeler-Slough finished with two goals, Karalyn Jones, and Katelyn Joyal each also had one. Joyal also had an assist.
Longmeadow goalies Kayla Brown (10 saves) and McKenzie Rae (4) earned a combined shutout.
There were other activities ongoing at Amelia Park Thursday night, including handouts of free T-shirts and US flags. A display was also set up to showcase the achievements of Katie Guay, a Westfield native who is serving as a referee at the Winter Olympics.
“This is so impressive with the community coming out for one of its own,” Mayor Sullivan said. “It all started with Kacey and her enthusiasm as a little girl playing hockey. Then there was a small team. Now there is a full-fledged league (of high school girls hockey players).
Said Westfield athletic director Eileen Flaherty: “It was fantastic that the City of Westfield would do this in Kacey’s honor to represent the country … and pair this up with Longmeadow girls ice hockey.”

BOYS BASKETBALL
Tigers shine on senior night
Westfield Technical Academy 58, Franklin Tech 40
Captains Andrew Czeremcha, Mark Klyuchits and Tyler Starzyk combined for 25 points as Westfield Tech charged past Franklin Tech in front of a packed house on “Senior Night.”
“We were able to score from three, in the paint and from the line once again,” said a jubilant Westfield Tech head coach Kyle Dulude, following Thursday night’s rout.
Westfield Tech’s Dave Tikhoncuk (15 points) produced highlight reel plays, and managed a few moves with the ball to help break the press. Brothers Kevin and Kenny Flores were scrappy all night while senior Ruvim Suprunchuk reeled off three straight baskets before the half for the Tigers. Cody Garwacki grabbed 10 rebounds.
“I’m so pleased with their efforts tonight,” coach Dulude said. “It is so rewarding to see the smiles on their faces and the positive energy that was brought to this building versus a very solid team.”

Butler closes in on milestone
Duggan Academy 69, St. Mary’s 33
St. Mary’s Jake Butler scored 10 points and continues to close in on joining a select club. Butler needs just 48 points to reach 1,000 career points for the school.
The Saints next travel to Pathfinder to take on the Pioneers Monday at 7 p.m., before returning home to take on Gateway Wednesday night at 6:30.