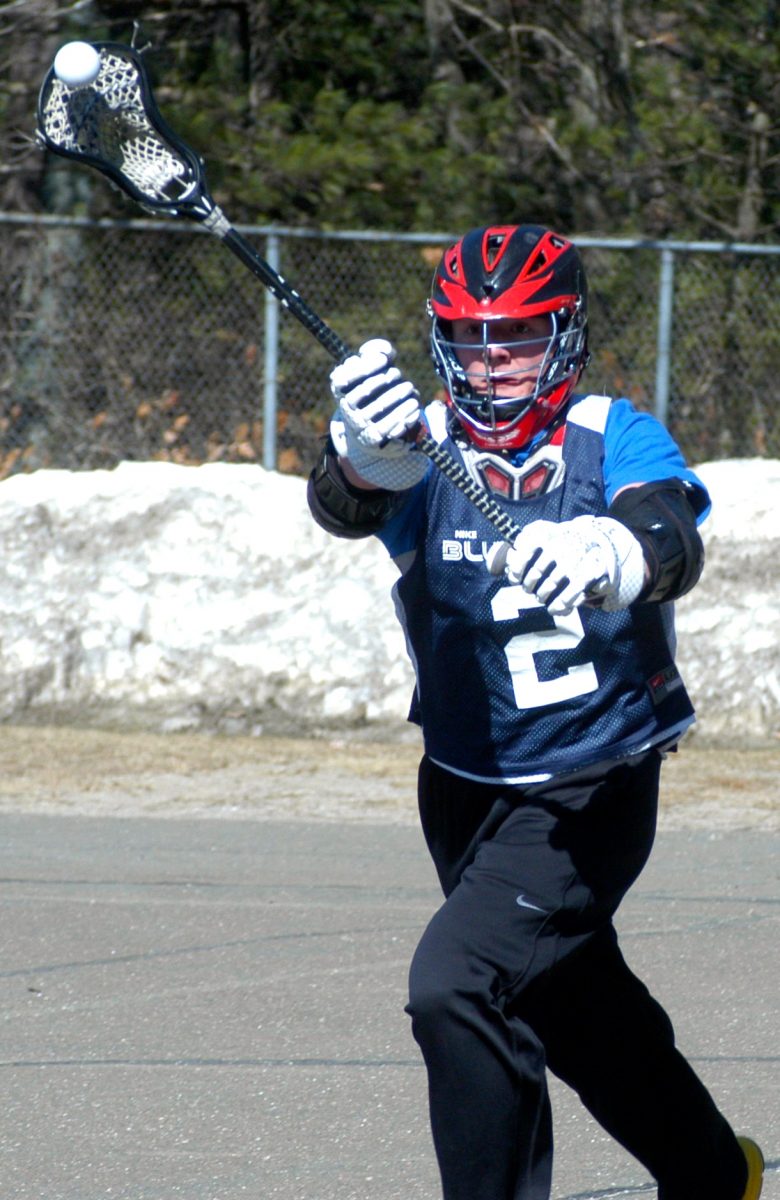 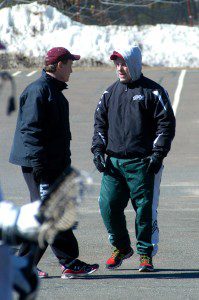 The WHS boys’ lacrosse coaching staff has a discussion during practice outside the Bombers’ gymnasium Monday. (Photo by Chris Putz)

WESTFIELD – The beginning of the spring season for several local high school teams is in major doubt, according to local officials.
“I hate to say it, but the spring season is in limbo,” Westfield and Westfield Vocational-Technical high schools athletic director Karen Gomez said Monday. “This is my worst winter or spring opening as AD.”
Teams were expected to take local ball fields over the course of the next week or so, but that is very unlikely now with a late thaw anticipated.
On Friday, the Pioneer Valley Interscholastic Athletic Conference voted to move games the week of April 6 to the second week of April, and take the second week of games and move them to the end of the season. Gomez said Westfield High sports will not follow that suggestion.
“I don’t want to put our teams in jeopardy of not playing those games late in the school year if we have a rainy season,” Gomez said. “I’d rather move games around here and there.”
Gomez said Westfield will attempt to play its postponed games on “off” days scheduled during the course of the season.
“If we can get on a field, we’re going to try and get on a field,” she said. “It feels like we’re going to play our spring season in four to five weeks.”
Gomez will reevaluate the state of the fields again April 1, and still seek an official starting state for spring sports April 6 if at all possible.
One team which will not be affected by the poor field conditions – Westfield High School boys’ volleyball.
The Westfield boys’ volleyball season will open its season March 30 against visiting Putnam at 5:15 p.m. The Bombers’ boys’ lacrosse team, who spent the early part of this week practicing outside among huge snow banks, will also open its regular season March 31 at West Springfield at 7 p.m., barring any further wintry weather.
Other schools such as Southwick-Tolland-Granville and Gateway Regional high schools are also in the process of rescheduling games originally set for early April. Athletic officials at St. Mary were unavailable Tuesday.
“We are in the process of moving games,” Southwick AD Frank Montagna said. “Baseball and softball (are) most likely being rescheduled. I’m not sure about track yet but that is looking more like we can’t play April 2.”