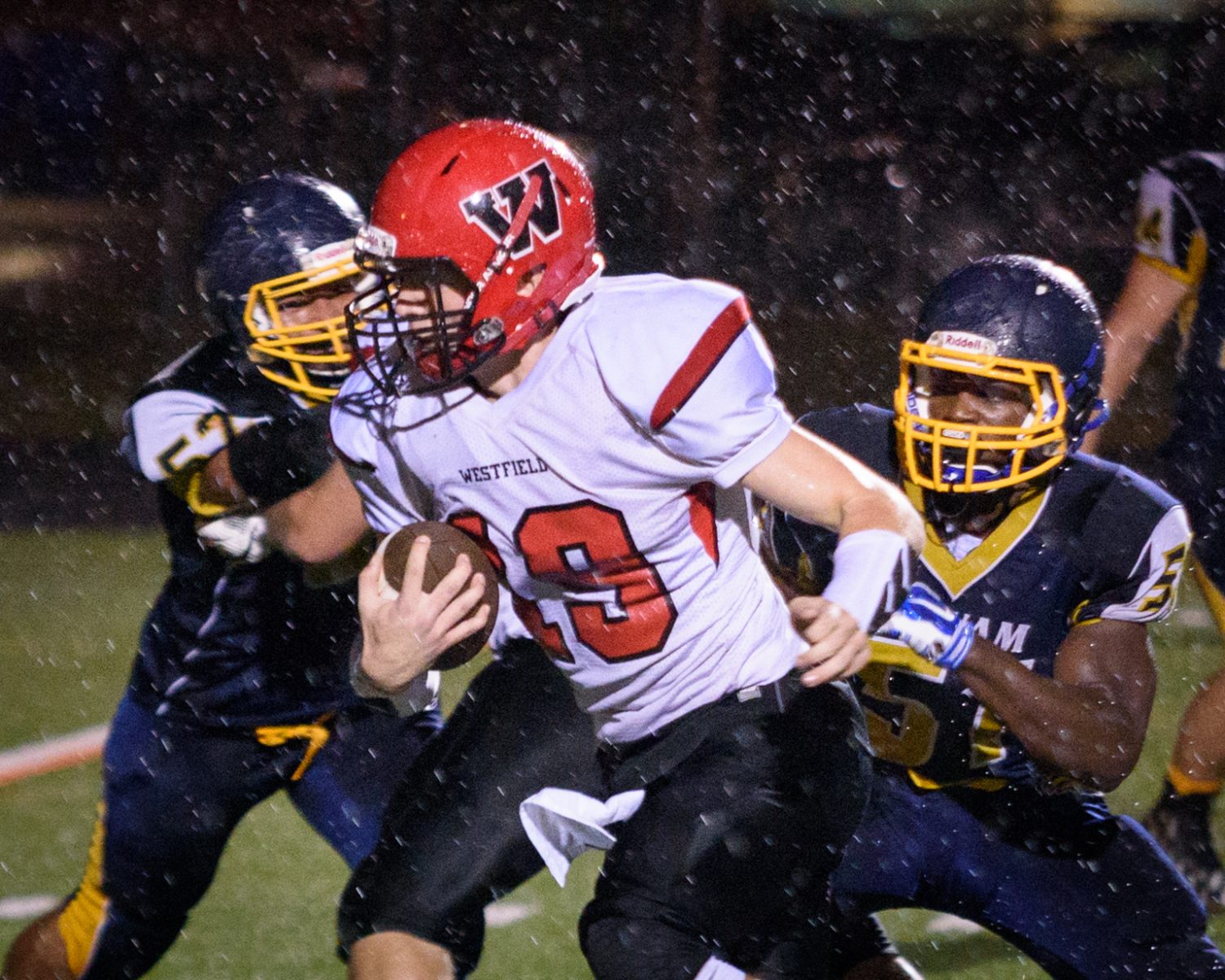 SPRINGFIELD – The playoffs are quickly coming into focus for the Westfield High School football team.
Westfield senior quarterback Austin St. Pierre threw three touchdowns – two to sophomore wide receiver Bailey Collier – and rushed for another as the Bombers upended the Putnam Beavers 36-8 Friday night at Central High School’s Berte Field.
Westfield has one more hurdle remaining on its regular season schedule, a senior night showdown against the East Longmeadow Spartans Fri., Oct. 28 at Bullens Field. Kickoff is at 7 p.m.
Putnam came out rolling with the ground game in a driving rain storm. The Beavers marched the ball 55 yards on their first possession, only to be stopped on the four-yard line after a failed fourth-and-4.
Westfield was stopped on its initial drive of the game. The Bombers were forced to punt from their own 11-yard line, but recovered a fumbled punt return near midfield. 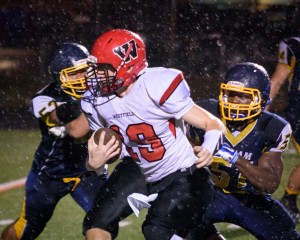 Westfield needed just four plays to score as senior running back Wilton Royal danced his way through the defense for a six-yard touchdown with 5:12 remaining in the opening quarter. The key play on the drive was a 37-yard pass from senior quarterback Austin St. Pierre to senior wide receiver Zach Adam to set up the scoring play.
On Westfield’s next possession, the St. Pierre-Adam connection worked again as the senior wide out took a pass on a bubble screen and ran 90 yards down the left sideline for another touchdown, and a 12-0 lead. St. Pierre’s 2-point run made it 14-0.
Putnam responded.
After opening up its third drive – this time from the 45-yard line – Putnam drove 55 yards and scored on an 11-yard TD run from senior running back Calvin James 53 seconds into the second quarter. The key plays on the drive included a 45-yard pass from senior quarterback Phillip Rankin to James in which James stretched out to make a beautiful diving catch, and a penalty to allow the Beavers into the red zone. A two-point run made it 14-8.
Westfield answered back.
Later in the second quarter, Westfield extended its lead to two touchdowns with a nice 10-yard slant over the middle from St. Pierre to sophomore wide receiver Bailey Collier. Collier’s TD catch came with 5:19 left in the half. St. Pierre scored on a 2-point run.
As they have done all season, the Westfield Bombers kept their collective feet on the pedal.
Westfield came out on the opening drive and raced down the field with three big plays – a 26-yard Wilton Royal catch-and-run, a 25-yard QB keeper, and a St. Pierre to Collier scoring strike 1:21 into the second half. Collier cut across the back of the end zone for the TD. A St. Pierre 2-point run gave the Bombers a 30-8 advantage.
Another St. Pierre touchdown, this time a 1-yard plunge, made it 36-8 with 3:26 left in the third quarter. The senior QB set up the score with a 53-yard run on the drive’s first play from the line of scrimmage.

BOYS’ SOCCER
Bombers silence Golden Eagles
Westfield 6, Central 0
Sam Winiarski (1 goal, 3 assists), Ryan Prenosil (2 goals, 1 assist), Aiden Dunn (2 goals), and Marc Botin (1 goal) contributed on the offensive side for Westfield.
“We’re happy with how we attacked when we were in possession of the ball, and maintained a pretty high level throughout the game,” Westfield coach Andrew Joseph said. “It’s something to build on certainly toward the postseason as we continue.”