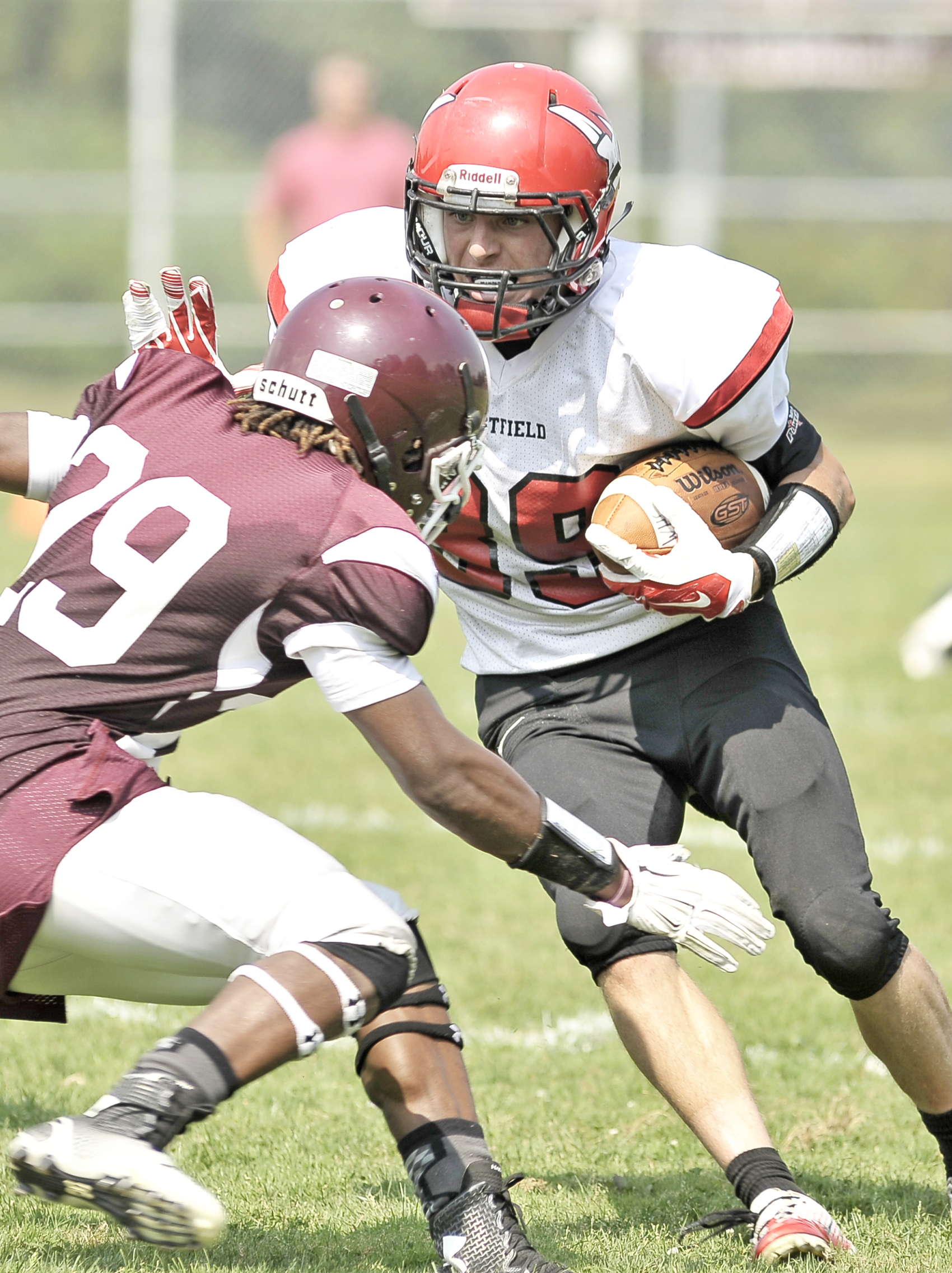 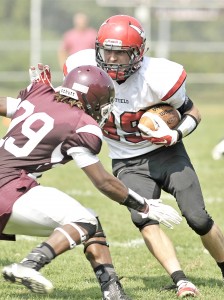 Amherst defensive back Jericho Sylla attempts to stop Westfield senior halfback Cody Neidig, who carries the ball into the teeth of the Hurricanes defense in Saturday’s season opener. (Photo by Frederick Gore)

AMHERST – If first impressions mean anything, Westfield sophomore quarterback Austin St. Pierre and first-year head coach Rocco Fernandez should be applauded for a bruising effort in their first meaningful game.
St. Pierre tossed one touchdown and ran for another, and senior halfback Cody Neidig scored two TDs (one rushing, one receiving) to lead the Westfield High School football team to a well-earned 21-14 win over host Amherst Saturday.
“It was a real big win for us because we didn’t want to start out 0-1,” St. Pierre said. “We wanted to start off 1-0 on the road.”
Although it was only an independent contest, it was the first of three road games to begin the season for Westfield.
The Westfield coaching staff may have drawn up the first few plays of the game, but things didn’t quite go according to plan on the first series. The Bombers turned over the ball deep in their own territory, leading to Amherst’s first score of the game.
Amherst pounced on the ball, and quickly cashed in with a one-yard touchdown run from senior running back Brandon Rivera.
With a young quarterback, a first-year head coach, and new offensive scheme, Westfield could have wilted under the pressure and the sweltering heat. Instead, the Bombers battled back.
Westfield marched down the field with St. Pierre directing the attack by land and air, and Neidig ripping off big chunks of yards on the ground.
The Bombers capped off the drive with a nine-yard touchdown pass from St. Pierre to Neidig. Neidig slashed across the front of the end zone with 3:19 remaining in the first quarter. He also tacked on the extra point to tie the game 7-7.
One of the key plays on the drive included a long third down pass completion to senior tight end John Bucko. 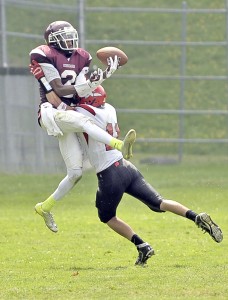 “I was trying to keep everyone together, and make it right so we wouldn’t get out of sync,” St. Pierre said on his team responded after turning over the ball early. “We started to drive the ball, and shove it down their throats.”
Amherst responded.
The Hurricanes moved the ball downfield on the ensuing drive, and capped it off with a short jump ball touchdown on fourth and goal from senior quarterback Jamie Carey to senior wideout Taj-Amir Torres.
Despite going 3-and-out on its next series, Westfield stepped up defensively, forcing a punt. The Bombers’ special teams unit elevated its game as well, blocking the punt.
Westfield, starting from the 7-yard line, worked hard for its next score. Pounding the defensive unit, the Bombers finally broke through the end zone on fourth and goal from 3 yards away when Neidig ran it up the gut and scored with 5:09 remaining.
Both teams entered halftime tied at 14-all.
The second half was a coming out party for St. Pierre, who directed the game-winning drive and evoked leadership not typically seen in a sophomore QB.
St. Pierre engineered a long, time-consuming drive that resulted in a short quarterback plunge with 1:56 left in the third quarter.
Westfield’s defense stood tall on Amherst’s next possession. Defensive ends Marc Blahut and Jake Collins, and defensive linemen Andrew Blahut coverged on the Amherst quarterback for a first-down sack. On the next play, Bombers’ junior outside linebacker Scott Hoiberg intercepted a pass near midfield.
If anyone still had questions about how Westfield’s sophomore quarterback would respond under pressure, they should have been taken aback after one jarring play late in Saturday’s game. 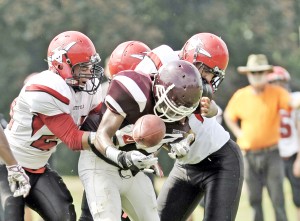 With the Bombers leading by a touchdown, St. Pierre kept the ball on a quarterback keeper and bullrushed a defensive player, sending the Hurricane flying backward five yards off the ball.
Westfield chewed up the rest of the time in the second half with plodding runs, timed passes, and pressured Amherst into coughing up the ball, either after four downs or with a turnover.
“These guys played all 48 minutes,” coach Fernandez said. “They got it going near the end. We had to make the most of our opportunities … The kids that we’ve got all stepped up. They’re all fighters.”
Fernandez admitted that, despite the win, it was not a crisp effort.
“We were totally sloppy,” he said, alluding to costly penalties, missed blocks, and other blown assignments.
Neidig fumbled the ball early in the game, but Fernandez said that could easily be forgiven after discovering the senior back had either broken or dislocated his finger on the play.
“I had to drag Cody off the field today,” the coach explained, noting the senior back’s desire to play through the injury. “That speaks volumes about his character.”
Neidig had his fingers taped up, went back on the field, and thankfully, for the Bombers, delivered a hard-nosed effort.
Westfield will have a while to let the victory sink in before directing its focus on its next opponent, West Springfield. The Bombers, who have a bye next week, will travel to play the Terriers Friday, September 19. Kickoff is at 7 p.m.