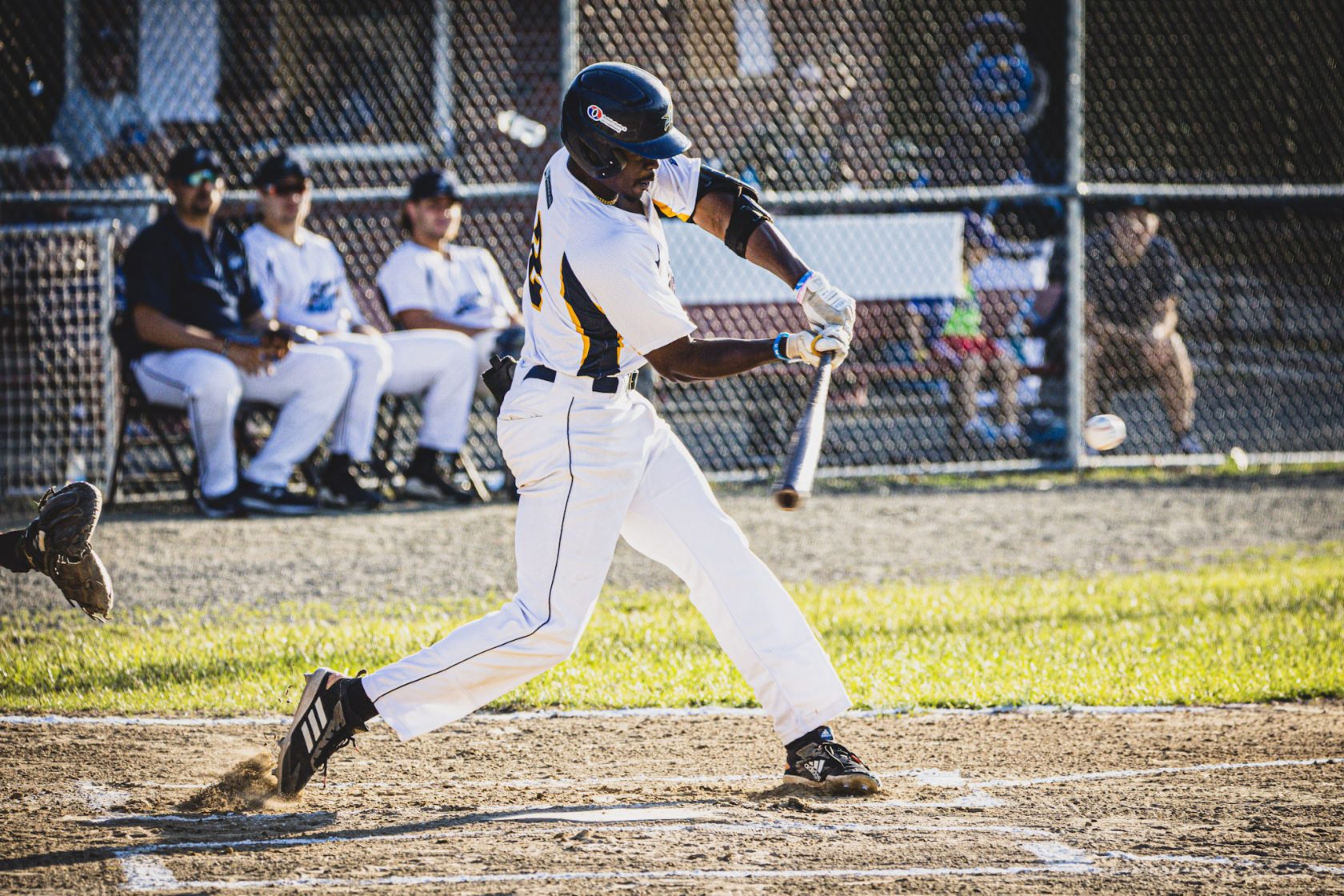 WESTFIELD – At this point early in the season, there is no disputing the fact that something magical is in the air of late at the Westfield Starfires home ballpark.
Westfield won its fifth home game in six tries at Bullens Field, turning back the Brockton Rox 12-2 in eight innings Thursday night. The Starfires improved to 6-9 with all six victories having come at home this season in the Futures Collegiate Baseball League. 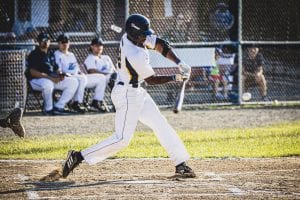 Starfires’ Jaden Brown rips a RBI double to right center in the first inning to put the home team up 1-0 against the Brockton Rox Thursday night at Bullens Field. (DAVE HOSMER PHOTO)

It was the second time this season that the Starfires defeated the Rox in eight innings due to the mercy rule.
The Starfires drew first blood in the bottom of the first, scoring on back-to-back, two-out doubles from Peter DeMaria and Jaden Brown.
The 1-0 lead would not last long, however, as the Rox responded in the top of the second. Pat Roche singled to lead off and reached second on a wild pitch. Justin Riemer advanced Roche to third and he came home on a fielder’s choice off the bat of Ryan McKenna.
The Starfires were retired in order in the second, third, and fourth innings by Rox starter Eddie Curley. They sent nine men to the plate in a fifth inning that would produce four runs with the help of four singles, two walks and an error on the third baseman, Tommy Lapham, on a sharp ground ball.
The Starfires added two more in the sixth inning with the help of one single, three walks and a hit batsman.
The Rox would score one more in the top of the seventh on a sacrifice fly from Ryan McKenna.
After going down in order in the seventh, they ended up walking the game off via the run rule, scoring five in the eighth inning. The inning began with three consecutive singles to load the bases. With one out, Cole Bartels hit a weak bloop single into right field to drive in two runs. Three more singles would bring in three more runs, the last being hit by Cam MacIntosh, to make the run difference 10 and end the game.
Westfield starter Ryan Shea got the win after pitching seven strong innings, allowing two runs on five hits, as well as striking out four. He was able to get out of a second and third situation with nobody out with just one run coming in. Zach Clevenger pitched one inning of scoreless relief. Eddie Curley took the loss after pitching five innings and allowing five runs, two of them earned, on six hits. He walked two and struck out two.
The Bullens Magic is real for Westfield.
In their last six home games, Westfield has outscored the opposition 53-23. It is a sharp contrast to their road record. The Starfires are averaging just two runs per game away from their home confines, having been outscored by the opposition, 76-12, in those road contests.
The Starfires return home to Bullens Field Wednesday against the Suns. First pitch is at 6:30 p.m. – Material from the Westfield Starfires was used in this report