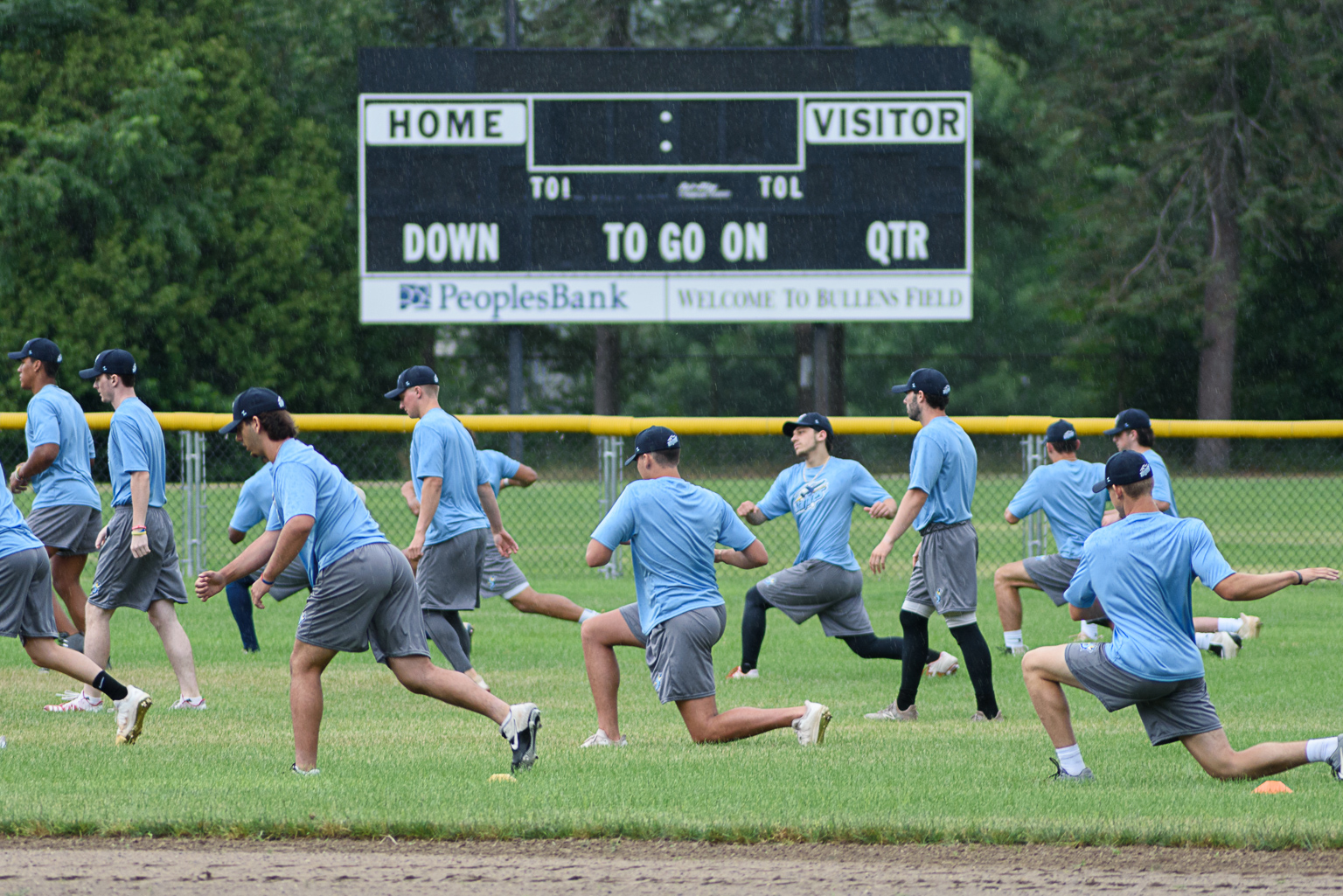 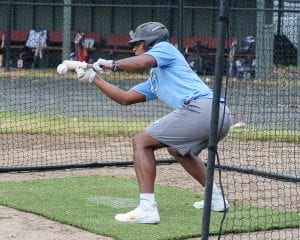 WESTFIELD – It was a sight to behold.
For the first time this spring, baseballs left the yard with some regularity during batting practice – – the first official Westfield Starfires team practice – – Monday at Bullens Field.
Team officials welcomed the ball players to the field, laid out social distancing guidelines, and emphasized the opportunity given to players of the Futures Collegiate Baseball League, while leagues at all levels struggle to get going all across the country.
New Starfires Director of Player Personnel Hunter Golden delivered some inspirational words to the ball players just moments before they took the field.
“We’re the only act in town,” Golden said as players stood in front of the backstop and the dugout fences, a few feet apart from each other. “All eyes are on us.”
Earlier in the spring as coronavirus cases began to spike, college campuses began to close, sports was halted and student-athletes were sent home.
“We’ve been looking forward to this since our season (abruptly) ended in college,” said Westfield Starfires pitcher Jimmy Hagan, whose collegiate baseball debut for Division I school Quinnipiac University as a freshman was cut short due to the COVID-19 outbreak. Hagan is a 2019 graduate of Westfield High.
The Quinnipiac baseball team had just wrapped up a two-game set in Georgia and was heading to Tallahassee, Florida on a bus when they received word that the season had been cancelled. They were re-routed to Orlando, Florida, and were flown home by plane the next day.
Over the last several weeks, Hagan said he has done his best to stay in shape, having adopted a strength and conditioning program shaped largely by his collegiate baseball coaching staff.
“We’ve tried to stay ready as much as we can for this moment and now we have it,” Hagan said. “We’ve been looking forward to this since our season (abruptly) ended in college.”
High school and college sports teams were not the only ones affected by the coronavirus. The New England Collegiate Baseball League, which is home to the region’s Holyoke-based Valley Blue Sox, and the Cape Cod Baseball League followed suit, shutting down amid health concerns.
“Being able to play this year is a bonus because a lot of people can’t (play),” Hagan said. “We’re lucky to be out here.”
Another local hurler, righty Carter Cousins, also of Westfield, who is bound for Georgetown University this fall, bubbled with enthusiasm while donning the Starfires jersey for the first time Monday.
“Any opportunity to play baseball is awesome,” Cousins said, “but to be in Westfield, be in our home and play baseball, this is going to be special for us.” 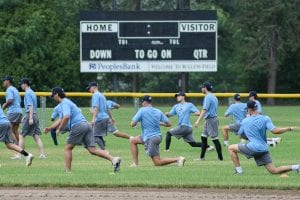 Westfield Starfires begin to stretch out for the 2020 Futures Collegiate Baseball Season Monday at Bullens Field. (Photo by Marc St.Onge)

The Starfires are scheduled to open the season July 3 at the Nashua Silver Knights. The two teams will meet again July 7 in Nashua, N.H., before the Starfires return to the Whip City for their home opener July 8 against the Worcester Bravehearts. First pitch at Bullens Field is set for 6:30 p.m.
Although state and local guidelines have not still not been established for games, Starfires team officials continue to reassure the public that Bullens Field will be a safe, family-friendly environment for all.
Players also appear to be on board with the changes likely to come as a result of social distancing measures.
“It will be different with some of the rules like only having starters in the dugout, and if we’re sitting in the stands or on the bench or separated down the bullpen it may take a little getting used to,” Hagan said, “but it’s baseball. Once you’re out there you kind of almost forget about it all. We’re just lucky to play.”
Anyone interested in purchasing tickets for Starfires home games is urged to visit the team website – westfieldstarfires.com. Tickets are affordably priced at $10 apiece for general admission. Parking is free.
“I played at Bullens almost my whole life and the best thing about Bullens is all the people who come out – the fans, the friends, the family,” said Cousins. “I one hundred percent expect the same thing this year. Billy Bullens Field; it’s Westfield, a baseball town. How could you not want to come watch the Starfires?”