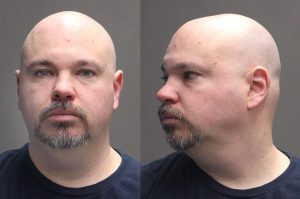 WESTFIELD – A city firefighter was held without right to bail after he was arraigned in Westfield District Court Monday on a charge of enticing a child.

Westfield Police Det. Jason Williams reports in a court document that an “online exploitation sting” operation conducted by a Newbury Police detective working with the Massachusetts Internet Crimes Against Children Task Force had developed evidence that the suspect had initiated contact with the detective who was using a screen name which suggested “the account belonged to someone under the age of 18.”

Williams reports that the detective was posing as a girl on online chat rooms and, when asked how old ‘she’ was, the detective told the suspect that ‘she’ was 13-years-old.

The investigator reports the man posed “sexually suggestive questions” to the ‘girl’ and had offered to meet her saying “We could go out if you pretend to be my daughter lol” and “We could go shopping but you gotta call me dad.”

The report explains how the investigation proceeded to a video chat session in which an undercover officer posed as the ‘girl’ who surreptitiously captured an image of the suspect which, the detective reports, “was the same person who had previously sent a picture of himself” to the ‘girl’.

The detective reports the suspect was later identified as Richard R. Paul, 42, of 25 Montgomery St., Southampton.

William’s reports also notes that Paul is currently employed as a firefighter in Westfield and that information gleaned from search warrants executed during the investigation show that he used a computer at the the Northside fire station ,where he works, to correspond with the ‘girl’.

A Facebook page posted to an online forum shows a man who fits the description of the man in the picture the detective reports the suspect sent to the ‘girl’ and shows a bald man with a goatee holding a baby. The page lists the name ‘Rick Paul’, a married man from Southampton, who works both as a Westfield firefighter and as an EMS coordinator at Baystate Health. The page also includes a photo of the same man with a woman and a younger female – as well as a dog.

Paul was arraigned Monday on a single charge of enticing a child younger than 16 years-of-age and was held without right to bail pending a dangerousness hearing on Thursday.

In addition, if convicted, Paul would be required to register as a sex offender.