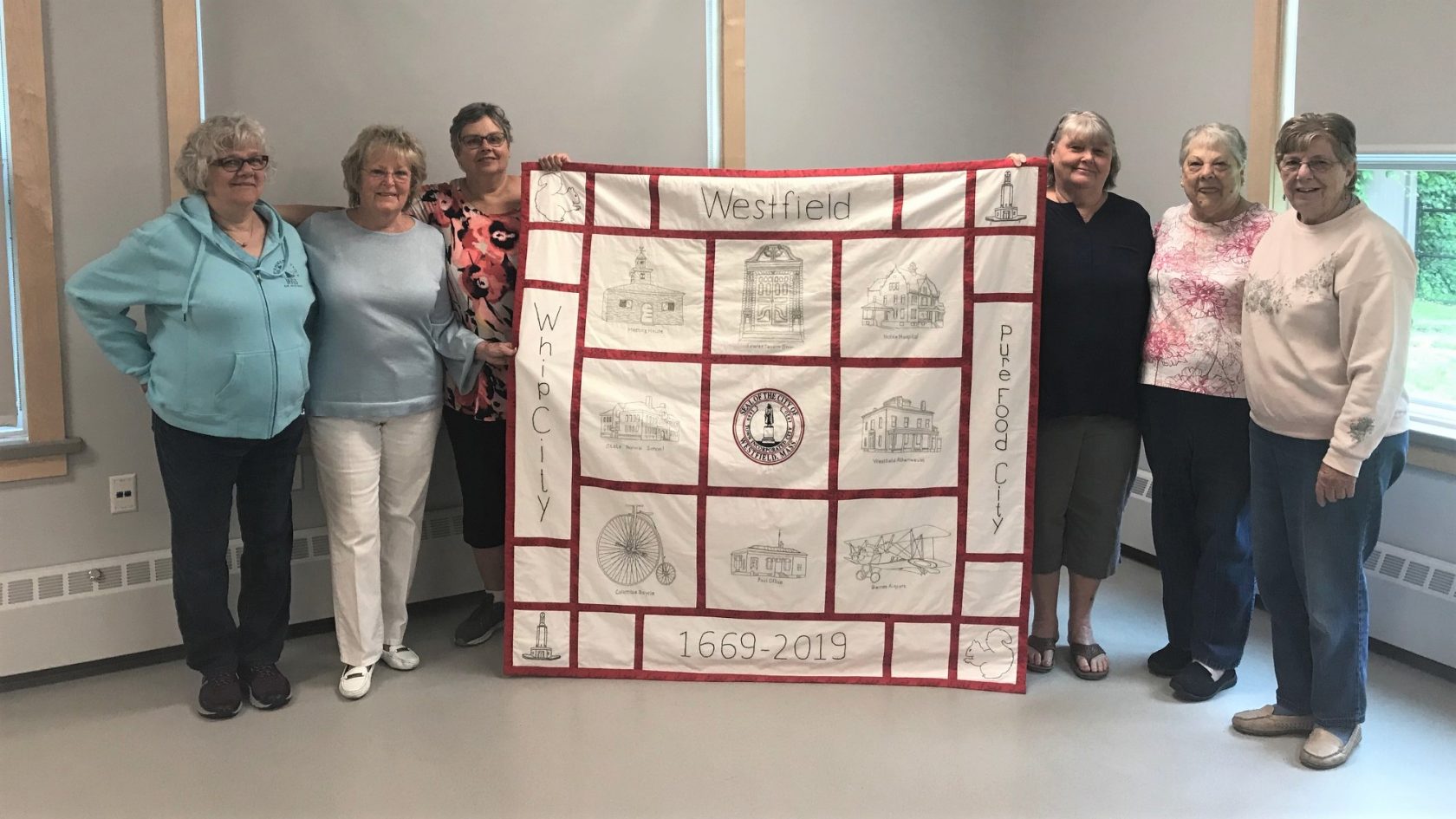 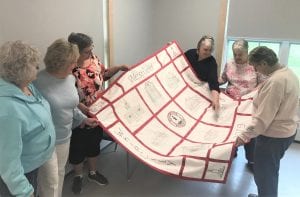 Members of the Piecemakers Quilting Group of the Westfield Senior Center look on as Helene Gates, center, points out one of the iconic images of the city used in a quilt the group made in honor of Westfield’s 350th birthday. (Hope E. Tremblay Photo)

WESTFIELD – A group of quilting and sewing enthusiasts has left its mark on the city.

Eight women, who are members of the Piecemakers Quilting Group of the Westfield Senior Center , created a quilt to commemorate the city’s 350th birthday that was raffled and coincidentally won by one of its creators.

Gladys Hedges knows the labor and love behind the quilt because she was one of the women who made it. She said she hoped whomever won it would donate it to the Westfield Athenaeum, and that is exactly what she plans to do as the lucky winner.

“It belongs in the Athenaeum for historical preservation,” she said.

Hedges did say she was going to bring it home first to show her friends and family, but already arranged to donate it.

“The Athenaeum will display it on occasion, but will keep it preserved for the future,” she said.

The quilt features embroidered iconic images from Westfield, many of which were taken from postcards from the 300th anniversary celebration.

Quilter Jeanette Fletcher kept the postcards as a memento. The group was also inspired by a book from the 250th anniversary Fletcher’s grandfather kept.

This was Fletcher’s second time commemorating a Westfield milestone with needle and thread.

“For the 300th, I was working at Eaton’s clothing store and made colonial outfits for my boss, his wife and I to wear,” Fletcher said. “It was something my boss asked me to do because we were on the parade route.”

More than a year ago, Westfield 350 Committee member Mary Hoth reached out to the Piecemakers, of which she is a member, to create a quilt.

“I expected them to think about it a while, but they said yes right away,” said Hoth.

It took the women several months to pore over the photos and select the images.

“Originally we wanted to have the photos printed on fabric, but that didn’t work out,” said Fletcher. “So Helene (Gates) and Sarah (Kirst) got light boxes and traced the images on the fabric, then embroidered them.”
Gates said once they knew what they wanted to do, the quilt came together quickly.

The quilt has a white background and red and black thread with a red printed backing. It includes the famous Westfield Black Squirrel and the Westfield whips. The city was once the world’s largest producer of buggy whips, but just one whip company remains today.

Other icons included in the quilt are the Carillon Tower from Stanley Park, the Meeting House, also in Stanley Park, the Fowler Tavern Door, Noble Hospital, Westfield Normal School, the Seal of the City of Westfield, Westfield Athenaeum, Columbia Bicycle, the Old Post Office, Barnes Airport, and Pure Food.

The quilt was displayed throughout the city before the raffle, which took place the anniversary of Westfield’s incorporation, May 19.