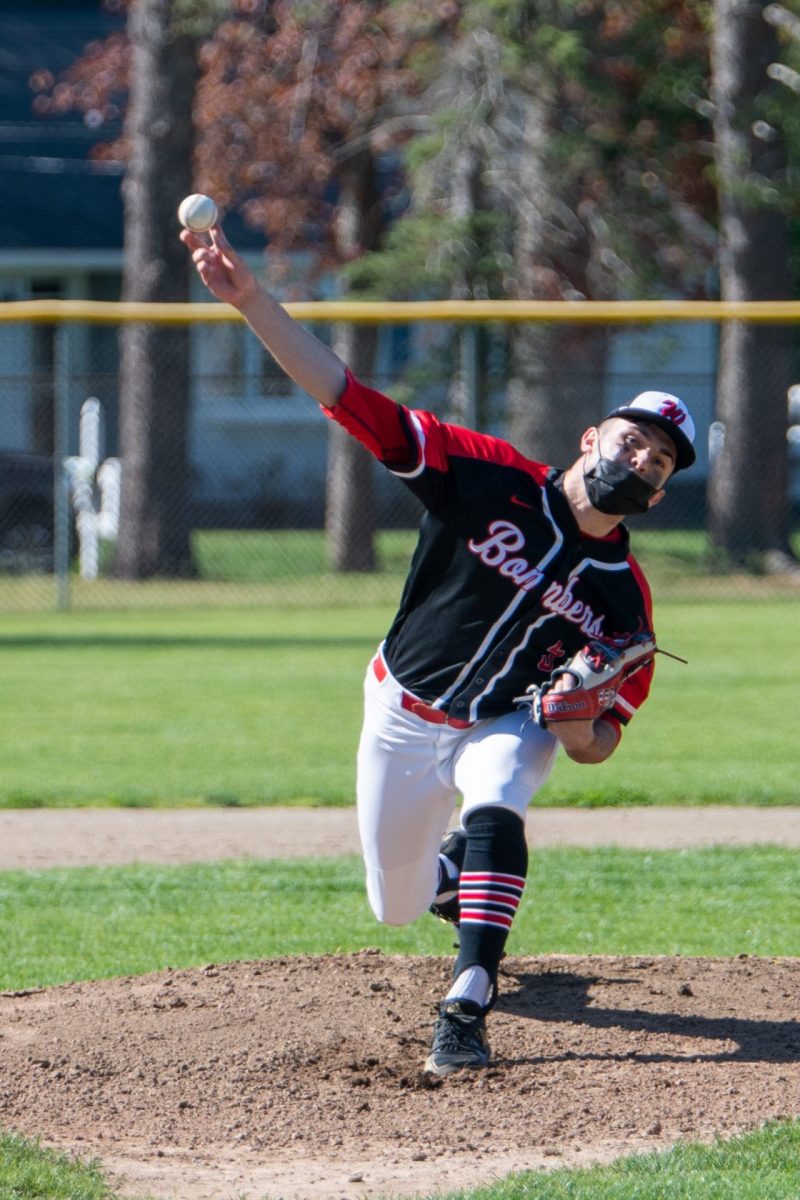 WESTFIELD – It was a Strange baseball opener for the Westfield Bombers in more ways than one.
Westfield senior ace Brian Strange struck out 12 batters and tossed a six-inning, two-hitter – – and lost. Pope Francis pitcher Ryan O’Leary threw a complete game three-hitter and the Cardinals squeaked out a 1-0 win over Westfield in an opening day pitcher’s duel Thursday at Bullens Field.
Pope Francis’s Ryan Leonard hit a wind-blown ball over the center fielder’s head for a run-scoring triple in the fifth inning for the game’s only run of the day.
“It’s just two scrappy ball clubs … two good pitchers going at it,” Westfield High School baseball coach Mike Kennedy said. “This is what it’s going to be like the whole year.”
Both team’s pitchers were more than ready for the start despite not seeing the field for nearly two years due to the pandemic. 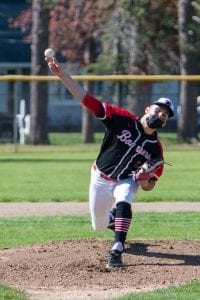 O’Leary attempted to help himself at the plate, drawing a one-out walk in the first inning. Westfield first baseman David Tirrell picked him off though on a nice move and throw to first base from Strange.
Westfield lead-off batter Joey Calderella walked to lead off the home half of the first, but was caught stealing to end the inning.
The first batter of the second inning, Bobby Triglio, reached against Strange on a dropped third strike and advanced on an infield error, but the Westfield pitcher retired the next three batters in order via a ground out and two flyouts, the latter of which was a sensational diving catch out along the right outfield line made by James Cloutier.
Westfield briefly threatened in the home half of the second. Alex LaCourse hit a one-out base knock, but two straight fly outs ended the inning.
After Strange retired the side 1-2-3 in the third inning, O’Leary reached again, this time on a line drive single up the middle. Strange bounced back though striking out three of the next four batters to end the threat.
The bottom of the fourth inning appeared to resemble a bit of a golden goose for Westfield, but soon looked like a wounded bird.
David Tirrell walked with one out. Strange was hit by a pitch. A fielder’s choice turned into an error, loading the bases when Pope Francis botched a play at second base. It was a bad turn of fortunes for Westfield though as Strange slid awkwardly into the bag, and departed from the game, albeit briefly. The bases were loaded, but the Bombers flied out and grounded out to end the inning.
Pope Francis leapt into the driver’s seat in the top of the fifth inning when Devlin Sears walked and scored on Leonard’s RBI triple.
Westfield wasted another opportunity in the sixth. Josh Mayo led off with a single, but the Bombers hit into a 1-4-3 double play and flied out to end the inning.
“It was definitely two wasted opportunities,” coach Kennedy explained. “Those are things we need to work on. I need to get the guys to know situational ball and drive it when it needs to be driven.”
Mayo delivered a superb inning of relief in the seventh, recording three straight Ks and giving his team one final crack at a comeback.
LaCourse logged the team’s third hit of the game – – and his second in three at-bats – – by leading off the seventh with a single through the left side of the infield. Westfield inserted a pinch runner, who was soon caught in a run down and tagged out. Cody Collins smacked a one-out single through the right side of the infield. James Cloutier was hit by a pitch. With runners at first and second, O’Leary struck out a batter – – his fourth K – – and forced a pop fly to end the game.
“We’re going to come back stronger and we’re going for that Western Mass title,” Strange said after the tough-luck loss. “I was just doing my thing out there. I’m going to be doing that all year. I have faith in my guys. We’re going to come back and hit better.”
Despite suffering a loss, coach Kennedy expressed his enthusiasm regarding his pitchers’ performances on the mound.
“They have good stuff,” Kennedy said. “To see that coming out of a sophomore (Mayo) – – we saw it with Brian two years ago – – that’s impressive.”
Westfield returns to action May 13 against West Springfield at West Springfield Middle School. The game begins at 4 p.m.