WESTHAMPTON – All good things must finally come to an end … or at least that’s how the saying goes.
For the first time in more than a decade, someone other than Westfield has won a high school gymnastics meet. Minnechaug was the culprit, posting a monumental upset Tuesday night with a final score of 131.9 at Hampshire Regional High School. The Bombers finished with 131.15 points; the Hampshire Red Raiders, 126.125.
“Minnechaug was the stronger team tonight,” said Westfield coach Angela Henrickson, who admitted it was a tough night. 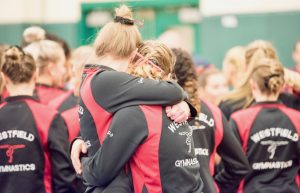 Minnechaug’s Kyla Miller won two events, and finished first all-around with a score of 34.525 to stop Westfield’s winning streak at 179-0. Miller captured gold on the balance beam (8.95) and vault (8.75).
“Kyle and Sam (Druckenmiller) were outstanding,” Henrickson said of the high-flying Falcons. “We had a rough start on bars but finished the meet strong on beam, and were able to keep the loss under a point. …We were happy to see (Minnechaug) coach Cheryl Palm take a much-deserved win tonight and we will be ready to face them again on Friday.”
Mairead Hagan did all she could to try and preserve the streak. The Westfield senior gymnast placed first on uneven bars (8.6), and was third all-around.
“Mairead kept her composure and had her best meet of the season despite the mounting stress throughout the night,” Henrickson said.
Westfield’s Madison Somppi finished second on floor exercise (8.8) and placed fourth on balance beam (8.55). Bombers’ Caitlin Daniels was third on vault (8.25).
The Bombers will look to avenge their loss Friday when they host Minnechaug – and Chicopee – on senior night at WHS. The special event begins shortly before 6 p.m.

FIELD HOCKEY
Gorman’s two points seals it
Southwick 2, Mahar 0
Sydney Gorman had a hand in two goals, scoring once, and assisting on another in Southwick’s shutout. Emily Martin also scored for the Rams, and Caroline Wilcox had an assist.
Southwick goalie Clare Stratton (7 saves) pitched a shutout.