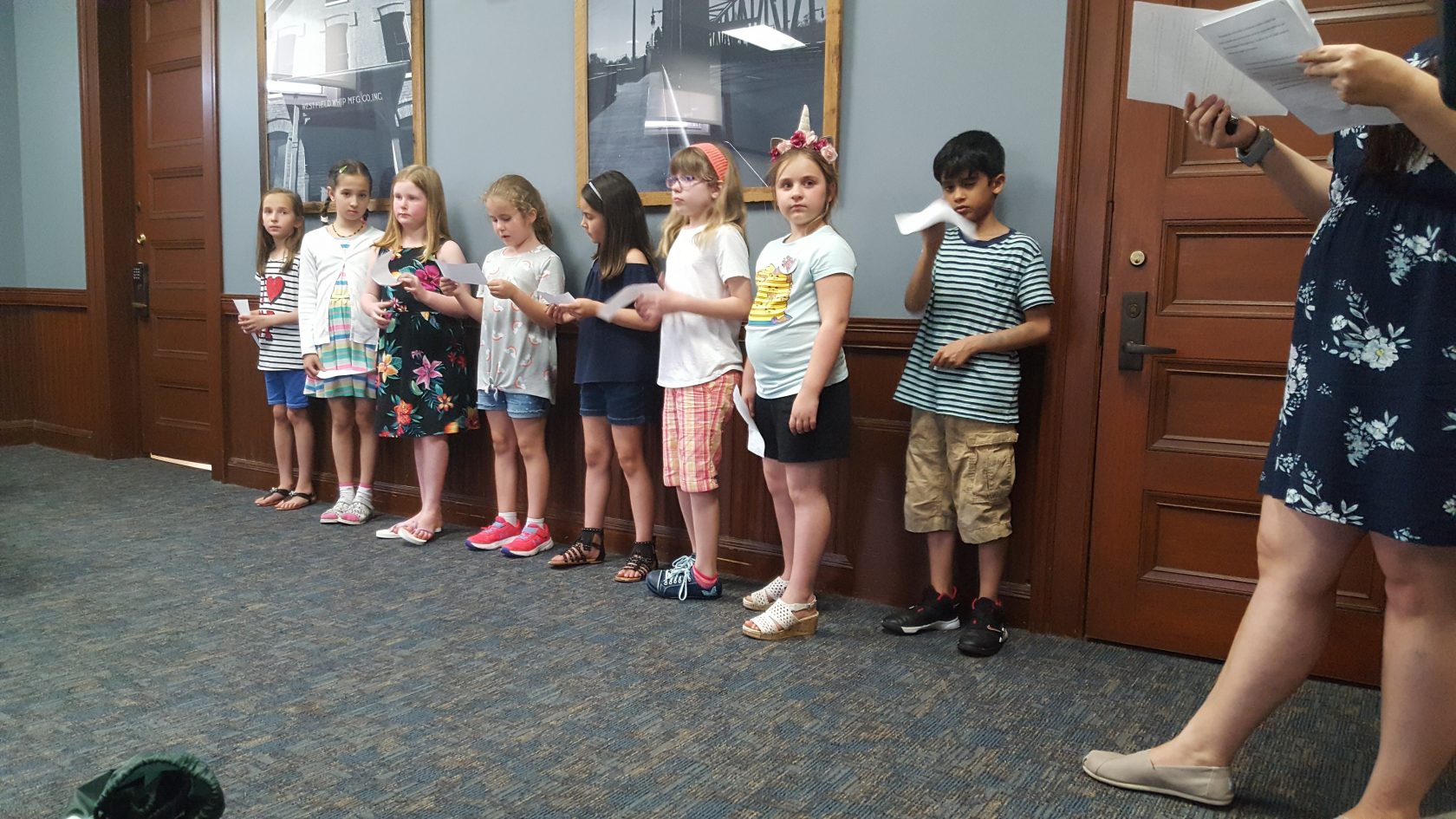 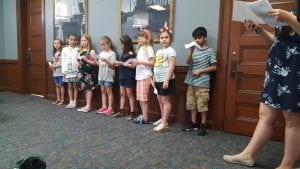 2nd graders from the Paper Mill School make a presentation to the commission on the importance of celebrating the native people’s that once occupied the area. (Photo by Peter Currier)

The request was made during the Historic Commission meeting.

The students, led by their teacher Kathy Knapik, came to propose that a monument of some sort be built in recognition of one of the tribes that lived in this area before European settlers came to what is now Westfield.

“There are some street names, there used to be a bank with the name, but right now there’s nowhere to really go to teach kids and show the community how it actually did start,” said Knapik.

Knapik added that the students each made drawings of what they believe a monument for the Woronoake should look like. Some were modest in scale, while others were ambitious in making a monument the size of the Statue of Liberty. When some of the kids were talking about the work they did, they noted that although we celebrated the 350th anniversary of the incorporation of Westfield this weekend, the history of the area begins thousands of years before any settlers reached the area. The students wanted the monument to be placed in an area that is believed to have been the location of the Wornoco Village in Westfield.

The students said they contacted Mayor Brian P. Sullivan and the Westfield City Council to propose that such a monument be built. The members of the commission gave their endorsement Monday.

The commission also reviewed this past weekend’s Westfield 350 celebrations and tried to estimate how many people came out to take part or watch the events. Commission Chair Cindy Gaylord presented fellow commissioners Carlene Bannish and Cynthia Bronson with pots of flowers in appreciation for the two of them having been at most of the events leading up to last weekend.

“As Harry [Rock] said, it takes a village. But it does. It went without a glitch because so many people were so dedicated and so involved,” said Gaylord.

It was suggested at one point that more lectures similar to the 350 Historical Lecture Series should be presented in the future due to the apparent high interest in them. The commissioners also tried to guess how many people attended both the parade and the fireworks this weekend. Previous estimates by Rock, president of the Friends of the Westfield 350, puts the attendance of the fireworks around 5,000 people. The parade is harder to guess, since people are not gathered at a single location but are spread out throughout the route. The number, by the commission member’s estimations, was surely in the thousands.

“The city did a fantastic job,” said Gaylord, “But the thing is that it wasn’t the city. The entire thing was funded by private donations.”

The commission also gave an update on the cleaning day for the Old Burying Ground on Mechanic Street. On June 9, Boy Scouts and fifth graders will join the commissioners at the burying ground and cleaning headstones with a substance called D2. Gaylord said that they would be going to the cemetery and spraying some of the dirty and stained gravestones with water before spraying them with D2, which removes biological stains like moss from the stones and makes them look newer. They then use toothbrushes to remove the stains, because using any other method risks damaging the stones. The commission does this event every year according to Gaylord.

“We’re able to do 40 to 50 stones each year in about three hours,” said Gaylord, “We get quite a few helpers, and we get families each year who have asked to come back.”

Gaylord announced that the Open Gate Day for the Old Burying Ground will likely be postponed due to having little time before school ends in Westfield. She also announced that historic tours will be given next Wednesday, May 29 beginning at the Westfield Athenaeum at 8:30 a.m. They will spend an hour at the Athenaeum and then go on a historic walk. Gaylord said Carol Martin of the Whip Museum and local historian Bob Brown would assist with the tours.