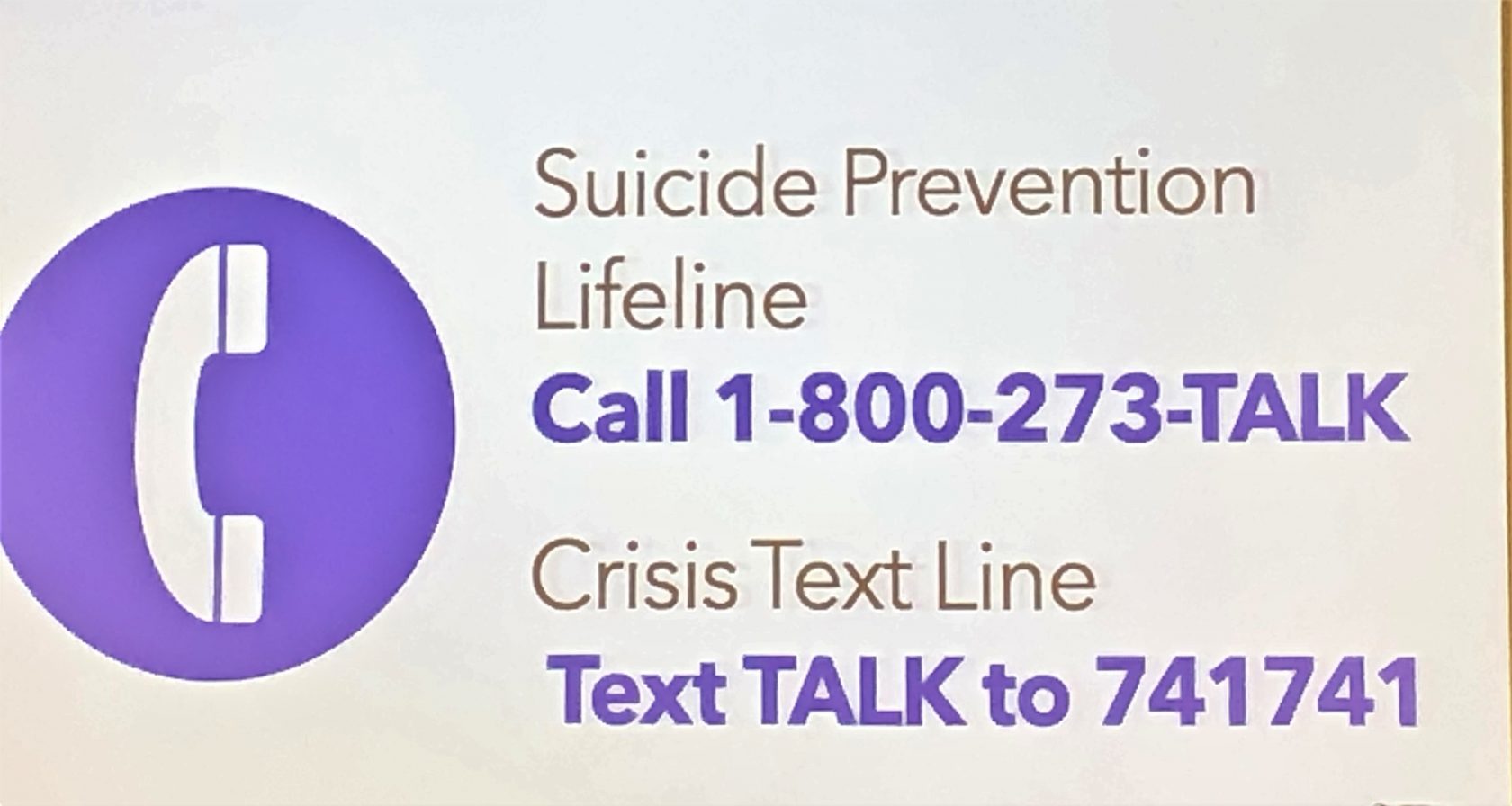 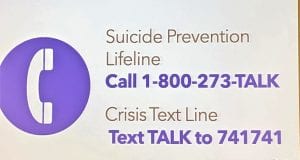 WESTFIELD- In support of Suicide Prevention Week, Sept. 9 to 13, Baystate Noble hosted a “Talk Saves Lives” Lunch and Learn for both clinical and non-clinical staff hospital-wide on Wednesday.

Director of Behavioral Health Kelley Crowley said that the staff asked for the program.
“Suicide prevention is important to everyone. There’s a gap in training on how to interact with someone who is suicidal,” Crowley said. She said after last year’s program, she received feedback from members of the staff thanking her for giving them the format to grieve. She said she didn’t know how many had been personally affected by suicide.
Crowley said the hospital has started screening in all of the medical wards for signs and risk factors for suicide. She said while depression or suicide can’t be measured in a lab test, if they don’t ask the questions, they can’t learn who might need help.

“Suicide is as serious as a heart attack,” Crowley said.
Heather White of Westfield, area director for the American Foundation for Suicide Prevention, who gave both last year’s and this year’s talks, said that suicide rates are up 30 percent across the nation over the last twenty years. It is the tenth leading cause of death, and the only one that’s rising.
“Screening helps,” White said, framing it as a health problem, and putting mental health on the same footing as physical health. She said the symptoms are complex, but can be seen and prevented. 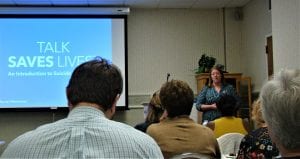 “Talk Saves Lives” is a community introduction to suicide prevention. White said people are exponentially more likely to come across a mental health crisis than one requiring CPR.
How we talk about suicide matters, according to White. Instead of saying people commit suicide, which has a lot of negative connotations, people can say someone died of suicide, or ended his or her life. She said they are also moving away from talking about someone having a failed or successful attempt.
“People think this is rare, but the statistics show it is not rare,” White said, adding that according to the World Health Organization, 800,000 people died by suicide last year, a number which she believes is under-reported.
In the United States, 48,000 people died by suicide in 2018. While tenth overall, suicide is the second leading cause of death for people ages 18 to 34, and the second leading cause of death for children ages 10 to 14, behind accidents. “A ten-year-old is four times more likely to die by their own hands than from cancer,” White said. 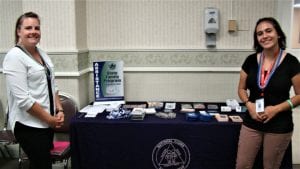 Amanda Winslow and Deanna Daniels of the Mass. National Guard Military & Family Program were also present at the Lunch and Learn. (Photo by Amy Porter)

Massachusetts ranks 48 out of 50 states for deaths from suicide, which is good, but it used to be 49, White said.

“Last year in Mass., we lost more people to suicide than to car accidents and homicides combined.”
White said there is no single cause. While mental health conditions, diagnosed or not, play a role in the vast majority of suicides; at any given moment, 20 percent of people are struggling with thoughts of suicide. If it is exposed, the picture becomes clearer.
She said most people who are suicidal are ambivalent about it, and it usually occurs when a crisis point has been reached. She said that crisis moment lasts only eight to 15 minutes on average, so the goal should be to keep someone safe for that eight to 15 minutes.
What people can do to help is to have a real conversation with someone who is struggling. Warning signs include talking about suicide, showing a change in behavior towards reclusiveness or giving away one’s possessions, or moods of depression, apathy, rage, anxiety, impulsivity or humiliation; any dramatic change, White said.
“Assume you’re the only one to reach out. Listen to their story with care and concern. Ask directly… are you struggling with suicide.”
The three main things to avoid are to minimize their feelings; try to convince them that life is worth living, and asking them to fix it. “Don’t say, it’s not that bad.”
White said, if you think someone might make an attempt, don’t hesitate to call 911. She said the AFSP also has a suicide prevention number at 1-800-273-TALK. 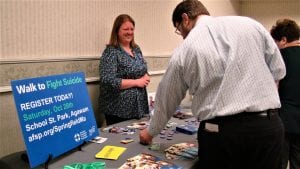 White said that research on suicide prevention is underfunded on the federal level. Her organization, the American Foundation for Suicide Prevention, is the largest funder, giving $6 million last year, all raised from walks. “The federal government isn’t investing in this; our walkers are,” she said.
The AFSP will be holding its annual Suicide Prevention Walk “Out of the Darkness” in Agawam on Oct. 26 at the School Street Park at 10 a.m. Registration begins at 8:30 a.m. “One of the things with suicide is people feel so alone,” White said, but being in solidary with the 3,000 people that turn out to walk helps to remove the stigma.
More information about the AFSP and the Out of Darkness Walk may be found at www.afsp.org.