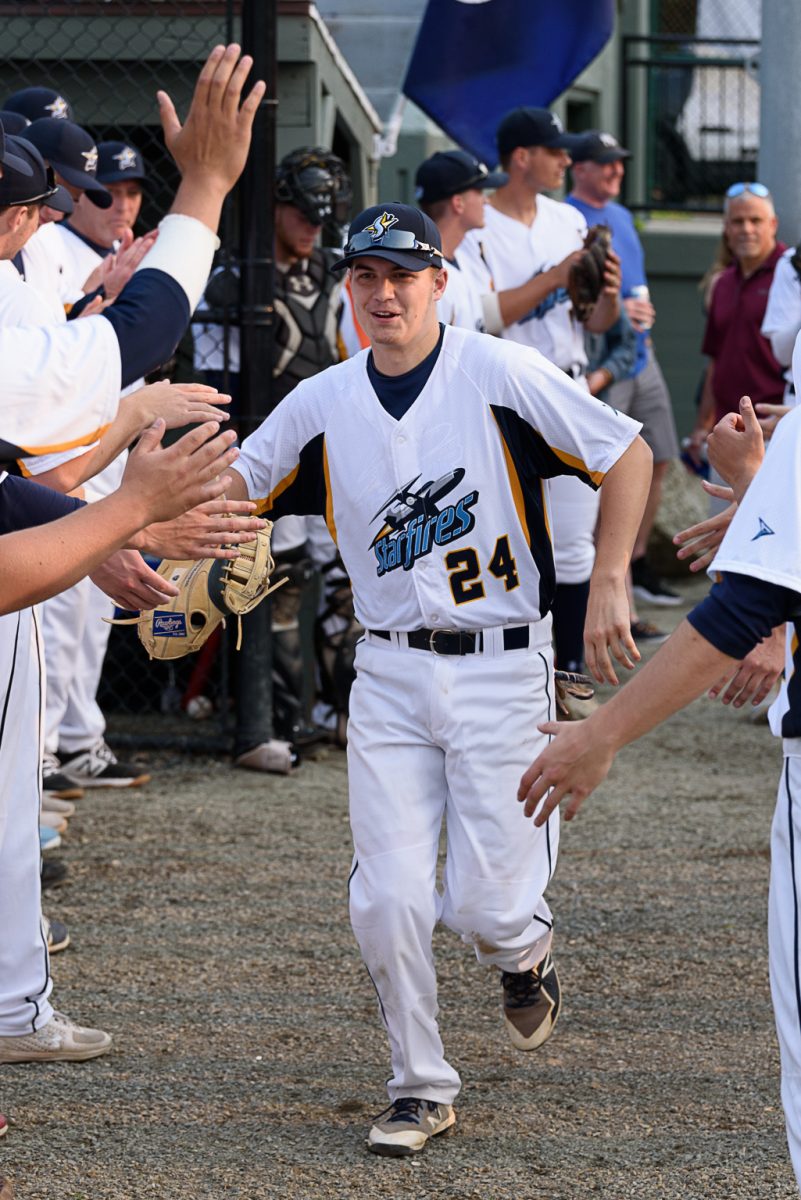 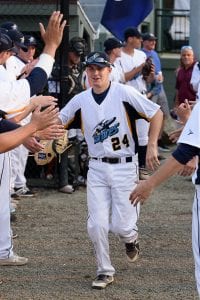 WESTFIELD – Uh oh. No. Noooooo!
It wasn’t nearly that dramatic, but the Pittsfield Suns came within two outs of no-hitting the Westfield Starfires on Opening Day in the Whip City.
“I didn’t expect to get no-hit,” said Westfield Starfires manager Bill Sandillo, following Friday night’s season opening 3-0 loss to the Suns at Bullens Field. “That I didn’t expect, but I’m glad we didn’t get no-hit at the end.”
Pittsfield starting pitcher Jon Morrison no hit Westfield, tossing five shutout innings before turning the ball over to the bullpen. Morrison struck out five batters and walked three.
Westfield starting pitcher Jack Fox was nearly as effective, allowing just three runs – only one was earned – on five hits and one walk. He struck out eight batters.
“I was just having fun out there, just competing, trying to stay focused every pitch, and just attacking,” Fox said.
Pittsfield’s lead-off batter Dom Hughes wasted no time in seeing what Fox was made of, collecting a base hit in the first at-bat of the game. It proved to be a harmless hit though because Hughes was immediately thrown out attempting to steal second base by catcher Anthony Clark, of Westfield.
The pitchers’ duel continued on for three scoreless innings until Pittsfield clean-up hitter Jack Khawly drove a ball deep to center field, doubling home Matt Malcom, who reached on a one-out single in the top of the fourth.
Westfield threatened briefly in the bottom half of the inning when No. 2 batter Bryce Walker walked to lead off the inning. Morrison recovered though, getting No. 3 hitter Thomas Joyce to hit into a 6-4-3 double play. Morrison struck out clean-up batter Clark to end the inning.
In nearly identical fashion, No. 5 batter Sean Moorhouse led off the fifth inning with a walk before Christian Walsh hit into a 6-4-3 double play.
“They were just mixing it up well,” Moorhouse said of the team’s opposing pitcher. “That changeup was hard to pick up. Mixing that slider with the fastball keeps us off balance.”
Pittsfield (2-0) padded its lead in the sixth inning. Hughes and Malcolm hit consecutive singles. Khawly loaded the bases with a one-out walk. Then, Dan Baruch launched a high fly ball into shallow center field. The second baseman drifted back into the outfield grass, and appeared to have it in his mitt, but it popped out onto the ground before he could squeeze his glove. Two runs scored, and the Suns led 3-0.
“I think if we get one hit early either way, it’s a different ball game,” Sandillo said. “Maybe it’s a 1-0 game then we score, it’s 1-1. Maybe it stays 1-1 into the seventh. It was that kind of a pitcher’s game. As soon as we made that error and two runs scored, it kind of deflated the kids a little bit. Coming back from 1-0 is different than 3-0.”
Pittsfield nearly blew the game open in the eighth inning, drawing three straight walks off the Westfield bullpen before the Starfires turned an inning-ending double play when the first baseman snared a line drive and doubled off the baserunner caught cheating toward second base.
Westfield threatened late.
Pinch hitter Tommy Quinn led off the bottom of the seventh inning with a walk off Pittsfield reliever Shaun Gamelin. Quinn was replaced by pinch runner Matt Costanza. Costanza advanced on a wild pitch. With one out, pinch hitter Andrew Ciacciarelli broke up the no-hitter with a single to left field. Sandillo waved Costanza around, but he was thrown out at home plate.
“If it was 1-0, I wasn’t going to send the guy,” Sandillo said. “It was 3-0. I didn’t know if they were going to make a perfect throw and they end up doing that. I didn’t know if they were going to look to second base. In a 1-0 game, it’s first and third one out and we’re going for the tie. Just a different scenario.”
The game featured a ceremonial first pitch, local officials and dignitaries were on hand to partake in the festivities, and a brand new beer garden opened. According to team officials, attendance figures were estimated to be 1,497.
“It’s the first game,” Sandillo said. “I think these guys are a little nervous to be out here to be honest. It’s a big event and first thing for this new franchise. They were a little bit overpowered. I think the first guy pitched really well. I think they played a little tight. I think they’ll loosen up as the season goes. Their pitch selection will get better, and we’ll make adjustments and we’ll be better. …I think they’re capable of winning a lot of games.”