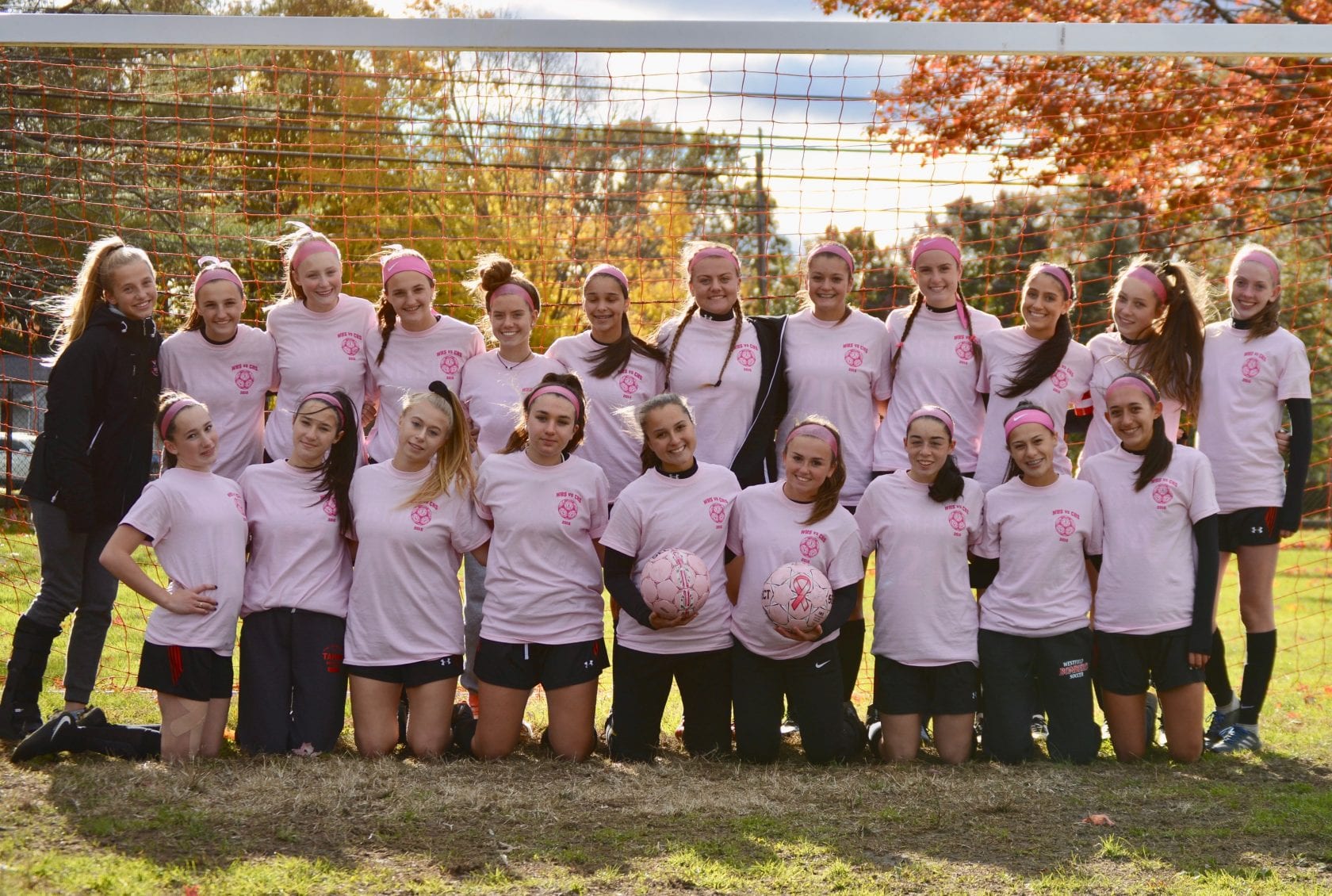 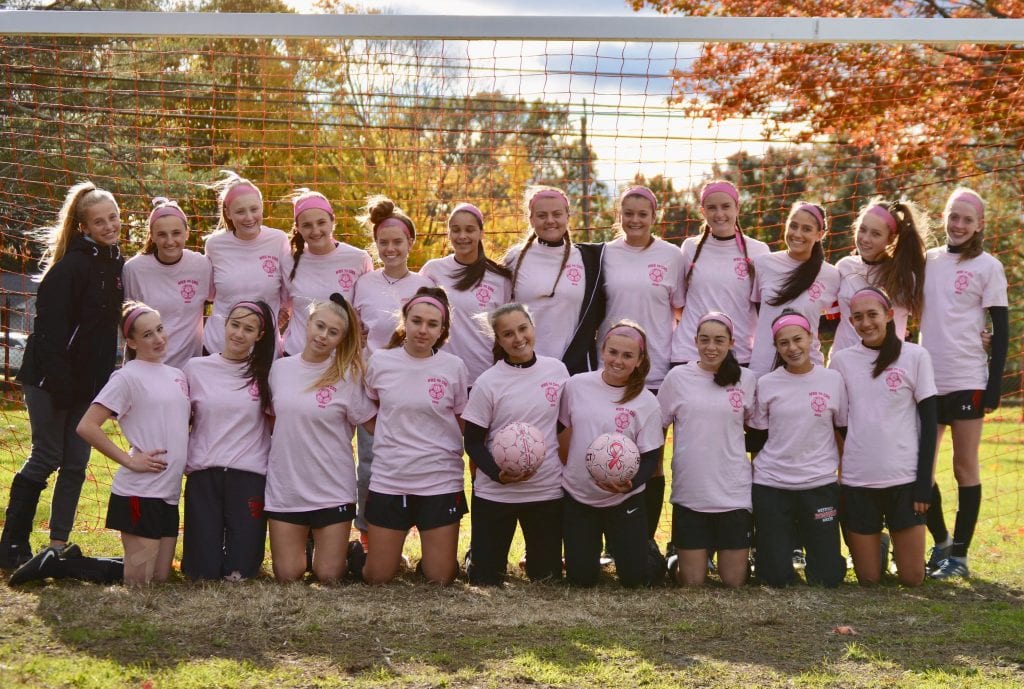 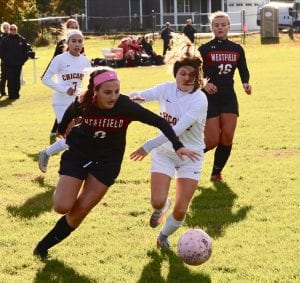 Westfield’s Chandler Pedolzky (9) stays a step ahead of the Chicopee defense. (Photo by Chris Putz)

WESTFIELD – Right now, the Westfield High School girls soccer team are delivering in more ways than one.
Westfield displayed its support of National Breast Cancer Awareness Month by donning pink shirts during warm-ups Thursday in a home game against Chicopee. Then, the Bombers went out and sent the Pacers packing, 6-0.
The first strike came in the 10th minute on a shot from Kaela Mochak. Megan Alvarado assisted. Mochak delivered again about two minutes later on a pass from Sophie Lewis.
Catie Bean set up Chandler Pedolky for a goal in the 16th minute. Pedolzky then assisted on an Alvarado score with six minutes remaining in the half.
Pedolzky had a score early in the second half and an assist late in the game. Riley Byrnes assisted.
Mochak tallied the final goal to officially net a hat trick.
Westfield goalie Adrianna Arona made two saves to earn a shutout. The Bombers improved to 14-2-1.

Goodreau nets game-winner
St. Mary’s 1, Putnam 0
Allie Goodreau broke a scoreless tie, scoring on an Amelia Willenborg pass after a scoreless first half.
St. Mary’s was down three starters but battled for the win.
“We had three starters go down but the girls out there battled and came home with our 10th win,” St. Mary’s coach Patrick Olearcek said. “We wanted to make sure out two seniors, Vicky Gargan and Maddie Donais, got the ‘W’ on their senior night.”
St. Mary’s is now 10-5-2 after finishing with no more than four wins for the past four seasons.

Gators deal Cards shutout
Gateway 2, Pope Francis 0
Angela Wright scored on a nice volley shot of Peyton Bucko’s corner kick at the 35-minute mark in the first half. In the second half, Bucko scored from about 30 yards out over the goalie’s head into the back of the net.
Gateway goalie Becca Herman (1 save) recorded a shutout.
“We controlled the game, but it took a while to figure out how to score against them with all the extra defenders in the box,” Gateway coach Steve Estelle said.
Gateway improved to 12-2-1.

BOYS SOCCER
Tigers locked in
Westfield Technical Academy 3, Putnam 1
Westfield Tech locked up the top seed in the vocational tournament with a key victory Thursday.
Phil Lisyannyy scored the first Westfield Tech goal on a penalty kick. Both teams entered the half tied 1-1.
In the second half, Brad Marion delivered for Westfield Tech, scoring on a sensational flick from Josh Bush. Stephaun Nikiel set up the insurance goal on a great cross to Darryl Reopel, who flew in for the header.
“The guys are playing great,” Westfield Tech coach Kyle Dulude said. “We are still moving pieces around to see how we can be at our best.”
Westfield Tech center fullback Frank Florek was solid in the second half.
“The guys are having fun,” coach Dulude said. “Hopefully we can extend our season as long as possible.”

FIELD HOCKEY
Rams finish on high note
Southwick 3, Northampton 1
Alex Grimaldi had one goal and one assist, Emily Martin and Gabby Houle each scored once, and Sydney Gorman had an assist in Southwick’s final game of the regular season.
Grimaldi opened up the scoring by getting a touch on a ball fired into the circle by Gorman. Martin scored on a penalty stroke. Houle scored on the third phase of a corner off a quick pass from Grimaldi.
Southwick goalie Clare Stratton finished with three saves.