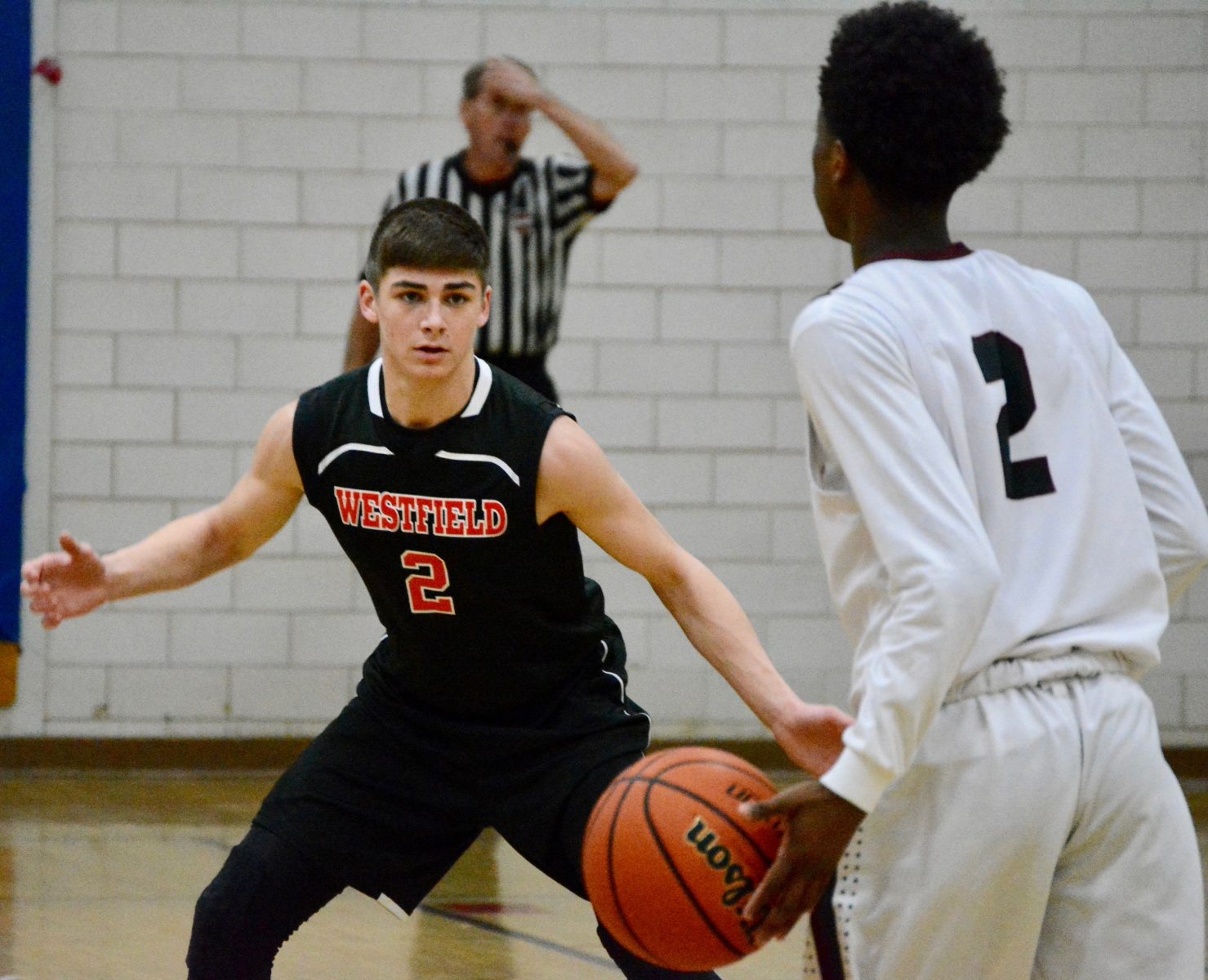 AMHERST – In the harshest of conditions, in one of their most pressure-packed situations, the Westfield High School boys’ basketball team aced one of its toughest tests.
Gabe Piepergerdes made six 3-pointers, scoring 22 points and the Westfield Bombers earned a stunning, postseason-clinching 73-70 win over the Amherst Hurricanes Monday night on the road.
“We shot really well and we pushed the ball really well,” said Piepergerdes. “We didn’t let them get back into it.”
Piepergerdes made three 3-pointers in the final 3:23 of the second quarter, including consecutive shots from beyond the arc – the first from the top of the key; the second from the corner – to give Westfield (10-9) a 36-29 lead. He made another with 1:31 remaining in the half, but it was an ankle-breaking lay-up that he made in the lane a moment later that shook Amherst (15-5) off balance. 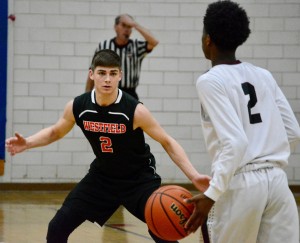 Westfield’s Gabe Piepergerdes, left, settles in on defense as Amherst’s Joyner Jajahn, right, brings the ball up the court. (Photo by Chris Putz)

Rodney Bernard (17 points) made sure Westfield carried momentum into the locker room at the half, beating the buzzer with an aggressive drive to the hoop and laying it in just before the horn sounded. The Bombers led 46-36.
Westfield’s good fortune continued in the second half.
Amherst players, coaches, and fans could only shake their heads when Piepergerdes hit the side of the rim on a baseline three to begin the third quarter, only to have the ball bounce sky high, come down, and rattle in to give Westfield its largest lead of the game, 49-37.
Piepergerdes made another shot from beyond the arc with 4:52 to go in the quarter. Amherst fought back, with rising tempers and mini runs. The Hurricanes sliced their deficit by more than half, pulling to within 54-51 with just under three minutes left in the quarter. A three from Kam Wells (8 points) in the final minute of the quarter increased the Westfield lead to eight, 59-51.
Bernard pushed the lead back to double digits to open the final quarter, but Amherst rallied. Westfield converted just enough key baskets in the closing minutes though to keep from being swept up in the Hurricanes’ wrath.
Ryan Murray (7 points) made a key basket. After Amherst took its first lead on Kyle Murray’s 2-point bucket with 2:31 remaining, Javi Santos (11 points) made a tip-in to reclaim the lead for Westfield, 68-66. Piepergerdes converted his sixth three of the game with 1:10 left to make it 71-66.
Amherst would not go quietly.
With the burgundy and white jerseyed fans screaming at an all-time pitch, Meikkel Murray made consecutive 2-point baskets to pull Amherst within one, 71-70, with just 30 ticks on the game clock.
The two teams exchanged a pair of foul shots in the final 17 seconds. Neither team converted. Piepergerdes made two free throws with 2.7 seconds left. Then, Amherst’s full-court desperation heave clanged off the rafters. Westfield erupted into celebration.
“I took a deep breath,” Westfield coach Josh Balestracci said of the late-game drama. “Our whole team played well. That is a strong team we just beat on the road to get into the playoffs. Our players had to persevere to get through a tough atmosphere.”
For Westfield, winners of four straight and six of their last seven, it is their first tournament appearance under coach Balestracci, and the team’s first in three years.
Said Piepergerdes: “We just found our strengths and we got rid of our weaknesses. We each did our job. We each figured out what we could do well, and we worked together as a team. It just all (came) together at the end of the season.”
The contributions from every player played a key role in determining the outcome for Westfield. Scott Walsh (5 points), Aidan Dunn (3), and others who may not have shown up on the scorebook wore down Amherst players with their relentless effort.
Westfield will close out its regular season slate Tuesday “senior” night at home against East Longmeadow. The Spartans (9-10) are seeking their 10th win of the season to earn a postseason berth. Tip-off is at 7.