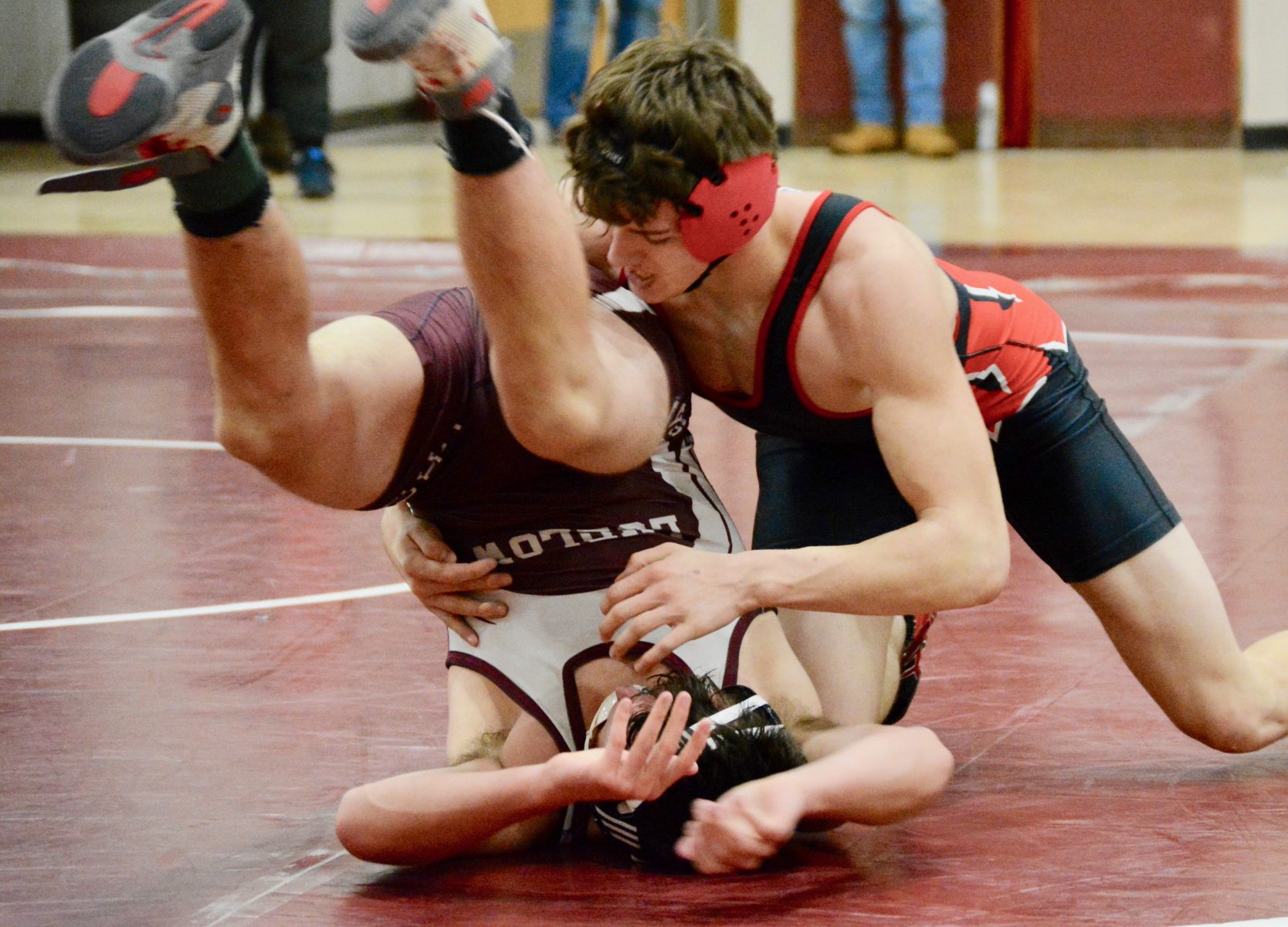 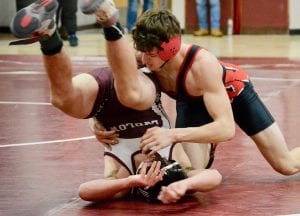 Westfield’s Cam flips Ludlow’s Jayden Giza and the 160-pound match upside down, rallying from a 2-0 deficit en route to a 6-4 overtime win. (Photo by Chris Putz)

“It was an improbable turnaround victory,” coach Malinowski said.
Rodgers was taken down in the first period, put his back to the mat in the second, and just when it looked like the match was over, rolled through to get off his back. Shortly after, he was able to reverse Webb and put him on his back only to have Webb roll through on him.
Rodgers trailed 9-4 early in the third period, but returned Webb to the mat, rotating his hips and putting his opponent to his back, keeping him there for the pin and a 12-point swing.
In their previous meeting, Christian McKenzie pinned Towers in 59 seconds. This time around, McKenzie started strong, nearly putting Towers on his back. Towers fought through and earned a reversal to tie the match. Towers took the lead in the second with a reversal. McKenzie reclaimed the lead in the third, but Towers would not be denied.
Towers scored a takedown in the final seconds, putting McKenzie on his back for a narrow 8-6 win.
Westfield returns to action Saturday at the Chicopee Comprehensive dual meet tournament before squaring off against Longmeadow for the league championship Wednesday.

BOYS BASKETBALL
Tigers roar back to life
Westfield Technical Academy 73, Pathfinder 42
Westfield Tech dominated Pathfinder for a key victory in the postseason chase.
“There was no self-pity,” said Westfield Technical Academy boys basketball head coach Kyle Dulude, whose team suffered a brutal double overtime loss last week. “We just turned the page and made it our mission to just play better and learn from our mistakes.
The win created a two-way tie with Pathfinder in league play. Teams qualify for the postseason by posting a .500 or better record, or by finishing first or second in their respective leagues.
Westfield Tech’s David Tikhonchuk had an outstanding game, leading all scorers with 28 points. Josh Bush netted a double-double with 18 points and 10 rebounds. Nine other Tigers scored, including Dakota Noel, who drained a three-pointer in the fourth quarter.
Noel, a four-year student at Westfield Tech, has been a party of the varsity program in some capacity during his time with the team.
“This year we put him on the roster, did not guarantee him any playing time, but told him if the time was right, he would get his moment,” coach Dulude said. “Dakota comes to practice every day and is a very vocal leader who tries extremely hard,” Dulude said. “Today he made the most of his opportunity in his first varsity minute for the basketball program.”
Noel found his way to the corner and on a cross court pass from Tikhonchuk, squared himself up and knocked down the three. He received a standing ovation.?“It was something special,” coach Dulude said.

Rams get even
Southwick 53, Hampshire 45
Southwick opened with a 17-6 run and closed out a victory with a solid fourth quarter. Dan Scharmann and Cade Billings led the Rams with 15 and 10 points, respectively,
“We played 16 good minutes and 16 poor minutes,” Southwick coach Peter Fiorentino said. “We’re walking out of there with a win so that’s nice.”
With the win, Southwick improved to 6-6.
“It’s very important to get back to .500,” said Fiorentino, whose team is now four wins away from earning a tournament berth. “It’s going to be a battle to get in.”