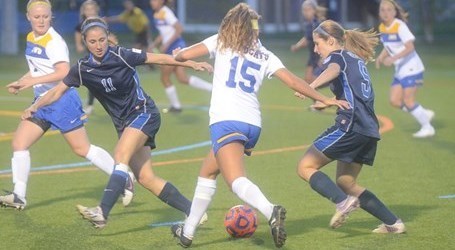 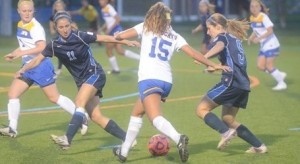 WESTFIELD – Sarah Sypek converted the game-winning goal in the 103rd minute as Westfield State edged Smith College, 1-0 in overtime, in a non-conference women’s soccer match at Alumni Field on Wednesday night.
Sypek scored off of a centering pass from Amanda Grant deep in the left corner. Grant’s pass found Sypek near the left post and she passed the ball into the short side of the net for the winner.
The two teams dueled through a scoreless first half. Smith goalkeeper Shelby Hall came up with several big saves to keep the Owls off the scoreboard. Hall finished with five saves for the Pioneers, which are now 3-2-1 on the season.
Westfield appeared to have the better of the run of play during the second half and the first half of overtime. Smith earned a corner kick early in the second half of overtime, which proved to be the Pioneers most dangerous opportunity of the extra frame.
Sypek had a clear shot from the left side about 10 yards out late in the first overtime that sailed just high.
Anne Stack made three saves for the Owls, who improve to 5-2-1 on the season. Westfield is back in action on Saturday, when the Owls travel to Bridgewater for a MASCAC tilt.