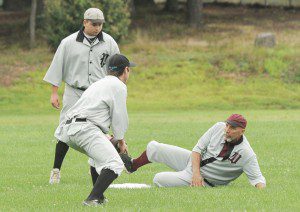 A Westfield Wheelman, right, slides safely under the tag of a Pittsfield Elms second baseman during Saturday’s vintage base ball game at Berkshire Industries. (Photo by Frederick Gore)

WESTFIELD – Five years ago, throngs of people packed into the baseball stadium at Bullens Field for a fun-filled weekend of old-time baseball to watch the Westfield Wheelmen compete in the Vintage Base Ball World Series.
Flash forward to the present day where these dedicated ballplayers, who don old-time gear, follow the sport’s rules of the mid-to-late 1800s, and play in front of a smattering of family members and friends.
The Federation’s World Series having departed after a two-year stint in the Whip City, the sport’s luster has faded a bit over the last few years. But these community members, some of whom were great athletes in the their prime, still continue to play Vintage Base Ball with a passion unseen in even some of the more mainstream sports played in Westfield, and the surrounding areas.
“We do it for the love of the game,” said Westfield Wheelmen team captain Dan “Gunner” Genovese. “We don’t get paid. It’s about the camaraderie of the boys all hanging together.”
Genovese said many of the team’s current players also play in the local over-30 adult softball leagues, but that those leagues do not offer the same type of atmosphere.
“Adult softball is not really family-friendly,” Genovese said. “With Vintage Base Ball, all of the families get together after the game. It’s more of a family event. …Sadly it’s faded away.”
For whatever reason, there has been a decline in interest at attendance in the Whip City. But that does not stop “Gunner” and his team from gunning for the top. 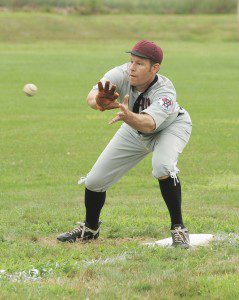 A player for the Westfield Wheelmen covers first base. (Photo by Frederick Gore)

The Westfield Wheelmen, having just completed their regular season, will travel to California to compete in the 2013 World Series, beginning next weekend. The Wheelmen will compete against several teams, including the Santa Clara Stogies and Amador County Crushers, who they last played in the Whip City’s World Series.
The rules for Vintage Base Ball are, for lack of a better word, archaic. But that is just how these players like it.
“It’s a challenge,” Genovese said, “but we love it.”
The rules date all the way back to the 19th century and contain many oddities by current baseball standards. For instance, there is no cat-and-mouse game between the pitcher and hitter stepping off the mound and out of the box, which slows down the game today. Once the pitcher has the ball, it is delivered. If the hitter loses the bat, the pitcher can still fire in strikes.
Another difference is the foul ball.
If a batter hits a foul ball, it counts as nothing – not even a strike one or strike two. Said Genovese: “As a pitcher, you hate that. As a batter, you love it.”
Genovese said one of his favorite Vintage moves is the “hidden-ball trick.”
“It catches players off guard he said,” of the move to nonchalantly hide the ball and catch a player off one of the bases for an out.
The rules may be a bit more “basic,” but fielding the ball (at least from an outsider’s view) appears to be much tougher. Gloves are very small, have no webbing, and offer little to no protection.
“Fielding is a huge challenge,” Genovese said.
The catcher’s glove is not much better, the team’s captain explained. It is similar to a 1920’s fielder’s glove, he said.
Whether the game catches on again with the public, Genovese said the old-time sport with the old-time rules is going to remain number one in his book.
“There is a little bit more requirement of skill with the lack of equipment,” he said. “You’re always trying to perfect yourself.”
For the Wheelmen, it is the “perfect” game. But it is all not just for show for these guys.
“Make no mistake about it,” Genovese said. “We’re going to the World Series in California to win.”
– – –
The current Wheelmen roster is comprised of: Dan “Gunner” Genovese, Ron “Gator” Dumont, Matt “Matches” Avery, Steve “Sizzler” Wingate, Dan “Short Order” Cook, “Jersey” Joe Hepworth, “Pistol” Pete Orzechowski, “Silky” Nick Och, Rich “Weezer” Winiarski, Andre “Andale!” Conde, Phil “The Thrill” Choe, Sean “Ichiro” Ashton, Gary “Bulldog” Stewart, and “Cap Gun” Jared Orzechowski (mascot/batboy).