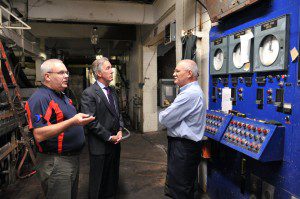 RUSSELL – Texon Financial Controller Thomas W. Humphrey confirmed today that Texon International is leaving Russell.
“It’s an economic decision,” Humphrey said.
Texon International will move its manufacturing that took place in Russell to an existing plant in China. A distribution warehouse in Westfield will now house product for its customers in the United States.
The warehouse will be located out of Lawry Air Freight by Westfield Barnes Regional Airport.
Earlier this year Humphrey and Texon General Manager Mark Reardon, who left the company Nov. 1, met with Congressman Richard Neal to discuss how Texon could survive in Russell. At that time, the men said the cost of energy was prohibitive and they were seeking help from government leaders to secure alternative energy sources.
One such source was burning wood, but stringent laws in town and across the state, prevented that option. Humphrey, however, said that bylaw did not decide the fate of Texon in Russell.
“This has nothing to do with wood burning,” said Humphrey, who also said that burning wood rather than oil was “a way to reduce our costs.”
“I have been here 30 months and my job coming in was to try to make money, and we do,” Humphrey said. “The market is such that Texon International had a flat year and they can make this product in another plant.”
Humphrey emphasized that “Russell had nothing to do with it.”
“The wood burning issue became irrelevant because it was just too expensive,” said Humphrey. “But energy plays a big part in our costs here. We tried to get a gas line up here but that didn’t work.”
Humphrey said in the world of Texon International, the United States plays a small role.
“China is the big player in our business and the Chinese economy went flat in 2012,” he said.
Neal’s staff weighed-in on the issue following confirmation of the move.
“Congressman Neal visited Texon International last March and met with company executives and employees. During that meeting he was told the company was considering moving their operations off-shore if the state did not help reduce their rising energy costs. The Congressman agreed to raise Texon’s concerns directly with the appropriate state officials, which he did on several occasions. Unfortunately, Texon and the state could not come to an agreement. He is very disappointed that the company and the 35 manufacturing jobs are leaving Russell,” said William Tranghese, spokesperson for Neal.
Texon International has manufacturing plants in Russell, Germany, and China. Humphrey said employees were told of the closing last month and since then, they have been his priority.
“The 35 people who work here will have their last day Dec. 21,” he said. “On Nov. 16 I talked to them and they told me what they wanted – and they wanted to work longer hours until we close, and we are.”
Humphrey and Customer Service Manager Sue Mitchell are the only two employees who will transfer to the distribution center. Humphrey said Texon has done everything it can to assist with the transition for those who will lose their jobs.
“We had Rapid Response here talking to them about unemployment and benefits right away,” said Humphrey. “And, they will get training.”
Texon International is giving everyone a severance package, including next year’s paid vacation, and employees can continue their health benefits through a state connector program.
“It’s based on income so some will have reduced costs for health insurance and some may not have to pay at all,” Humphrey said.
Texon’s Russell plant was the birthplace of the cellulose insole for shoes. Today, those insoles are produced in Russell and in Germany and are used in the world’s biggest name shoes, from Nine West to Nike to Timberland. The Russell plant also produced the paperboard pine trees used for those famous scented car fresheners, as well as the historically fashionable Levi Strauss jeans label. Texon also makes the board inserts for Coach and other purses. Humphrey said all products, with the exception of the air fresheners, will continue to be manufactured by Texon.
Texon opened its doors in Russell in 1960 and has boasted longevity from its loyal employees. Humphrey said many of those being laid off this month have been with Texon 25 years.
“This place has been here a long time and provided good jobs and it served its purpose for many years,” said Humphrey, adding that Texon International tried to keep the Russell plant open but it was not cost effective any longer.
Humphrey said he will oversee the transition to the distribution warehouse and is seeking a buyer for the Russell property. A third party will help dismantle the giant machines used in the production of Texon’s paper products. The machines, which are 100-feet long, will likely be sold for spare parts.
“First and foremost we want to take care of employees,” said Humphrey.