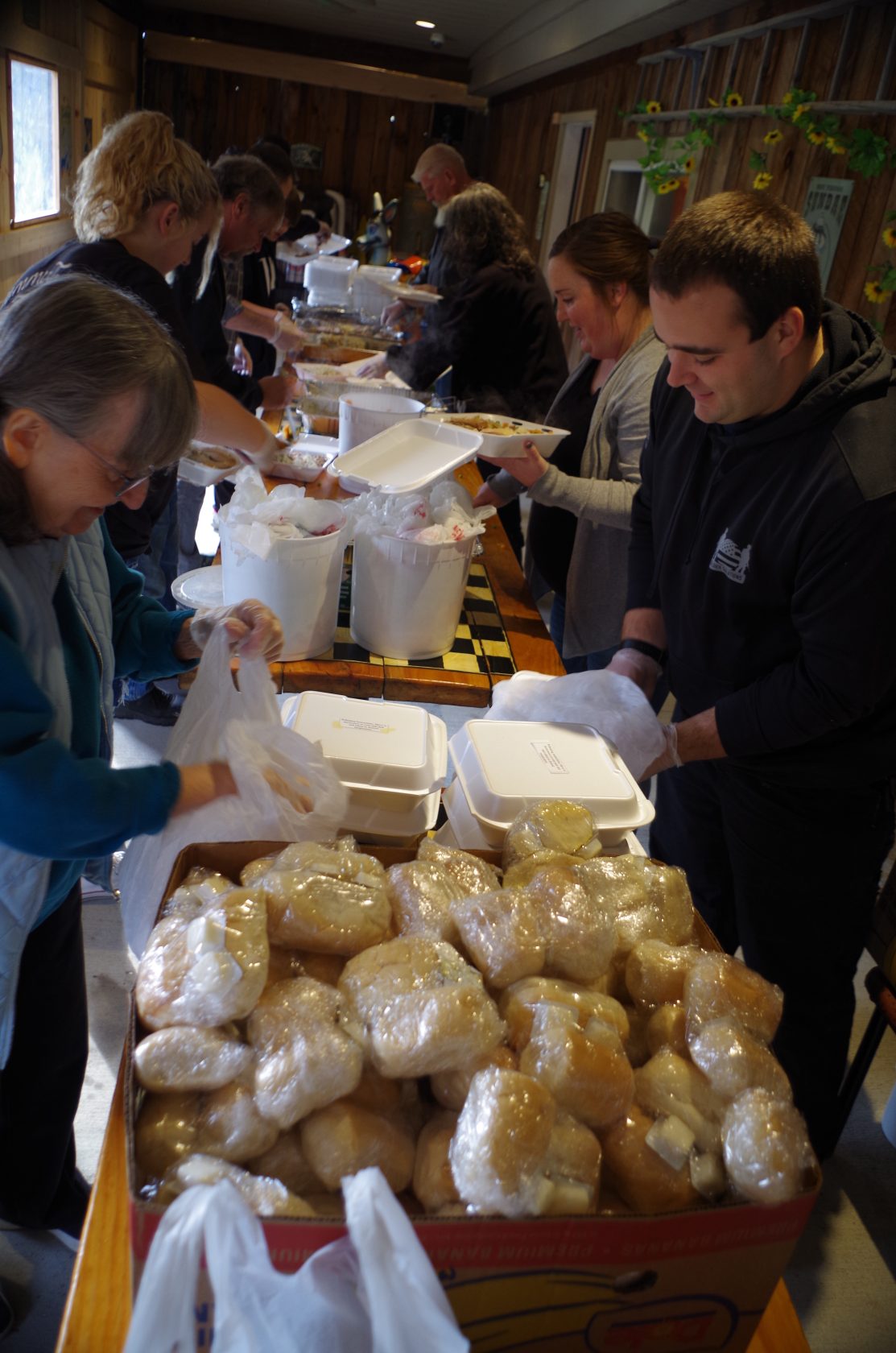 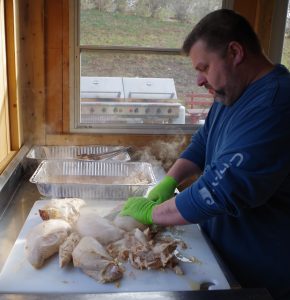 SOUTHWICK — Think your kitchen was madness on Thanksgiving morning?

Try cooking 20 turkeys, 200 pounds of potatoes, eight giant trays of stuffing, 200 slices of pie. And then packing it all up and delivering to dozens of homes across Southwick, Granville and Tolland.

You can do it if you’re the Southwick Civic Fund — but of course, you’ll have a little help.

Moolicious Farm, closed for the season, was buzzing with activity on Thursday morning as Joseph Deedy and about two dozen volunteers cooked nearly 200 Thanksgiving dinners. Deedy, the proprietor of Moolicious and founder of the nonprofit Civic Fund, said providing meals for those who would otherwise miss the holiday tradition has become a tradition in itself for his family and the other volunteers. 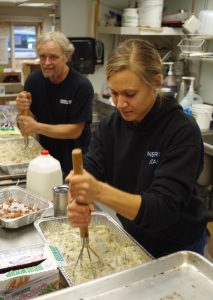 One of the volunteers, Gayle Lamon, said she was at Moolicious at 8 a.m. to start putting together the meals. She said it’s important to give back to the community, and she, her husband and her 12-year-old son all volunteered to make it part of their family Thanksgiving.

“Joe asked for some help, and we decided we wanted to volunteer,” she said.

James Grannells said his work started with preparing the turkeys on Tuesday and cooking them, along with fellow volunteer Kelly Magni, on Wednesday night. Grannells was hard at work on Thanksgiving morning slicing pound after pound of white and dark meat. 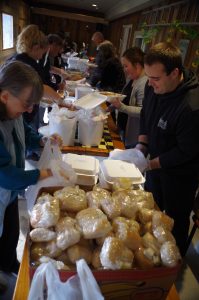 It’s all hands on deck as Southwick Civic Fund volunteers assemble Thanksgiving dinners to be delivered to seniors and families in town. (MICHAEL BALLWAY/THE WESTFIELD NEWS)

After finishing his work for the Civic Fund, he had a bit of a break from the kitchen — he said he was traveling to his sister’s house for Thanksgiving, so he wouldn’t have to do any more cooking. But since he and his family enjoy turkey leftovers, he still plans to cook his own Thanksgiving feast at home on Saturday. That will be bird No. 21 for this week.

Deedy, who is also a longtime Select Board member in town, said he started the Thanksgiving meal project nine years ago.

“None of us wanted to go to the in-laws’ that year,” he joked.

Having built his ice cream stand and restaurant on Feeding Hills Road, Deedy wondered if he could put the new kitchen to use on Thanksgiving, and “see if there’s a need.” 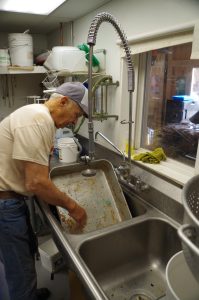 Our Community Food Pantry also delivers Thanksgiving meals to its clients in Southwick, Granville and Tolland. Deedy said the pantry does great work, but the two Thanksgiving operations tend to serve different populations.

When he first started the Thanksgiving meals, Deedy expected the greatest need would be among low-income households. Over time, he grew to realize that most of the people who need a Thanksgiving meal from the Civic Fund are senior citizens — those who can’t leave the home, or those who live alone and won’t be spending the holiday with relatives, making it wasteful and expensive to cook an entire turkey dinner for themselves. 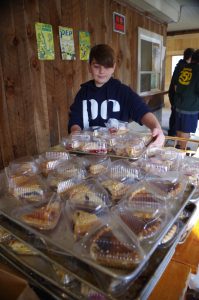 Many of his volunteers are family members, and several come back year after year. The knowledge that builds up — what worked, what didn’t — makes the morning run very smoothly, he said.

For example, Deedy said, one year the group realized that home deliveries were taking longer than expected. In preparing their schedules, they hadn’t accounted for the time that drivers spend chatting with the recipients of the meals — for those who live alone, possibly the closest thing they would have to Thanksgiving table conversation that day. He cut down on the number of homes each driver is assigned. That means more drivers are needed, but finding volunteers has never been a problem. There’s even a waiting list, he said.

“It’s a great crew of volunteers,” he said.

The cooks, packagers and drivers are all volunteers. Foods are purchased by the Civic Fund or donated by local businesses and farms. This year’s turkeys were donated by Southwick Community Episcopal Church; other food items came from Industrial Boiler of Holyoke, whose owners are Southwick residents; Tucker’s Restaurant; Calabrese Farms; Swaz Potatoes; and countless individuals, Deedy said. As Thanksgiving approaches, some folks just leave their donations outside the door to Moolicious. 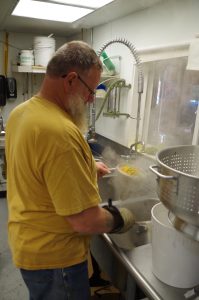 “You walk out every morning, there’s another box of something out here,” Deedy said.

Each year, meal recipients sign up at the Southwick Senior Center, and can choose to pick up their free meal on Thanksgiving at Moolicious — they take it home to re-heat it — or to have it delivered. Deedy said the numbers are about evenly split, with about 80 deliveries scheduled this year, and about 85 pickups.

Up next for the Southwick Civic Fund is a tree-lighting ceremony on Dec. 11 at Town Hall. The ceremony is a family event, including a visit from Santa Claus, s’mores roast, high school band performance, craft fair and free gifts for youngsters. The Civic Fund is happy to accept monetary donations and toys, and invites businesses and groups to sponsor and decorate a tree for the display. For more information, visit southwickcivicfund.org/winter-forest-craft-fair, or call 413-569-1700. 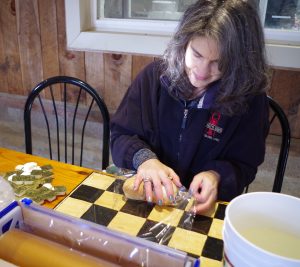 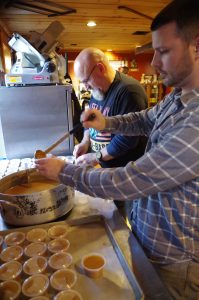 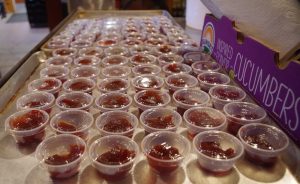 Servings of cranberry sauce are sealed and ready to be packed. (MICHAEL BALLWAY/THE WESTFIELD NEWS)