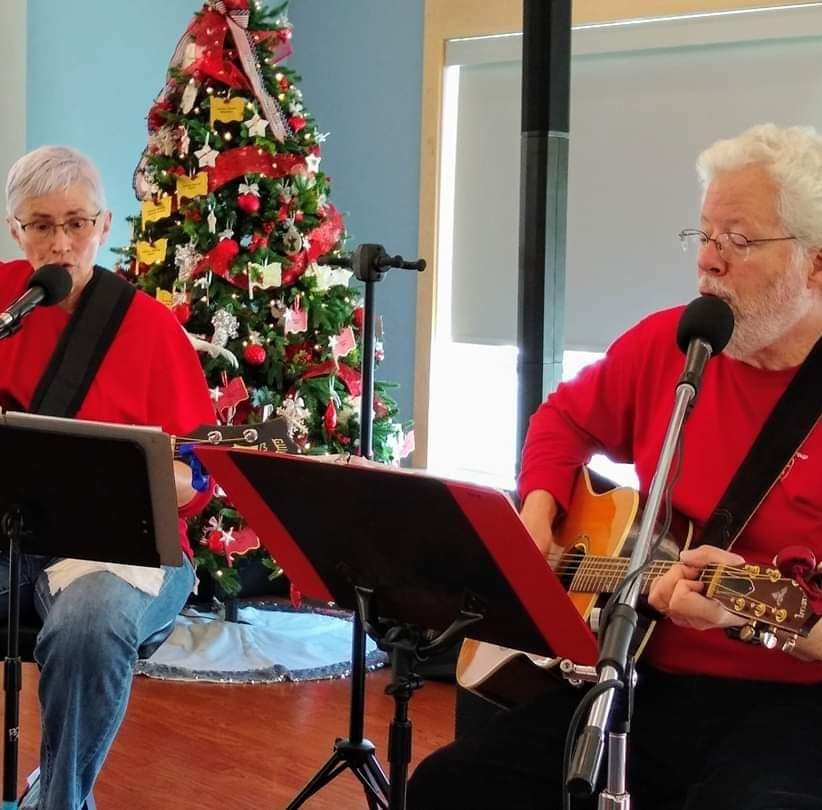 WESTFIELD-Acoustic duo Marion Dunk and Chip Arnold of The Keepers are sharing their joy of music with city residents this month as they present a holiday concert on Westfield’s community cable Channel 15.

“We selected some of our favorite Christmas and holiday songs, a couple of original tunes, a standard or two, and some traditional hymns,” said Dunk of Westfield. “There are so many to choose from; we hope the audience enjoys what we chose.” 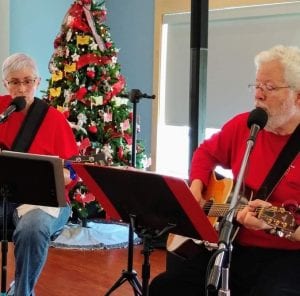 “We performed a mix of religious and secular tunes,” said Arnold, noting viewers will hear a variety of songs including “Jingle Bells,” “Jingle Bell Rock,” “Blue Christmas,” and “Silver Bells,” as well as “Silent Night,” “God Rest Ye Merry Gentlemen,” “I’ll Be Home for Christmas,” “Joy to the World,” and “Santa Baby.”

The performance will also feature original tunes including Dunk’s “The Star” and Arnold’s “Christ in Christmas.” Both songs are featured on The Back Row Band’s Christmas CD “Christmas Grace.”

The duo first performed together in a church group known as The Back Row Band for several years. Additionally, Arnold had a blues band, The Terraplanes, and Dunk had sung backup for a tune on the group’s CD in 2000-2001.

“A few years later, we ran into each other at a Stearns Square concert, think it was Delbert McClinton, and realized we both had a passion for several of the same artists,” said Arnold. “Not long after, I was looking for a bass player and wanted to add more vocals to the music I was playing. Marion and I decided to work together, outside of the church group, on an experimental basis, and the experiment quickly grew into a solid partnership, which has lasted since 2005.”

“As the door to The Terraplanes closed, the door to The Keepers opened, and it has been a wonderful 15+ years,” said Dunk. “It is always a pleasure to engage in ‘music therapy’ with Chip, my partner in musical crimes and rhymes.”

The duo said they were “honored” to have been selected again to prepare this holiday offering for the seniors in Westfield.

“We recorded a set of ‘oldies’ earlier this year on Channel 15 for a sock hop style event,” said Arnold, noting the lunchtime event was conducted in conjunction with the Westfield Council on Aging.

“This is the second concert we have recorded for Channel 15,” said Dunk, adding, “and I offer a big thank you to Jay, Pete and Ken at Studio 120 at the Westfield Technical Academy for their expert technical assistance. They are a valuable resource to the cultural offerings in Westfield.”

While in-person concerts were put on hold for most of the year for the duo due to the COVID-19 pandemic, they both feel “blessed” whenever they are asked to perform for an audience.

“These shows were recorded live in the studio, with all the little human glitches and interplay we bring to an in-person performance,” said Arnold. “These two recorded opportunities gave us a chance to play for the folks in Westfield, in a live setting, even though we can’t perform in person.”

“I believe the presentation is about 45 minutes, though I didn’t time it,” she said, adding, “I was having too much fun to look at the clock.”

“We feed our souls with our music, and this is as close as we can get to playing for folks, other than the few outdoor venues we played since the shutdown,” he said.

For persons with internet service, you can also see the holiday concert by visiting www.cityofwestfield.org and under “Community,” click on Community Access TV, CH 15 Live Stream.

“It is an eclectic mix of songs, something for everyone we hope,” said Dunk.