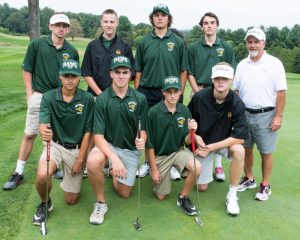 CHICOPEE – Earlier this season, Southwick-Tolland Regional High School golf coach Al Selden reached a milestone 100th victory. If that wasn’t enough, the Rams etched another historic chapter in their storybook season.
On Wednesday, Southwick steamrolled another opponent – this time it was Chicopee 24-0 – to remain perfect at 16-0, and in the process improved to 9-0 in the Suburban East league to clinch a league title.
It is the third straight year that Southwick has claimed a league championship. The Rams are currently in the midst of a league win streak of 38-0 that spans more than three years.
James Longhi who has been out front of Western Mass golfers all year, led the pack again with a round of 39 at Chicopee Country Club. Nick Kavrakis shot a 40, Chris Baker and Matt Garrity each finished with a 42, and Jack Fairley and Brad Durand had 43 apiece.
Southwick will look to extend its dominance Thursday against Belchertown at The Ranch. Tee time is at 3 p.m.

LATE RESULTS – Tues., Oct. 3
BOYS’ CROSS COUNTRY
Southwick-Tolland 28, Smith Vocational 28; Southwick-Tolland 15, Westfield Technical Academy 43
Southwick-Tolland rose to the occasion on “Senior Night” Tuesday with one last chance to shine.
Rams’ Bill Carroll made his last trek around the Southwick course, and it proved to be well worth the wait as he set a course record of 17:33 en route to winning the race.
The excitement continued when Southwick’s sixth man, senior Jake Grilli secured a tie-breaker against Smith Voke.
Southwick will next turn its attention to a tough matchup with league-leaders, Pope Francis, at Whiting Reservoir.

GIRLS’ CROSS COUNTRY
Southwick-Tolland 15, Smith Vocational 50
Southwick turned in one of its strongest team performances of the season thus far.
Gabriela Peterson took home a course record of her own in 20:33 over the 5k course, taking home her second win in four days.
Southwick placed nine runners in the top 10. Seniors Maggie Drohen and Kamryn McCorison made an impact for the Rams in their final trip over the home course.