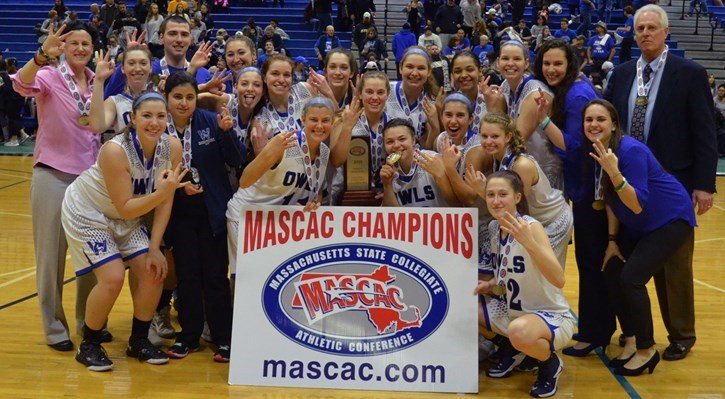 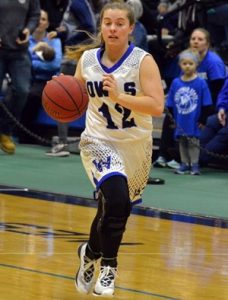 WESTFIELD – Top-seeded Westfield State University women’s basketball completed the three-peat, defeating Framingham State 90-75 behind 15 points and seven rebounds from Tournament MVP Kierra McCarthy in the 2018 Massachusetts State Collegiate Athletic Conference women’s basketball championship game at the Woodward Center on Saturday afternoon.
Westfield earns its fifth MASCAC tournament title (and third straight, defeating Framingham in all three title games from 2015-17) and the Owls will receive their sixth NCAA Tournament bid, and their third straight.
“It’s unbelievable” said Westfield State head coach Andrea Bertini. “It’s so hard to do, I don’t even know how to put words around it. You have to work together, have the right kids, the right team mentality, all pull for each other and care about each other. No matter what’s happening on the floor, whether it’s good or bad, they’re picking each other up and ready to go right back in and try to do better every possession.” 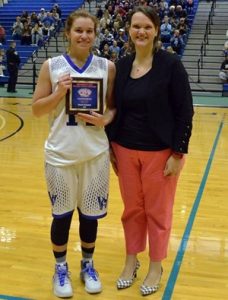 “This is so awesome… it’s just so special,” said McCarthy. “We don’t have just one go-to player. We did it together. They can’t stop just one of us, they have to stop all of us.”
Westfield State (19-7) receives the MASCAC’s automatic bid to the NCAA tournament. The pairings will be announced on Monday at 2:30 p.m. with a live selection show at NCAA.com.
“We can play on Mars . . . we don’t care . . . send the game to Mars,” said Bertini if she asked where the Owls drew in the NCAA tournament.
After a tight game for the first six and a half minutes, Framingham took a 15-14 lead. A layup from the Owls’ Lucy Barrett, and back to back three-pointers from McCarthy and Barrett stretched the Westfield lead out to seven points.
The Owls took a 47-39 lead into the locker room at halftime after an intense first half in front of a vocal, near-capacity crowd of 890.
McCarthy scored 11 of her 15 points, including three three-pointers to spark the Owls fast start.
“I actually wasn’t expecting it at all,” said McCarthy of the award. – Courtesy of Westfield State University Sports