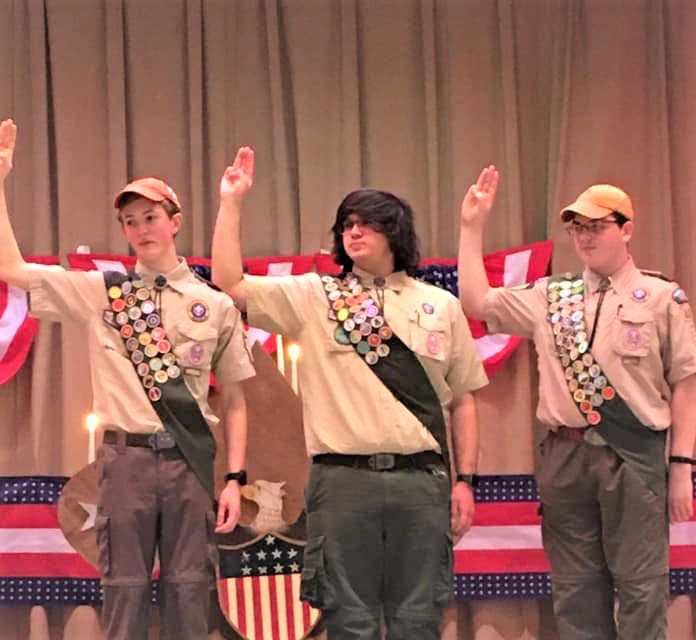 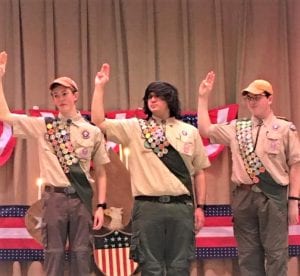 Alexander M. Gaugh, Aaron C. M. Muldrew and Antonio F. Horta-Lent received their Eagle pins during a ceremony attended by family, friends, and the scouting community Jan. 25 at Our Lady of the Blessed Sacrament.

Muldrew, 17, is the son of Chris and Ginny Muldrew and younger sibling of Stephanie.

Muldrew was first introduced to scouting in 2008 as a Bobcat in Cub Scouts in Pack 110 at Highland Elementary School. Over the years, he worked his way through the ranks of Tiger, Wolf, Bear, and Webelos.

Muldrew said the Pinewood and Yukon derbies were among his favorite memories, as well as an overnight trip to Mystic Aquarium. In fifth grade, he earned Cub Scouts’ highest award, the Arrow of Light. In 2013, he crossed over to Troop 821 and started on his journey through Boy Scouts where camping trips became his favorite activity. He also held multiple leadership positions in the troop.

Muldrew embarked on his Eagle project, designing and implementing an outdoor reading area for Westfield Athenaeum’s Children’s Library, with his Eagle Project Coach and Assistant Scout Master Heidi Trottier. Muldrews is the third Eagle Scout in his family.

In addition to scouting activities, Muldrew plays French horn and trumpet in the Westfield High School Band and is one of this year’s Drum Majors. He also runs cross country, indoor track, and outdoor track and is a captain for all three teams. A senior at Westfield High, Muldrew is currently applying to college, hoping to study and eventually pursue a career in engineering.

Gaugh, 17, is the oldest of Jodie and Michael Gaugh’s four children. He joined Cub Scouts as a Webelo at Southampton Road Elementary School and, like his fellow scouts, enjoyed the Pinewood Derby, Fishing Derby and overnight trip to the Springfield Science Museum.

He achieved the Arrow of Light in 2013 before crossing over to Boy Scout Troop 821.

Gaugh said he loves being part of the troop, “going on every campout possible, seizing every opportunity to try new things and go on exciting adventures.”

Under the guidance of Eagle Project Coach Joe Muto, Gaugh created a chicken coop for the Westfield Animal Shelter for his Eagle Project.

A senior at Westfield High School, Gaugh has participated in several drama club productions and swims with the Rapids team at the Westfield Boys and Girls Club. He hopes to pursue a career in environmental science.

Horta-Lent, 18, is the son of Rebecca and Jose Horta and younger brother of Terra. He joined the scouts in 2011 as a Webelo and earned his Arrow of Light. Horta-Lent joined Troop 821, enjoying his first campout at Ski Blandford.

Horta-Lent held numerous leadership positions within the troop and plans to remain with the Boy Scouts as an assistant scout master.

Horta-Lent attends Holyoke Community College and is working toward a degree in chemistry, with plans to transfer to the University of Maine. Horta-Lent’s long-term goal is to become a forensic pathologist.