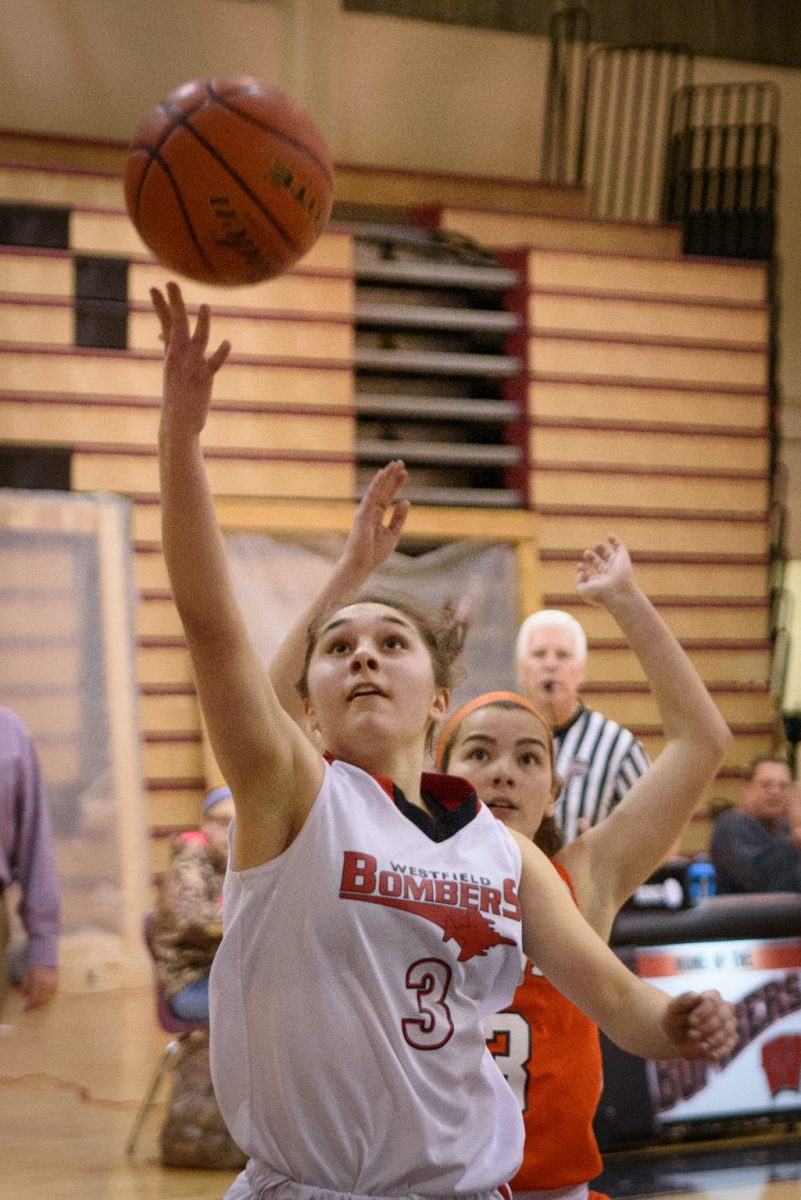 WESTFIELD – Oh my!
The Westfield High School girls’ basketball team may have started out slowly in the 2016-17 regular season, but they sure are making up for it with a sensational second half.
Since a 30-point shellacking at the hands of the Minnechaug Falcons on January 23, Westfield swept the Ludlow Lions, upset Minnechaug, bravely fought the East Longmeadow Spartans (twice), and had a loss to the Agawam Brownies overturned recently due to illegal players (two Agawam players exceeded the limit of playing time in a single night).
That’s not all. 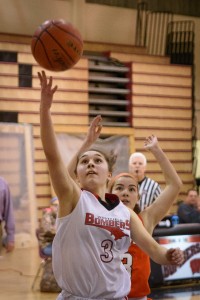 Westfield’s Olivia Hadla lets a lay-up fly before an Agawam player can react to the play Thursday night. (Photo by Marc St. Onge)

On Thursday night, Westfield and Agawam delivered a classic in the Whip City with the Brownies escaping with a thrilling 46-45 win.
Although it was senior night, it was an underclassman that stole the show for the home team.
Westfield freshman Olivia Hadla led all scorers with 28 points. Hadla made five 3-pointers, four of which came in the fourth quarter.
“It was an amazing game,” Hadla said. “I just wish we could have won it for the seniors. …We played our hearts out.”
Westfield delivered a stellar first half of basketball.
The first quarter was a defensive struggle all-around, the highlight being a 6-0 run by each team. Westfield caught fire in the second quarter.
While Westfield was not rewarded for its energy early on, the Bombers’ aggressive nature on offense and cool confidence soon paid off.
In the second quarter, Westfield drove to the hoop and routinely went to the foul line. The Bombers converted six-of-seven free throws, and made a total of 11-of-13 in the first half.
Hadla completed a 6-0 run with a steal and breakaway with about five minutes remaining in the opening half. With just under three minute lefts in the half, she made an and-one to cap a 7-0 run and help Westfield take a 22-13 lead.
Agawam failed to pack its bags though, closing on a 10-3 run to pull within two points at the half, 25-23.
Westfield sputtered out of the halftime break, but managed to keep the game close despite scoring just four points in the third quarter. The Bombers fell behind by six points early in the fourth quarter but Hadla tied it at 35-all with consecutive 3’s.
The lead teetered back and forth in the closing minutes. A key putback from senior Katie Knapik tied the game at 39-39 with about three minutes left.
A layup from Madison Lockwood (14 points) put Agawam back in front by two. A free throw from Bianca Culhane with 2:12 on the clock made it 43-39. Hadla responded with back-to-back 3’s, the first coming with 1:38 remaining, and the second with 1:11 left t0 send the home crowd into a frenzy.
Caitlin Normoyle (16 points) hit a free throw to pull Agawam within one with 38.5 ticks remaining, 45-44.
Westfield turned the ball over in the front court on its next possession. Agawam pushed the ball up the court. Normoyle drove baseline and kissed the ball off the glass to put the Brownies ahead with just a few seconds remaining, 46-45.
Hadla raced the ball up the court for Westfield, went up for what easily could have been the game-winner but the ball was knocked out of bounds. A mix-up on the ensuing inbounds pass for the Bombers resulted in time running out.
“This has been a good group,” Westfield coach Meghan Lavner said. “It’s been about our players getting to know where other people are going (on the court). Against Minnechaug and Agawam, they showed huge maturity. …This was not the best way to end our season but it’s really not the end. For most of these players, though, they’re going to be ready to go next year.”
Westfield closes out its season with an independent contest on the road at Greenfield next Wednesday night at 7.