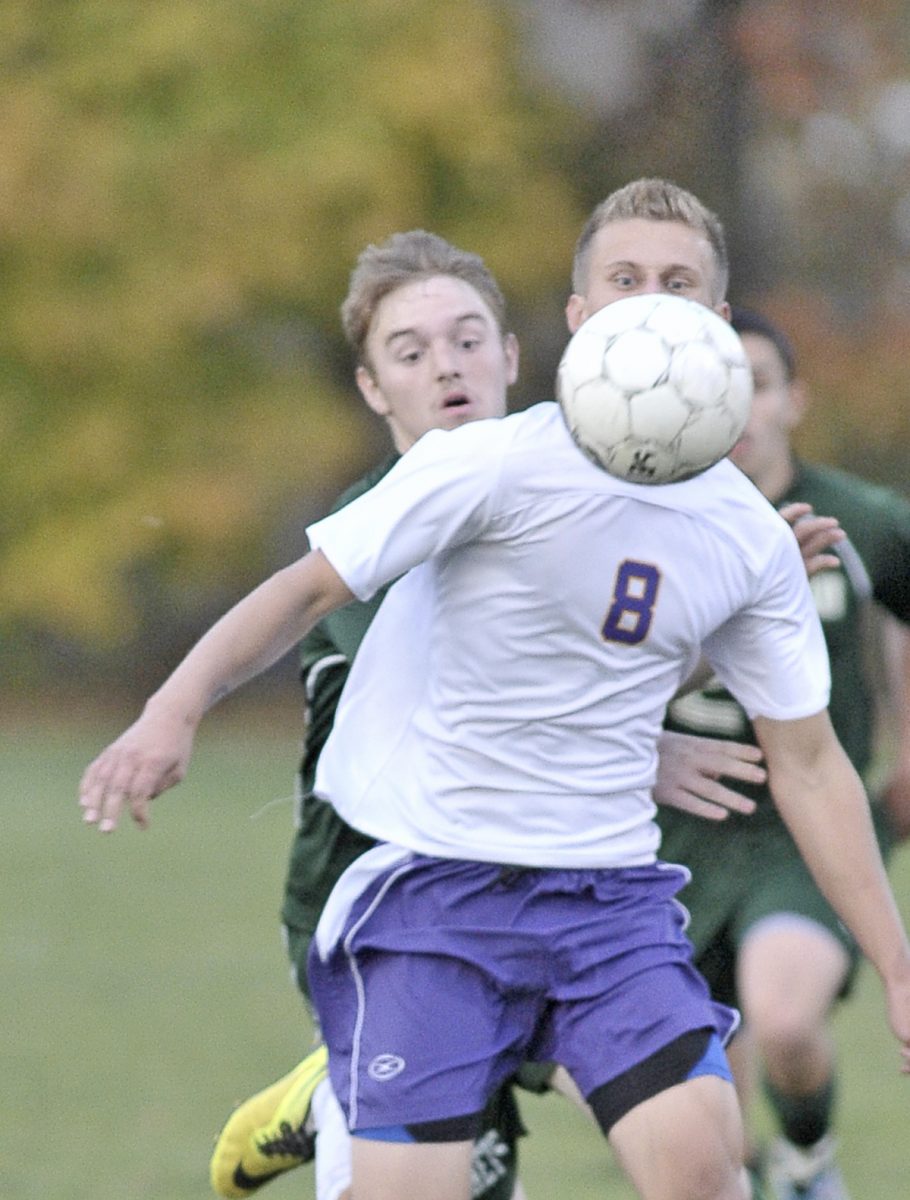 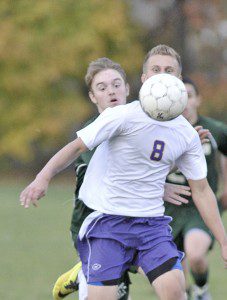 WESTFIELD- In an intense rematch of last Friday’s penalty kick game, the Westfield Vocational-Technical Tigers faced up against the McCann Tech Hornets Tuesday night in a Western Mass Division 4 boys’ soccer opening round tournament game at Bullens Field.
Voc-Tech prevailed 1-0.
Because McCann was Voc-Tech’s only loss this season, there was something more than playoff spirit keeping the Tigers focused Tuesday.
Coach Kyle Dulude said that shortly before the game his team watched an ESPN video of Lauren Hill, an inspirational college basketball player who was recently diagnosed with a brain tumor, and given only months to live.
“It was a different preparation,” coach Dulude said. “We all wrote 22 on our uniforms or hands, because we appreciate life. Some team everyday loses. We lost last Friday, and it could have been us today. So we came out with a positive stress free attitude of let’s just enjoy life and see what happens”.
First-year junior Vitaliy Tereschuk tallied the team’s only goal early in the second half, following a scoreless first half. Tereschuk managed to get his foot on the ball for the score in the midst of a scrum out in front of the McCann net.
“I’m very happy for Tereschuk,” coach Dulude said. “He’s one of the kids that shows up every day and works hard. When your second string goes in and comes through, you can’t be any happier than that.”
McCann outshot Voc-Tech 15 -11 but Tigers’ goalkeeper Vitaly Covileac kept the ball out of the net.
“You need a strong goalie in the playoffs,” Dulude said. “Covileac didn’t have too many blasts or breakaways to stop, but he controlled the pace.”
Last week, McCann Tech defeated Westfield Voc-Tech in the state small vocational schools championship game in a shootout, 1-0.
Voc-Tech moves on to play No. 4 Smith Academy Friday at 2 p.m.

Lee rallies past Saints
No. 8 Lee 3, No. 9 St. Mary 2 (OT)
Eighth-seeded Lee rallied for three unanswered goals – two in the second half and one eight seconds into overtime – to avoid a mild upset at home.
Nick Pow delivered one of three assists on the final score, a quick goal from Jon Rodrigues just a few seconds into OT.
Joey Collins had one goal and one assist for St. Mary, Seamus Butler scored a goal, and Alex Parentella had an assist.
Saints’ goalie Colin Blake finished with eight saves.
“We came out and played hard in the first 10-15 minutes, and finally scored,” St. Mary coach Andrew Martin said. “In the second half, (Lee) really stepped it up and took it to us.”
St. Mary finished the season with an overall record of 13-5-1, the second best in the head coach’s career.
“It was a great season for us,” coach Martin said. “Northing to be ashamed of and very proud and happy for the season we had.” – Chris Putz contributed to this report