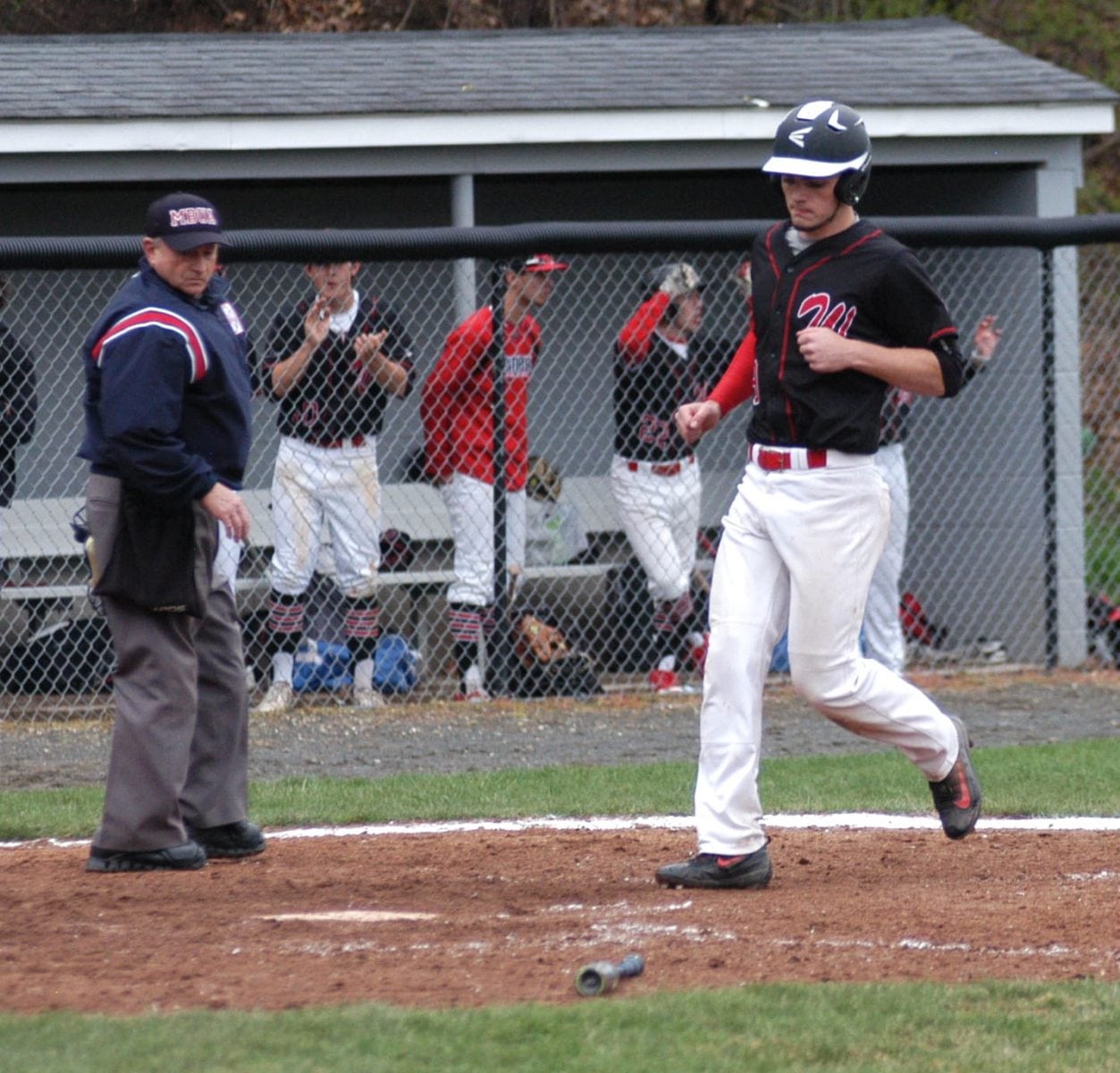 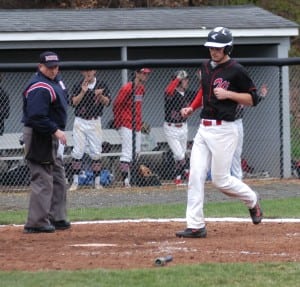 Westfield’s Austin St. Pierre scores a run for the Bombers in the fourth inning Wednesday at Longmeadow High. (Photo by Jeff Hanouille)

By JEFF HANOUILLE
Staff Writer
LONGMEADOW – Powered by a three-run uprising in the fourth inning that broke a 2-2 tie, the Westfield High School baseball team defeated Longmeadow on Wednesday, 5-3, to up its record to 5-5 on the season. The loss, the Lancers sixth in a row, drops them to 3-6.
The Bombers, who are halfway through a stretch of four consecutive away games, will close out the week at East Longmeadow on Friday before traveling to Pittsfield on Monday.
All three of Westfield’s runs in the fourth inning came with two outs, as Aidan Dunn, Austin St. Pierre (2 for 4, two runs, two stolen bases) and Matt Hastings went back-to-back-to-back with base hits – with Hastings’ single plating Dunn to give the Bombers a 3-2 lead. Sean Murphy (2 for 4), the sixth batter of the inning, was able to work himself into a 3-1 count against Longmeadow southpaw Matt Walthouse before he delivered a bases-clearing triple that scored St. Pierre and Hastings and gave Westfield a commanding 5-2 lead. 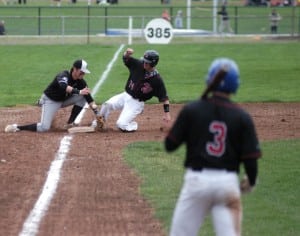 Westfield’s Sean Moorhouse slides safely into third as the ball pops up and away from Longmeadow’s Nick Erwin. (Photo by Jeff Hanouille)

The Lancers added a run in the fifth inning to cut the lead to 5-3, but Westfield reliever Stefan Krol was able to strike out Longmeadow’s Aniello Russo looking with runners on first and second to stop the would-be rally and preserve the Bomber lead.
After stranding a runner on third base in the sixth inning, Krol worked himself out of another jam in the seventh with the tying runs on first and second base and nobody out. Following an unsuccessful sacrifice bunt attempt by Longmeadow’s Daniel McLaughlin that resulted in Westfield catcher J.D. Huntley throwing to third base for the force out, Krol was able to induce a fly out to right field for the second out and a ground ball to short for the game’s final out.
Krol, who pitched 2 1-3 innings of relief, did not allow a hit or run. He walked two, hit one and struck out two.
Westfield starter Ari Schwartz, who earned the win, went 4 2-3 innings and gave up three runs on six hits and three walks. He struck out five. Walthouse, who allowed five runs on seven hits and four walks despite fanning nine, was saddled with the loss.