WESTFIELD – The defending champs are going back to Cali … with another title.
Tri Valley (California) rallied past Bismarck (North Dakota) 9-6 in the Babe Ruth Baseball 14-Year-Old World Series championship game Thursday night at Bullens Field for its second straight Babe Ruth title.
Several of the current players hail from that 13-year-old championship squad.
“You dream about this stuff,” said World Series Most Outstanding Player and tournament batting champion Michael O’Hara, Tri-Valley’s lead-off hitter. “We’ve been on this road before but nothing – no words – can explain what we’re feeling, what it’s like to repeat like we have.
O’Hara was involved in one of the championship game’s defining moments when he collided with Bismarck starting pitcher Connor Hanson in a play at the plate late in the game. Hanson, who continued to get stronger throughout the game, was knocked from the game.
After that play, Tri Valley rallied. The rest is history.
Bismarck proved to a rather strong foe. 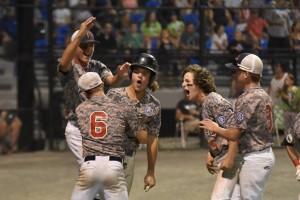 North Dakota’s squad wasted no time in going after Tri Valley. Skyler Riedenger jumped on top of Tri Valley pitcher Jaden Sheppard’s opening pitch, driving a liner to left field.
Darin Nolz hit into a fielder’s choice, advanced to second base on an errant pickoff attempt at first base. Sheppard quickly bounced back though, forcing a ground out, strikeout, and fly out to end the Bismarck threat.
Tri Valley lead-off hitter Michael O’Hara beat out a high hopper just beyond the first base bag. After Joey Battilega hit into a fielder’s choice, Bismarck pitcher Connor Hanson walked Jack Grant. Another fielder’s choice left runners at the corners. Golden drew a two-out walk to load the bases, but Hanson forced a ground out to keep the game scoreless.
Tri Valley threatened again in the second.
With two outs, Max Masajlo and O’Hara hit back-to-back singles. Battilega followed with a booming two-run double to left-center field to put Tri Valley out front 2-0.
Bismarck got its first runner of the third inning on when No. 9 hitter Mason Leingang beat out an infield hit with no outs. A one-out Nolz sac bunt moved Leingang to second. Cade Feeney singled up the middle to put runners on the corners. Feeney stole second base uncontested. A towering double from Hanson – a little bit of déjà vu – nearly in the same exact area as Battilega’s one earlier had Tri Valley seeing red, resulting in two Bismarck runs for a 2-all tie.
Tri Valley reclaimed the lead in the bottom of the third. Grant singled. Thomas Gavello reached on a hit-by-pitch. With two outs, Cory Steinhauer drove a hard ground ball through the right side of the infield to take a 3-2 advantage. A Josh Anderson walk loaded the bases. Hanson recovered in time to strike out the next batter to end the inning.
Bismarck threatened in the fourth.
With one out, Cameron Miller collected a base hit for Bismarck. With two outs, Cody Sorenson singled and Leingang walked. Riedinger delivered a hit through the left side that resulted in a game-tying run. An infield single deep in the hole on the right side that Tri Valley initially appeared to field for the final out at first, resulted in a “safe” call from the officials, two more runs and a 5-3 lead. Feeney smacked a single to center field to make it 6-3, running Sheppard from the game.
Tri Valley attempted to bounce back in the fourth inning, but ran into the teeth of Bismarck’s defense each time.
O’Hara walked to begin the fourth, but Battilega hit into a double play. Grant doubled and Gavello singled, but Bismarck’s shortstop made a diving stop toward the second base bag and flipped to the second baseman for a spectacular – and very close – out. The call drew the ire of Tri Valley’s coaching staff, who vehemently disputed the snap judgment.
As the game wore on, Bismarck continued its relentless offensive charge. Bismarck chased Tri Valley pitcher Evan Chevalier with consecutive singles from Welkum and Sorenson. Leingang drew a 2-0 count before Tri Valley pulled Chevalier, who a short time before was drilled on his foot by a line drive.
Hanson continued his grueling effort – and even dare say – fifth-inning mastery. The Bismarck pitcher retired the side.

Bismarck fed off its starting pitcher’s success, loading the bases in the top of the sixth with singles from Riedinger, Nolz, and Feeney. Tri Valley kept its hopes alive with a 4-6-3 double play.
O’Hara and Battilega reached base on one-out singles in the bottom half of the inning to help fuel a Tri Valley rally. They both advanced on a wild pitch. A walk and successful steal of home plate – a brutal collision with the base-runner, O’Hara, forced Hanson from the game – and made it 6-4.
“The ball got away from the catcher, and I was coming home,” O’Hara said in describing the play at the plate. “I didn’t think he was going to throw it so I didn’t get down. The pitcher just happened to be there. I would never mean to hurt him.”
O’Hara said he became entangled with the catcher, who suffered the brunt of the hit. After Hanson smacked the ground near home plate, he was examined by medical staff and exited the game on a golf cart.
If momentum had not immediately changed sides on that defining play, the tide was definitely turning.
Gavello smacked an RBI double to left field. Golden hit a game-tying, sac-fly RBI to center field. Sheppard belted a ball to center field for the go-ahead run. Luke Palfalvi tacked on a pair of insurance runs with a line drive to left field. The score was 9-6.
Bismarck managed just a lone single from Weikum in the last inning as Battilega retired three of the four batters he faced in the inning to end it.
“This is a very special group of boys,” said Tri Valley manager David Grant. “I can’t say enough.
Grant, who played six years of Babe Ruth growing up in Southern Maine, said this World Series win was extra special.
“To do this in front of fans and family from New England … and win this here in Westfield and be champs is unbelievable,” he said.
Notes: O’Hara finished the World Series with a stellar batting average of .609.