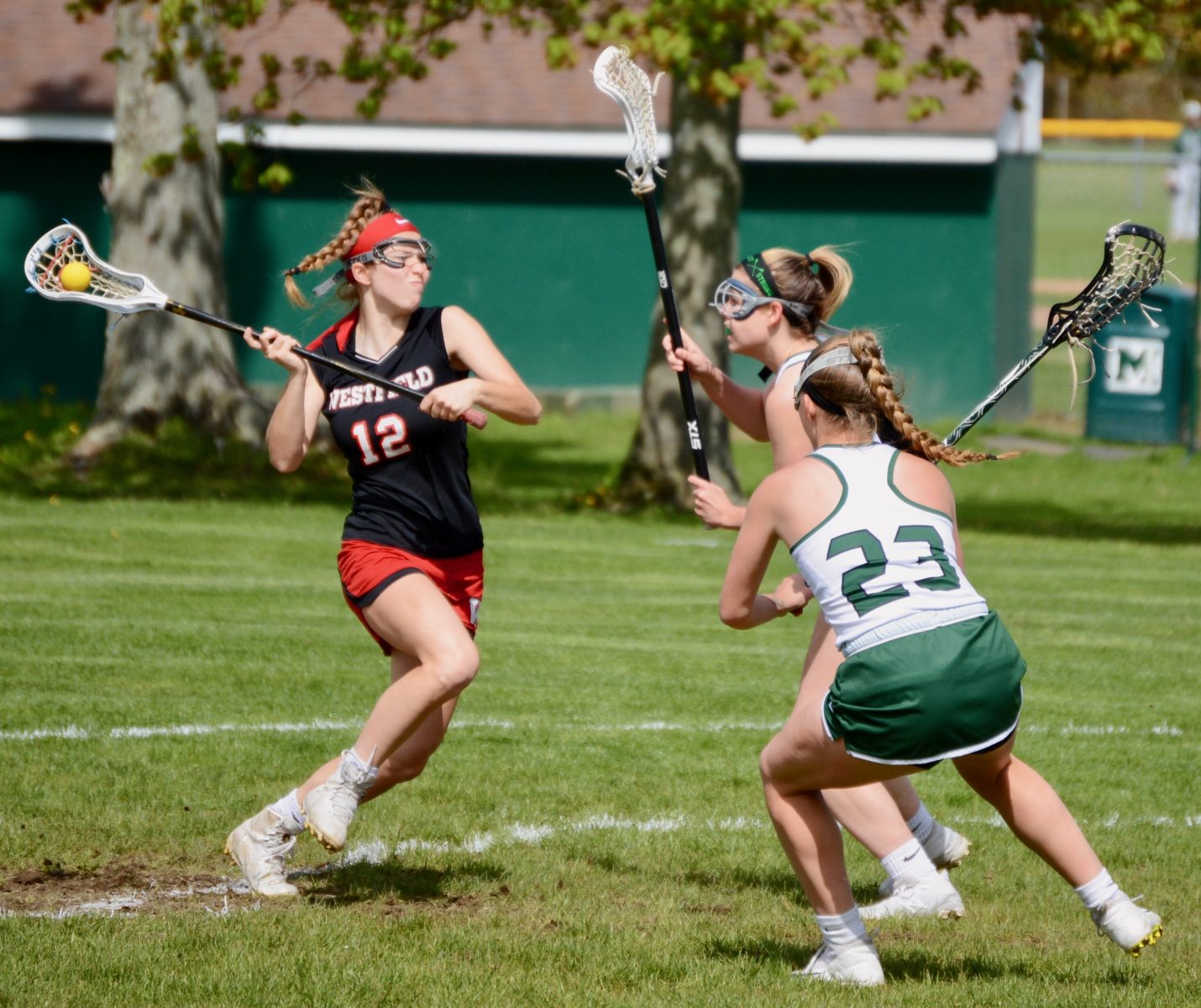 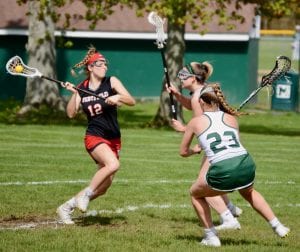 WILBRAHAM – Playing the Minnechaug High School girls lacrosse team on any given day is a tough task. Facing them less than 24 hours after an emotional tournament-qualifying road victory is a challenge unlike nearly any other.
The Westfield Bombers fell to the Minnechaug Falcons 16-2 in their fifth game in nearly a week. It was also the fourth road game during that time, a span that also included three night contests.
“The weather hasn’t helped us (either),” Westfield boys lacrosse head coach Paul Fenwick said. “It catches up to you.”
“Minnechaug is a perennial powerhouse,” he added. “We had to play flawless ball. Obviously, that didn’t happen.”
Julia Mastrio (3 assists), Aleksei Mendrala (1 assist), and Lauren Barry scored three goals apiece to lead Minnechaug.
Westfield’s Lara Finne and Emma Metcalf each scored a goal. Kylie Buchan and Olivia Hadla assisted.
Liz Clark made six saves for the Bombers (9-6).
It was not all for naught though.
Said Fenwick: “It’s great to face that competition. It can only make us better.”

Saints complete late comeback
St. Mary’s 4, Lee 3
St. Mary’s scored three runs in the seventh inning to rally from a 3-1 deficit. The Saints received big hits from Mark Nelson and Aidan Burke in the inning as well as RBIs from Colin Freeman, Brady Collins and Jack Masciadrelli.
Jack Lamirande and Nick Montanaro each had hits for the Saints.
Masciadrelli pitched a complete game, striking out eight batters and yielding one earned run.

Bombers rally past Terriers in extras
Westfield 5, West Springfield 3 (9 inn.)
Westfield rallied from three runs down, scoring two runs in extra frames to complete the comeback. Bombers’ Baley Collier and Mason Collingwood each went 2-for-4 with a double, Brian Strange doubled and had two RBIs, starting pitcher Jimmy Hagan scattered nine hits over eight innings to go along with four Ks, and Spencer Cloutier tossed an inning of scoreless relief to pick up the victory.

GIRLS TENNIS
Sabis 4, St. Mary’s 1
St. Mary’s Jessica Crosby won in straight sets against Sabis’s Emma Smith at first singles, 6-1, 6-2. Crosby lead the entire match, mixing blistering sideline shots with powerful overhead smashes to take the match.
Saints’ Caroline Leahy and Catherine Seklecki played a hard-fought long match against Katie Sharpe and Venus Nguyen.
Leahy and Seklecki traded game-for-game in the first set before falling 7-5. They then played a 12-point tiebreaker to determine the winner of the match.
The tiebreaker was as close as the first set with the teams trading point-for-point. The final points of the match were finally played at 8:20 p.m., with Sabis pulling ahead 12-10 for the win.