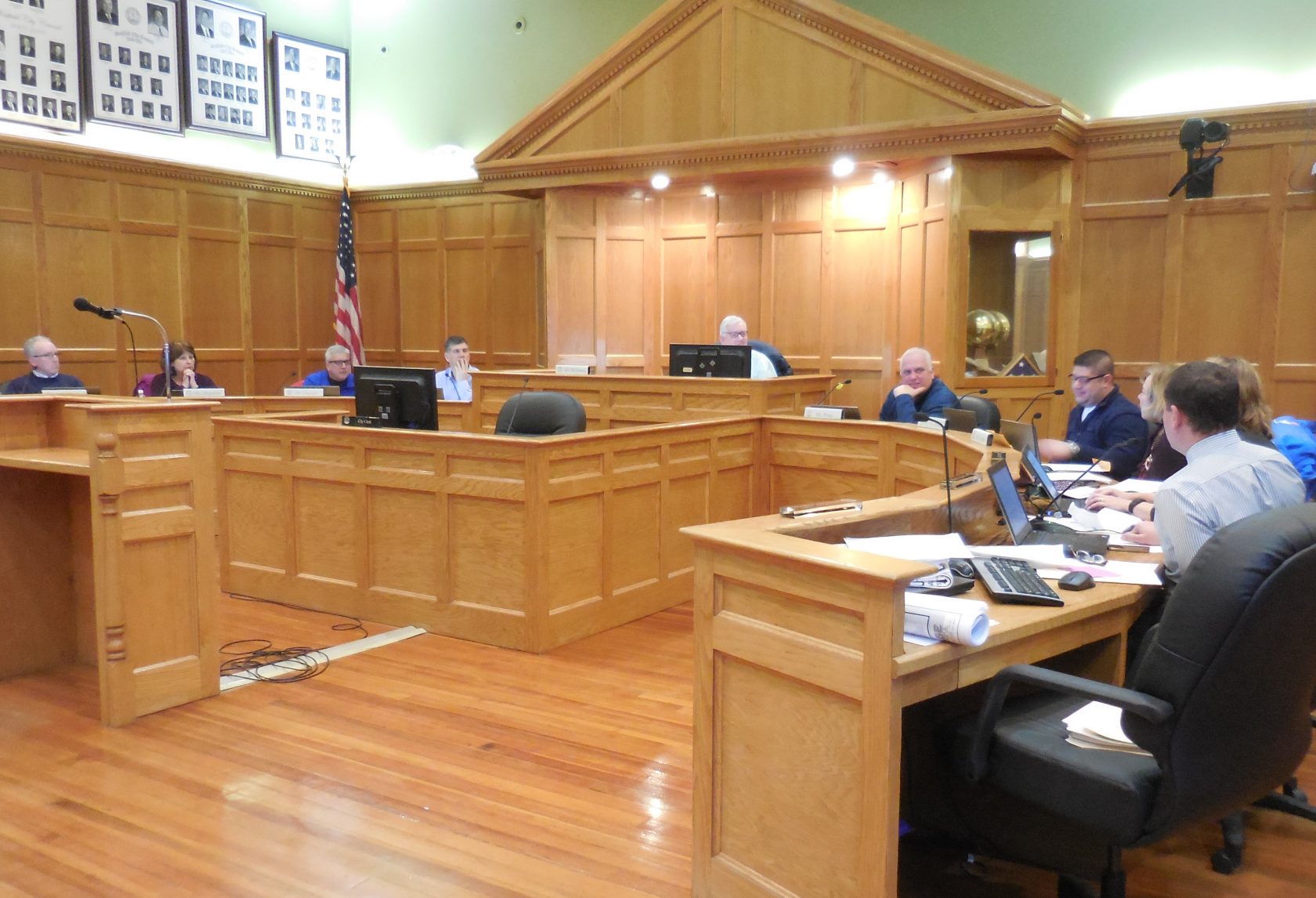 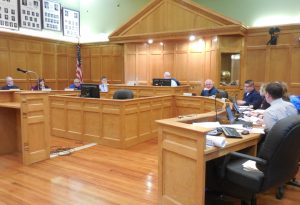 City of Westfield Planning Board

WESTFIELD – On Tuesday, the Planning Board continued the public hearing for a site plan for a school to be built on Root Road, with chair Philip McEwan stating that after the hearing portion the board would be choosing a traffic consultant to do a traffic study of the site.
Luke Showalter of Sage Engineering, presenting for Roots owner Frank DiMarinis who was not present, said he had worked on requests from the board since the last meeting, including completing the design for a sewage disposal system. He said he had an application in to the Board of Health and held the first perc tests at the site, and did not hit groundwater.
Showalter also included a 2,000 gallon grease trap and an in ground 1,500 gallon wastewater holding tank in the plans. He said the wastewater from the holding tank would be transferred offsite. He also said the plan moved bus exits away from parent drop-offs, and handicapped parking away from both.
He also asked the board when the traffic review would be completed, and requested a short turn-around.
During public comment, more questions were raised about emergency vehicle access, parking, and wastewater limits. Chair Philip McEwan said the Fire Department is not requiring an access road around the rear of the building.
Westfield resident Kristen Mello asked how the daily limit of 440 gallons per acre of wastewater in nitrogen sensitive areas had been addressed. Showalter said DiMarinis owns 60 acres of conservation land behind the parcel which should be sufficient. Mello asked if those acres are part of the parcel, and Showalter responded they are under the same ownership.
“My understanding of the limit of 440 gallons per day per acre pertains to the construction site, and that’s that parcel; not any other land,” said Holyoke resident Thomas Smith, adding, “I think there are still some unknowns as far as wastewater.”
“I’m sure you know we’re not the permitting department for wastewater. The Board of Health will make that determination,” said McEwan following the public comment period. He then asked board members to make a selection of a traffic consultant, to get answers for other questions raised during the hearing.
Planning Board member Cheryl Crowe, who acknowledged that she had missed a few meetings, said she had caught up with the reading. “What are we going to do with this traffic study? I’m not very keen on this,” she said, adding, “To me, it shouldn’t be in our area to discuss whatsoever. We’re out of our realm, losing focus on zoning and special permits.”
“Whether I agree or disagree, we voted on this at the last meeting. We’re not going to go backwards. In my opinion, it’s more a study of circulation and traffic flow onsite, rather than offsite,” McEwan responded.
“I was the one who brought up the traffic study. I was looking at the suitability of the site for the use, as well as onsite traffic. I wanted an outside opinion as to their thoughts on how all this would work. I think you can never have too much information,’ said Jane Magarian.
William Carellas said the board did not have a lot of control on the process because a school is a by-right use. He said the two areas where the board can exercise control are off-street parking and traffic flow. “At the end of the day, my use of the study is whether there is adequate drop off. There’s very little we can do here. I’d like to have a professional telling me it works, or it doesn’t work,” he added.
“It answers my question – a little out of our realm as a planning board,” Crowe said. Vinskey replied that at the last meeting, the discussion was more about traffic.
Magarian said of the four applicants she favored the McMahon group, due to their experience with schools. Bernard Puza and several other members agreed. A motion was made to recommend the McMahon engineering firm and to give authority to Vinskey to negotiate and sign contracts. Crowe was the lone dissenter.
Vinskey said the City Council will have to set up a special account, and won’t meet until next week. He said once that’s done, the city can award the contract. “It’s not going to happen within two weeks,” he said, adding later that if the City Council acts on it at the meeting, the firm gave a ten-day turn around. The Council could also send the request to a sub-committee for review, further delaying it.
McEwan said they had also received a letter from city solicitor Shanna Reed regarding the by right exemption. In the letter, Reed cited Ch. 40A Sec. 3 of the Dover Amendment, which states that no zoning ordinance shall restrict the use of land or structures for educational purposes on land owned or leased by the commonwealth or any of its agencies, subdivisions or by a nonprofit educational corporation. The Westfield zoning law also allows for-profit educational organizations. The letter concluded by saying that in this case, should a lease not come to fruition, it would not be by right, and would have to fit within the footprint.
McEwen asked if anyone on the board or in the public had any question about the letter.
“To clarify, so if the project is not used for a school, it can’t receive a building permit, right?” asked Smith. “I believe that’s what it said,” McEwen responded.
Vinskey said the difference is it has to be a non-profit school to operate under the state approval, while the city has always taken a more liberal view of educational use. He said any other use would have to come back to the Planning Board for a special permit.
A motion was made to continue the site plan hearing to March 7, if the traffic review is complete; or, if not, to the meeting of March 20.