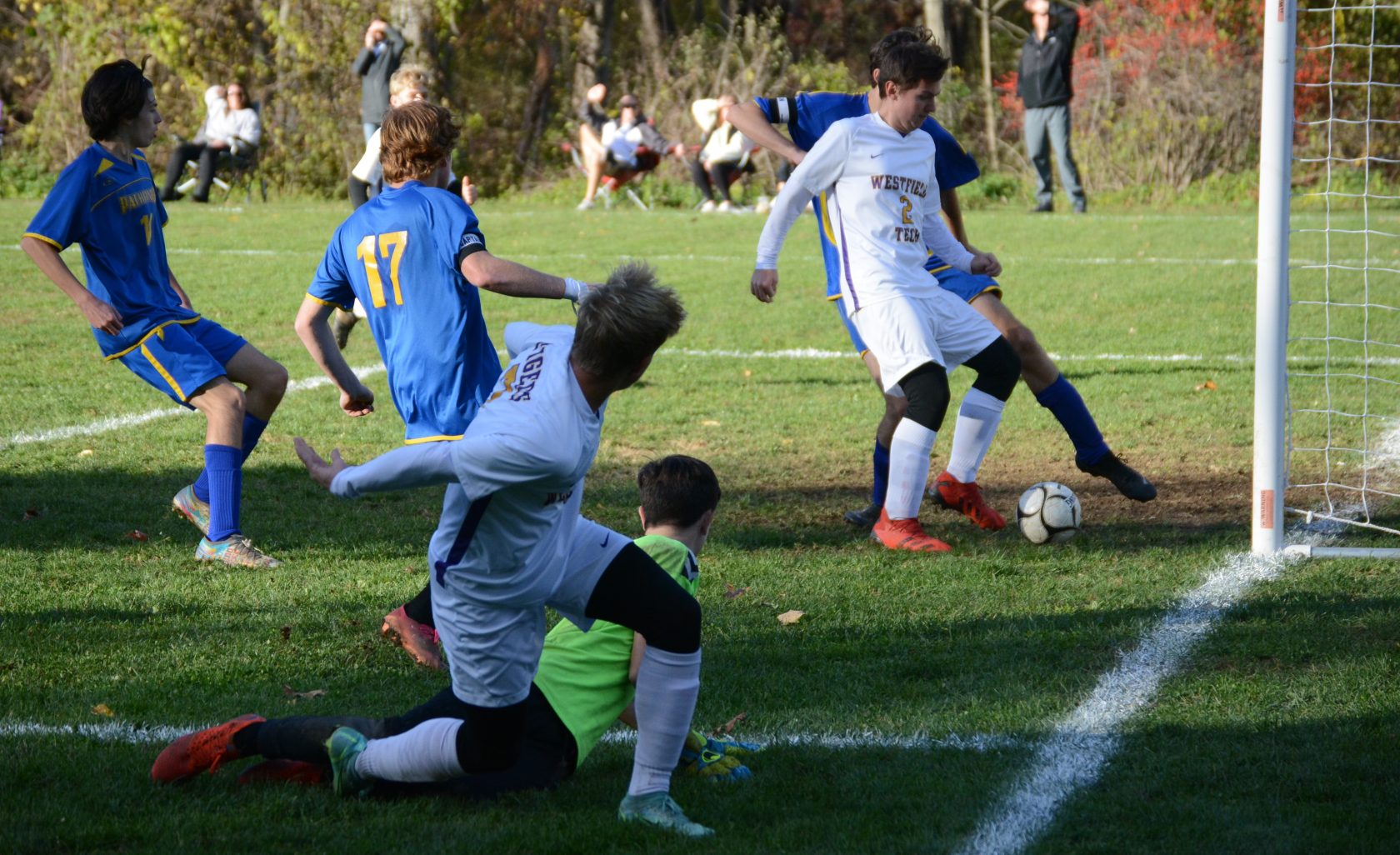 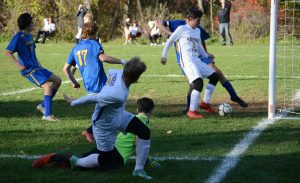 Westfield Technical Academy’s David Bulatov (7) slips a pass to Adam Strycharz (2), who in turn squeezes the ball past the near post into the back of the net during the MVADA Boys Soccer championship Monday at Pathfinder Regional High School. (CHRIS PUTZ/THE WESTFIELD NEWS)

THREE RIVERS – The Westfield Technical Academy boys soccer team was shut out of the PVIAC Class C tournament but it now appears they may have found the key to unlocking some other postseason success.
Adam Strycharz recorded a hat trick plus one, scoring all four goals in Westfield Technical Academy’s 4-2 win over top-seeded Pathfinder in the Massachusetts Vocational Athletic Directors Association Boys Soccer finals Monday on the road.
“It’s just a great accomplishment,” Strycharz said. “We destroyed the number one team.”
The Westfield Tech Tigers not only dominated from start to finish; they came away still unbeaten this entire fall season. They are now 16-0-3.
Westfield Tech came out firing. The Tigers peppered the Pathfinder goal with several shots early on, had a short direct kick, and even earned five corner kicks over the first 25 minutes.
“We came in with that fighting mentality,” Westfield Tech’s Jon Vella said. “We just wanted it all.”
All that pressure paid off. In the 25th minute, Westfield Tech struck gold. David Bulatov pushed the ball past a sliding goalie in the box over to Strycharz, who wrestled the ball away from a defender at the near post and tapped into the back of the open net.
One minute later, Pathfinder’s Dylan Pinto tied the game 1-all on a high, arcing shot from 40 yards out. A minute after that, Westfield Tech recaptured the lead when Strycharz scored unassisted. The Tigers would never relinquish the lead the rest of the way.
Strycharz made it 3-1 just before the half when a sensational floater rang the right post and ricocheted into the left corner of the net. Tim Lezhnyak assisted.
Strycharz tacked on another insurance goal, his fourth of the game, in the second half. Sean Johnson earned the assist. Pathfinder (15-1-2) scored a nice-looking goal late when Pinto lofted a shot just under the crossbar out of reach of Westfield Tech goalie Liviu Mocanu.
“We just kind of felt like to earn people’s respect, we just have to go out there and do our best and show that we can play,” Westfield Technical Academy boys soccer coach Kyle Dulude said.
Westfield Tech was playing with a chip on its collective shoulders after being left out of the new shortened postseason format for Western Massachusetts despite completing an undefeated regular season.
“Our kids definitely got the short end of the stick, no doubt about it,” coach Dulude said. “I felt bad for them but in life when things happen, you have to roll with the punches and move on. What better motivation than to try and go out there and beat the other teams that you haven’t seen during the season, and then go win the state vocational tournament.”
It was Westfield Tech’s fourth MVADA championship victory in the past decade. The Tigers have appeared in seven of the last 10 title games.
“This is what the kids pride themselves on,” coach Dulude said, noting the players’ appreciation for the championship banners hanging on the gymnasium walls. “For a dozen years now, we’ve had a very strong program. We’re not a one-year wonder.”
The question now is – – how much further will Westfield Tech go. With state tournaments beginning later this week, the Tigers are gearing up for one more run.
“Let’s do it again,” Vella said. “Why not? We’ve got nothing to lose.” 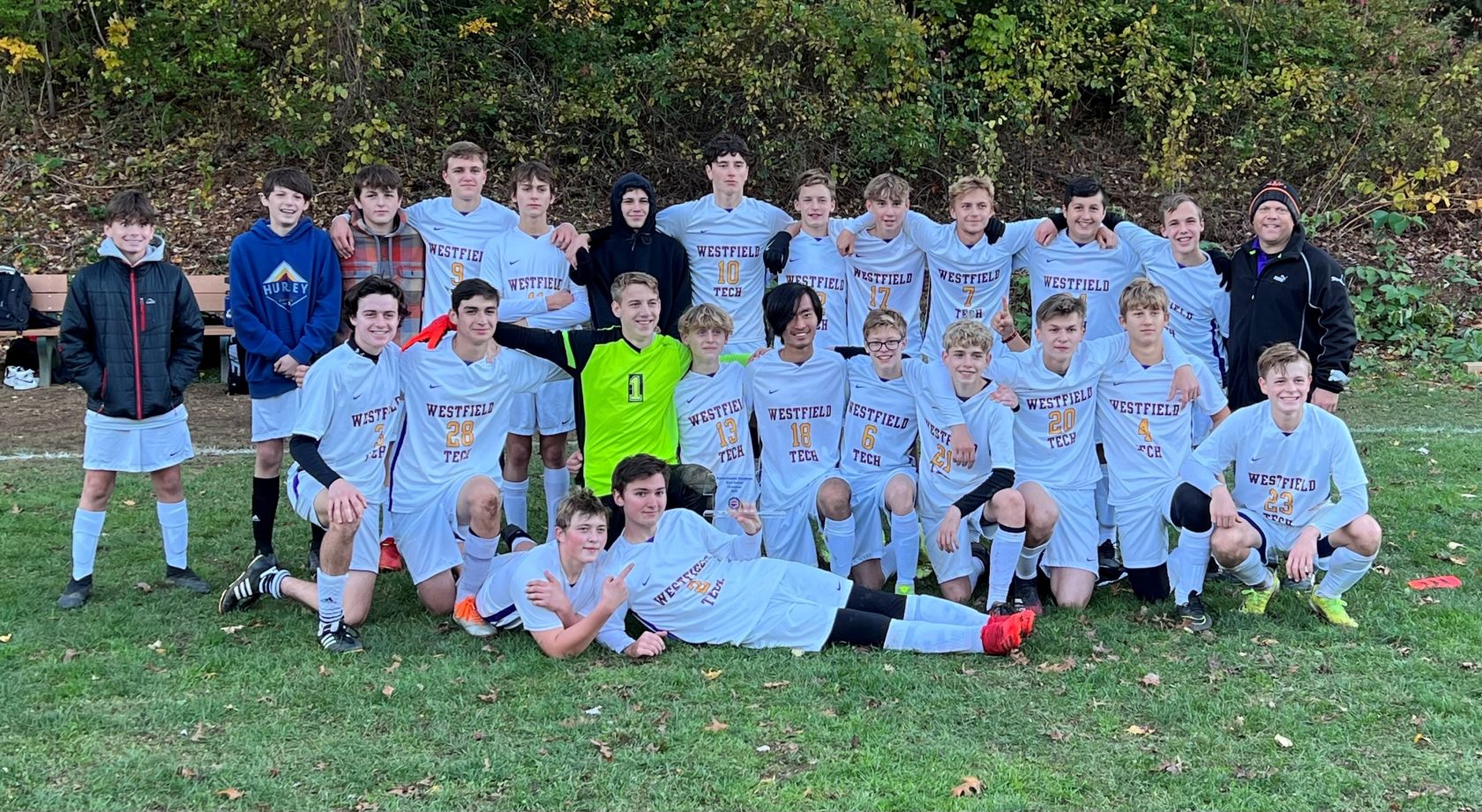