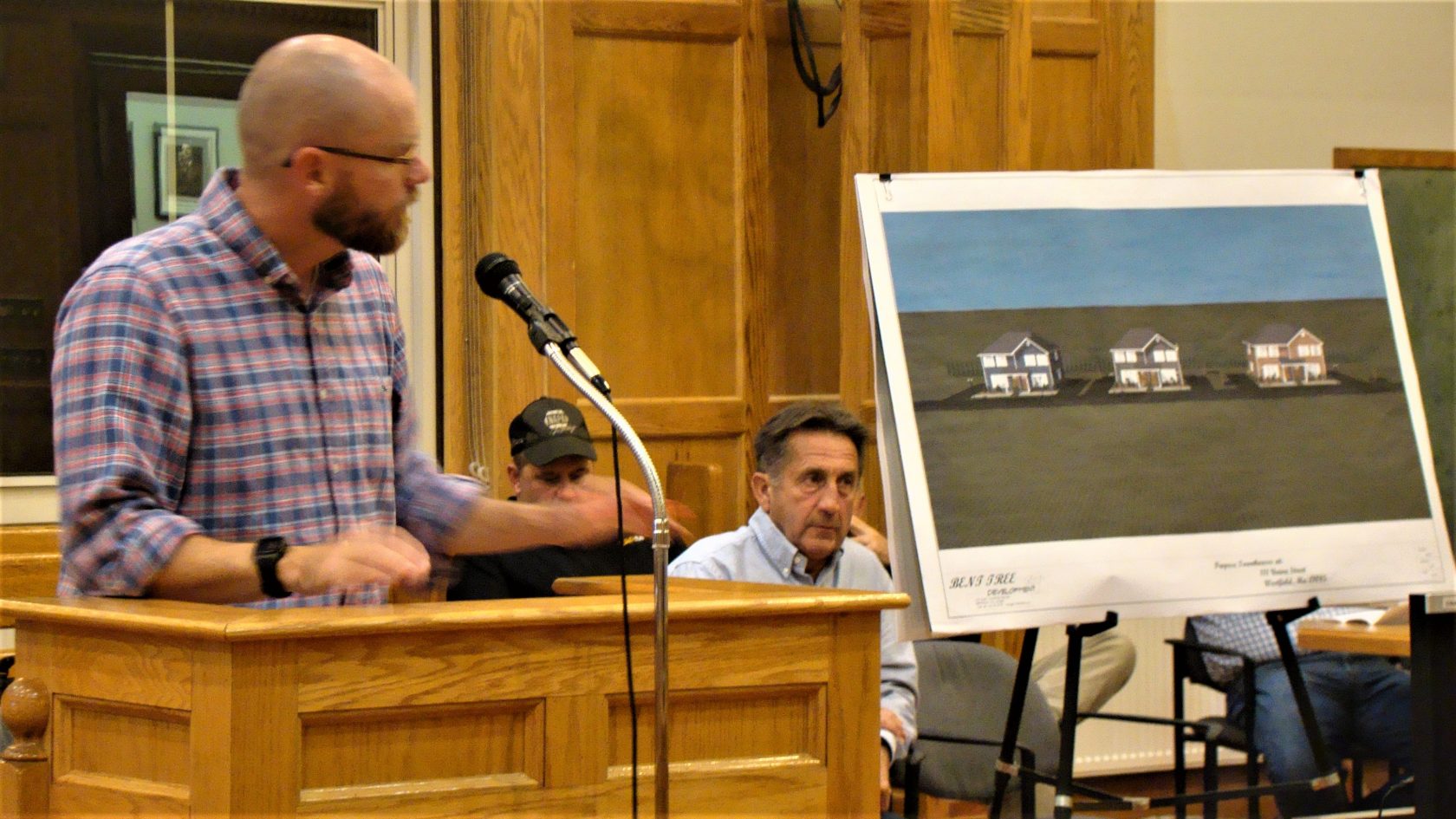 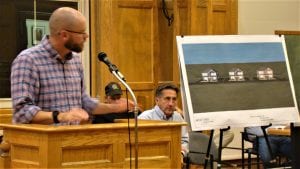 WESTFIELD – A special permit for 18 duplex units at 111 Union St. was approved at Tuesday’s Planning Board meeting, following the closing of a public hearing continued from Sept. 17.
At the earlier hearing, the development was described by Rob Levesque of R. Levesque Associates, on behalf of Mark Bergeron of Bent Tree Development, as 18 market-rate units in nine buildings, each with a living room, kitchen and half-bath on the first floors, and two bedrooms and bath on the second floors.
The plan included a sidewalk adjacent to Union Street for pedestrians, a fence around the development with a hedge row buffer. Trash will be handled by each individual unit, and bikes stored within the units.
Levesque said units such as these are not readily available on the market and go quickly. He said they will be very attractive, and meet the size requirements, adding that Bergeron had previously built residential units on the corner of Main and Meadow streets that were very well done. He said the developer plans to rent them out and eventually sell them as condos.
At Tuesday’s meeting, Levesque said the stormwater plan had been accepted by Engineering.
He then presented some minor design revisions to the earlier plan based on comments from the Planning Board. One change was the addition of an additional sidewalk to provide access to the bus stop, along with added sidewalk frontage.
Levesque said they also made revisions to the parking layout, and said they had more than the required visitor parking, with 2.2 spaces per unit. Each unit will also have two parking spaces for residents.
The lighting for the development will be placed on normal poles at pedestrian height, plus lighting attached to the front and back of each unit, to keep a residential feel. The board asked that the poles have non-glass, or covered tops.
Bergeron said the duplexes will be of uniform shape, but with a couple of different colors.
City Planner Jay Vinskey said a city requirement is that 75% of the front yard not be for parking. Levesque acknowledged that the plan was close.
“If it’s that close, we could adjust it. We thought we had a couple of square feet. We did add a significant sidewalk,” Levesque said.
Vinskey said the ordinance says landscape, which can include walkways, cannot include car-related space.
“I think it looks great,” said Robert Goyette.
Bernard Puza asked about the two entrances and exits for the development, which are described on the plans as dead-end driveways. He asked if someone pulled into the wrong entrance would they have to turn around.
Levesque said they would, but they have added wayfinding signage to the entrances.
Board chair William Carellas said for the record that they could find no record of a paper street within the development of having been accepted by the city.
Levesque said the paper street runs through the back of the property. He said if it exists, they will be looking to discontinue it and submit a petition to the City Council for an easement to the sewer line.
Carellas listed the conditions for the special permit, including signs designating the parking for the units, adding three sidewalks, and adjusting the plan if needed for the 75% frontage requirement. He said as described by the builder, the units would have the same shape, and different colors.
The board then approved the special permit, site plan and stormwater permit on a unanimous vote.